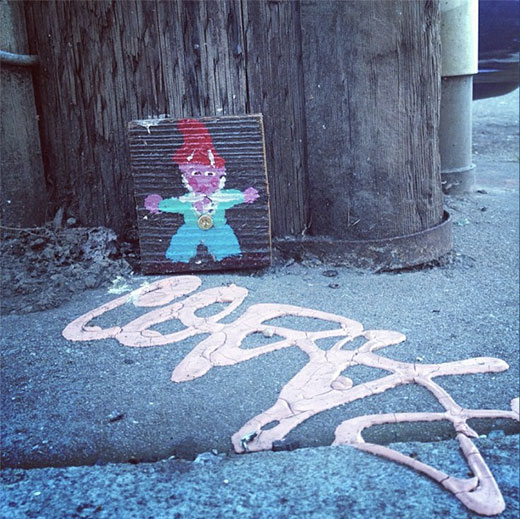 I live in Paris, France, essentially half-way around the world from Oakland, California, but this was my first exposure to the gnomes of Oakland in Rena‘s instagram feed [above]. At the time I didn’t know it was part of something far bigger. That was 5 days ago. Then Landon, knowing me well, kindly sent over these two articles in the SF Gate + PG&E Currents shedding some light on the situation. Clearly word was spreading and Marisa posted this article from The New York Times. Gnomes, in The New York Times!?! My heart skipped a beat. Then I realized I was reading the part of the story I wanted to hear, but these articles were really there to tell a different story that was not as fun. 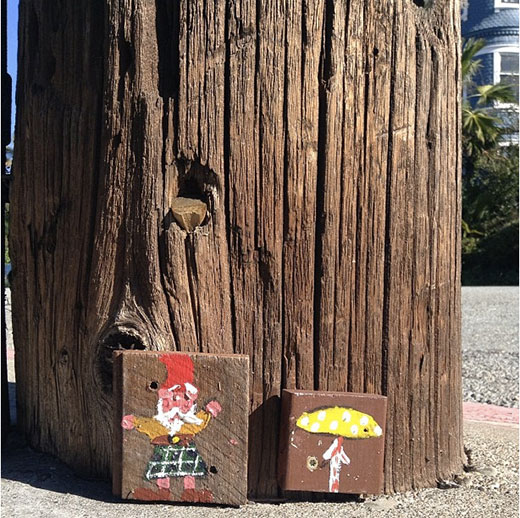 {Marisa shared this kilted gnome with me that she discovered on Thanksgiving Day. Did you know gnomes in higher places wear kilts? Seriously.}

I came across this piece by Rachel Dornhelm and realized THIS is the story I wanted to tell. Seriously, did you LISTEN? Have you stopped grinning in delight + choking up in awesomeness?

I decided I had to know more and put this tweet into the world:

“Anyone in #Oakland have snapshots of the mini #gnomes around town. Would love to share them with the world on PAV!”

Then, something amazing happened. Half-way around the world, an email arrived in my inbox a few days ago asking if I really wanted to know more, and if I could be entrusted with the anonymity of the Maker. Through multiple exchanges the story unfolded. From this point on, I’ll let the gnomes help tell their story… 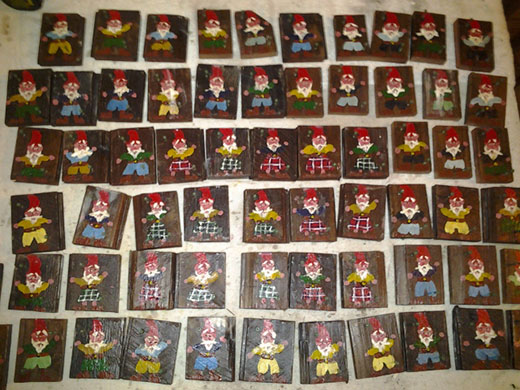 A Year in the Making!
The first batch of about two dozen went up on our street the second week of January, 2012.  And that was it, for over a month.  Then one day while walking down the street, came across a group of young children, and they were running from pole to pole.  They had names for the gnomes, and stories to tell about each one.  At that point [our Maker] painted a dozen more and took them into San Francisco for his nephew who lives in the City and is only 6, and wondered what he would think.  I’m guessing you can imagine? He liked the kilted ones best (they go up in the hills).

Tending Herd.
The thing is, it has become much more than a kid thing as they grew.  The greatest joy is walking the streets of Oakland (“tending herd” as we call it) to make sure none have been removed, and engaging strangers about if they’ve noticed the gnomes.  And there are great stories every time.  From children, of course, but even more surprising from adults.  A favorite was a guy with gold teeth and pants hanging around his knees selling really bad pot, who was scary as hell, yet told [our Maker] when asked if he’d noticed he responded: “Don’t worry about them man…it’s an Oaktown thing…just and Oaktown thing” as if he was the responsible party. Everyone claims ownership, which is why [our Maker] has been so adamant not just about me remaining anonymous, but so that no one else being able to claim them either. 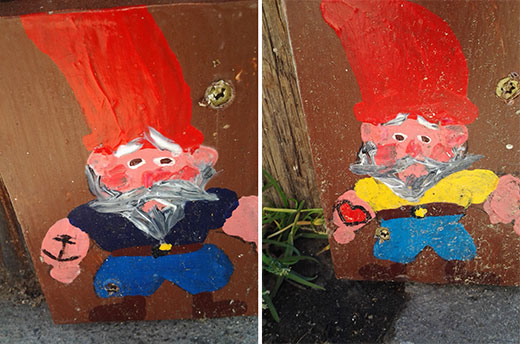 Where?
We usually pick a geographic area, putting one on every wooden telephone pole, filling in block after block, facing away from the street, with mushrooms (amanita muscaria to be exact, in red and yellow) next to the gnomes in key areas.  This way we form a community.  On a hill so you will find highlanders [in kilts].  Not every place in gnome worthy.

An artist?
We need to mention something.  If it’s not obvious, [our Maker] is not an artist, nor do does he pretend to be.  The smallest thing he painted before last January was a wall in his house.  But hope you can see the point that this is supposed to be so much more than small works of art, much more trying to help people find pride in their community.  And yes, if you’re wondering, his grandmother would say that’s a bunch of horse-feathers.  But then, her idea of heavy reading was the Reader’s Digest.

For [our Maker] it was the Huygen/Poorvliet book, given to him as a child by  Aunt Lois.  Who also always had terriers.  Yes, there is magic in the world. 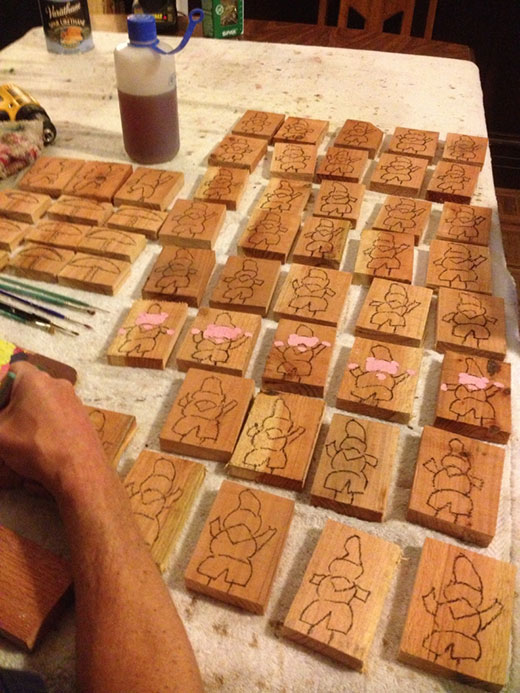 Next?
There’s a lady who posted on a Facebook page “We need some Gnomes in East Oakland around Eastmont Mall!! Magic is something that can grow.”  Her neighborhood?  When one hears about shootings in Oakland, probably 1/3 are within twenty blocks of her home. And there’s an elementary school there with four telephone poles in front of it, two on its side.  They are getting every gnome [in stock].  She deserves them for believing in magic. 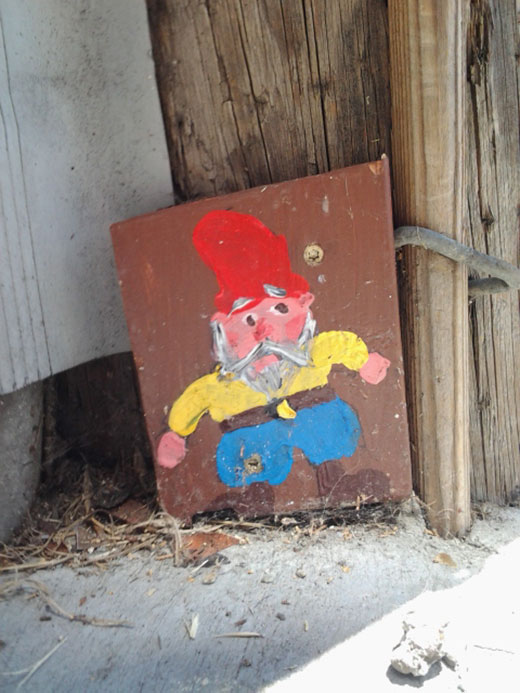 Why me?
In the middle of that school of unidirectional fish swimming nowhere, we saw “Anyone in #Oakland have snapshots of the mini #gnomes around town. Would love to share them with the world on PAV!”.  Would you believe you were the only one that [our Maker] saw today who was more interested in the gnomes themselves than in fighting PG&E for being “the Man”?  And it didn’t hurt that you used a picture of gnome.  It’s hard to find genuine people in this world, even with the magic that is the internet, because there just aren’t that many.

As with the French snowmen I discovered who looked different than anything that was familiar with until this point in life, I’m always amazed by the simplest things that can change the way we see things. I’ve long had an affinity for gnomes thanks to my aunt and cousin. In Amélie, the traveling gnome teaches Amélie’s father that there is a world to see outside of his home. But these gnomes are different. They make you look at where you live in a new way and find the simple joys. I don’t think I’ve stopped smiling to myself since I met them – even from afar. In my multiple discussions with the gnomes’ Maker I started to realize that I too believe in magic. But it’s not the magic that I grew up with: a man in a black suit and top hat who does tricks. No, real magic happens in the world around us when you make a little extra effort, and start opening your eyes a little wider.

p.s. While so much of the joy in the discovery of these gnomes, not knowing where they are, I do think someone in Oakland needs to sign up for my Map Making class and make a map of these little fellows who bring such delight to the world!