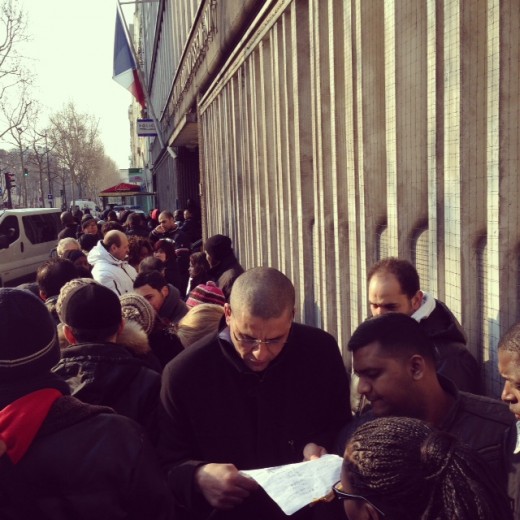 There are certain situations in France that you have to live through to believe. While I can’t trump my friend’s recent trip to the Prefecture where she went in because after 2+ months she hadn’t heard any updates – only to find out that the person dealing with her account had died, and the boss had been on vacation for the past month and still didn’t know – my adventure this morning is mainly mind blowing for its lack of drama. There’s really nothing like it in America. And the really painful part is that this step can be completely avoided. What can I say? I’m striving to have every possible experience in Paris!

The Backstory
To legally live in France as a foreigner you have a visa in your passport and every year you get a new carte de séjour that validates it. There are different kinds depending if your a student, worker, etc, and jumping between them is another challenge. Alas, after changing my status a year ago, for me it was pretty simple – I just needed to make an appointment to renew my card. Alas, my actually planning ahead to make my appointment 4 months in advance was not adequate. I knew you couldn’t book too far in advance, and actually intentionally held off making my appointment, only to find our that the soonest appointments were a months after my card expired. Hence I needed to go to get a récepissé to temporarily hold me over until my official scheduled visit.

This Morning
I live in the 11th arrondissement, but for getting my récepissé I needed to head to the 14th arrondissement, or one of the least direct places from where I live. The irony of course is that it’s good that I spent an hour on hold trying to find out what to do + where to go when I couldn’t get a proper appointment, because the information on the website would have sent me to the wrong place. Yes, this is typical behavior.

Knowing they opened at 9am, I arrived at 8:15am. There was already a crowd – not a line yet – but figured it could have been worse. Thankfully an older gentlemen caught my attention to have me sign up on the very unofficial notebook piece of paper. I was #62.

I had my copy of Bossypants out, and ended up striking up a conversation with a Canadian because of it. He had arrived at 6am, put his name on a list and then had a coffee until closer to the time. He was already #30-something. Yes, seriously. (Stay tuned, there’s more later).

About a half hour before opening, there was a bit of commotion near the entrance. We were all there for paperwork – either renewals or first time cards. Every day it’s a new group of people who line up, yet it became a fascinating study on leadership. A couple guys grabbed the list and took charge. 30 minutes later we were all in line. Thankfully we had sun for the first time in days, so I got a bit of Vitamin D in my life, despite later losing feeling in my feet. (Above you can see the view from my spot, and the unofficial list to keep order. The guy with the list is just one of us. No authority is around.).

Spoiler Alert
From the point in this image it took me 4 hours and 30 minutes to get my récepissé – a transaction that was highly uneventful and took literally 5 minutes. Can you say “design flaw”?

The Experience
While my previous visit to the Prefecture had taken 4 hours (where I learned to always pack a snack!), I never in my wildest dreams expected that could ever be repeated. Lesson: always go in with the lowest expectations possible. For the past 3.5 years I’ve been trying to take this approach, but don’t always set the bar quite low enough.

A little after 9am the line started to move as people entered and went through security. In the 14th arrondissement the Prefecture is part of the Commissariat/Police Station. The strange thing is that everyone going for their paperwork pretty much covers the entire front of the building leaving no room for anyone with a real problem to enter. As a graphic designer I can only notice the complete lack of signage communicating anything of importance to anyone. Thankfully everyone in line is in it together and helps out those lost souls. Thankfully too, I befriended the people in line as we cracked jokes before we started to reach insanity, still outside 3+ hours after arriving. What was perhaps most staggering was how few people we saw exit.

The main saving grace was having a brief conversation with a woman in front of me, who mentioned photos. While I’ve written countless times the need for ugly photos of yourself in France (even for a pool pass), I had completely forgotten this step myself with the focus on have every possible document known to man with me (I really only needed my ID, carte and photo for this step, but it was never communicated online). So my kind neighbors in line held my spot in while I hustled to the metro – nearly numb now from barely moving – to get my regulation ugly photos: not smiling, hair out of my face, and sans jewelry in the Photomaton. Continuing my streak, every year my photo gets less and less attractive. It was a good thing I did pop out to get it, because there was no Photomaton inside (and there is one at the main Prefecture). When I got back to line, it had not moved at all. In fact, no one exited or entered for another 45 minutes. Even the very pregnant woman with a stroller only got as far as inside the main door, not into the main room.

About 3.5 hours into my visit I made it inside and took my ticket (an official system this time). While I was freezing outside, the sun was welcome compared to the stagnant air inside the room that only had chairs for 45 people. I immediately saw my Canadian friend (Mr. 6am) still waiting on the side and went and sat next to him. He still had not been called. He gave me the de-brief of the happenings inside for the past few hours saying the average visit was taking 45 minutes, with the exception of the renewals (like me) which were much faster, and had a separate guy handling them, who was far more efficient than the rest. It was clear he was approaching insanity, but we had some good giggles analyzing the pure dysfunction of the world around us. However, I’m sorry to report that by the time I left – 6+ hours after first signing the sheet – he still hadn’t been called, let alone not knowing the situation with his papers.

The Highlights
This morning was a reminder that Paris is a village, and a very small world. Someone who follows me on Instagram happened to be in the exact same line (and took a similar picture), and I connected with another Twitter follower, which was a nice treat. As I’ve said before, a sense of humor is always key with these things. The people around me helped make the best of the experience, but I wish that none of you ever have to experience it first hand!

In Conclusion
Dealing with French bureaucracy is on par with the speed of those they believe they should be in the “fast lane” in Paris swimming pools. The entire experience is mind numbing, mainly because it doesn’t make sense. 6 hours after being home, I still feel dehydrated (there must be a word of fear of drinking water in the Prefecture for fear of having your number called while you go to the restroom) and completely exhausted. I see what I experienced today as both as a communications problem (lack of proper information on the website, and in person), and design issue (use of space, lack of fresh air, complete lack of efficiency). The guy at security had tried to tell me the day prior that the wait is rather extreme now, but having lived through it, I believe it now. I honestly don’t think people who arrived by 10am were able to get in before closing (4pm). When it comes to bureaucracy in France, sometimes it’s best just to be real.

For more on Life in France, click here! You can learn more about French bureaucracy in this post.