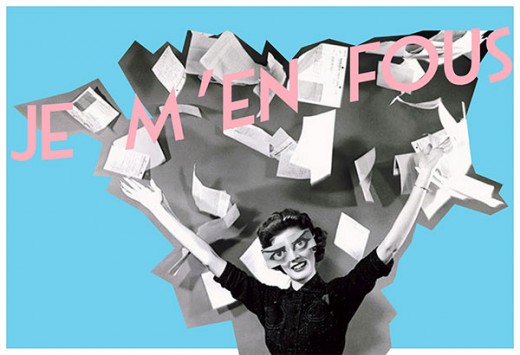 A couple months ago my friend Yann-yves O’Hayon-Crosby had shared a tale of French customer service on Facebook that made me chuckle. I said to myself, this needs to be a post. Besides being a talented filmmaker/photographer/videographer Yann-yves also happens to be Franco-American, so it only seemed appropriate that he could provide a more balanced and insider perspective on the topic. Special thanks too to Ana Clara Soares for the accompanying graphic – a “bonus” French lesson! Je m’en fous = I don’t care! But without further ado, French customer service, explained by Yvan-yves.

Today is my birthday [ed. note: today is no longer his birthday], and to my annoyance as a Dartybox customer (my ISP) I woke up without Internet. Yesterday I ran the Paris Half Marathon and was looking forward to today’s recovery while answering my birthday wishes, sending some emails and watching a Scorsese/DeNiro Marathon. I called Darty – and Cedric, the customer service person, was very nice; when I mentioned that it was my birthday he brightened up even more. I got my Internet back in an hour, turns out it was a technical problem in the neighborhood. It seems French customer service was surprisingly generous to me on my birthday.

Unfortunately, this is more of an exception than a rule; good customer service in this lovely country is something to be desired.

I recently went to the Sorbonne on a second attempt to get my sister’s diploma. She’s currently studying in Beijing and because of the Sorbonne’s renowned clarity and organizational skills, she couldn’t pick it up until a few months after she left. My first attempt was in August, when the website said that it was open. Lo and behold, when I got there it was closed. This isn’t the first time the Sorbonne has played me. I once had to get my sister’s [test] results and ended up on a wild goose chase, going from building to building, from arrondissement to arrondissement (3 in total) to finally get the desired sheet of paper. On the bright side, I got a few nice brother points.

PASSING THE FLAME
One thing I have come face to face with many times in France, whether it was from dealing with administration or customer service, has been what I call the “passing of the flame.” You approach someone who seems appropriate to help you out, and that person – instead of being charming and welcoming – is annoyed or blasé. You tell them your problem, and as you explain it, it feels like the person is being given an immeasurable burden. This is usually accompanied by a strong, distinctly French sigh. In some cases they find the solution, as you can only hope that this uncomfortable encounter finishes quickly for both parties. After all, neither of you want to be there at that moment. In the case where they don’t find the solution, or that they can’t/ don’t want to take care of the problem – but another department/person can – they brighten up because you, the burden, will soon disappear. Suddenly they act as if the sun has come up for the first time, and their spirit rises. The person is ‘vraiment désolé’ [very sorry], with a twinkle of sincerity somewhere in there. Or maybe not.

3 STAGES OF CUSTOMER SERVICE
(DEALING WITH ADMINISTRATION IN FRANCE)
The person is unhelpful/doesn’t treat you right. You think to yourself, did I do something wrong? But no! I was polite.   You start thinking that this is the way it is in France, that the word “service” in “customer service” is the idea that they are rendering enough of a favor by just dealing with you and not solving your problem. When the person realizes that they can’t help you anymore, their mood suddenly changes and they become understanding and generally much nicer because it is no longer their problem.   Then every once in a while you get great service in France. It’s rare, and deserves to be cherished – and even blogged about. You tell friends, you feel good, and it makes your day. Until someone reminds you that that’s how it is in the States or other places in the world, that that’s how it should be. Then you get frustrated again.

Some say the French don’t like to work, that they don’t like doing their jobs. The truth of the matter is, in my opinion, that most of the time they just would rather be somewhere else. Frankly, who can blame them?

Text by Yann-yves O’Hayon-Crosby (@yocsb4 on Twitter). Graphic by Ana Clara Soares (@akaTheBananas on Twitter).  Check out a sneak peek of Ceci N’est Pas de L’Eau, a documentary about cachaça that the two have been working on!