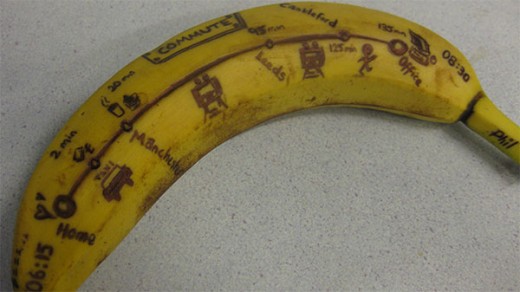 I had the coolest group of 731 students from 34 countries on all 5 continents in the Skillshare Map Making class I taught in March. There were so many projects I loved, and many students are still working on theirs (you have access even after class ends), but today’s post is to share a handful of my favorite, most memorable and intriguing projects to help spark your imagination! UPDATE: The class is now ongoing and you can sign up anytime!

Image above: Phil Francis‘s morning commute on a banana! “This is my hand drawn map of my journey to work; drawn on a banana.  It is inspired by linear maps and your average train route map. I’ve tried to annotate the map with the things of interest along the way, and also the timings (minutes from home) and the transport mode. Why the banana? Well simply I had it to hand (I was on my commute) and I’ve always loved the way a biro writes onto banana skin – if you haven’t tried it I highly recommend it! :)”. More on Phil’s project board. 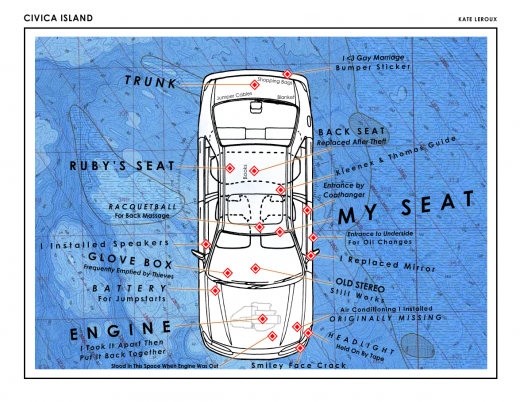 Image above: In class I made the point that maps did not have to be of real places. Kate Leroux’s Civica Island made me smile. Her little descriptions are quite clever. Read more on her project page. 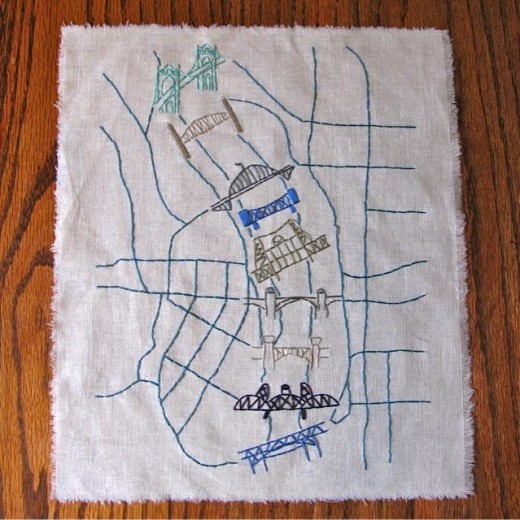 Image above: I was so excited when Katrina Emery signed up for my class. Needle and Compass is her blog and Etsy shop where she sells embroidered maps. Her final project was a map of Portland’s bridges: ” I kept it at a gray/blue color scheme to reflect the lovely Portland weather, and kept the background map pretty simple with just major streets. I also chose not to emphasize the river, other than the bridges going over the empty space. I really loved taking a closer look at the bridges in my city–now I feel like I can recognize and name them better, as well as actually knowing where I am! I guess if that’s the ultimate goal of a map, then I call this project successful.” Read more about her project on her blog and Skillshare project page. 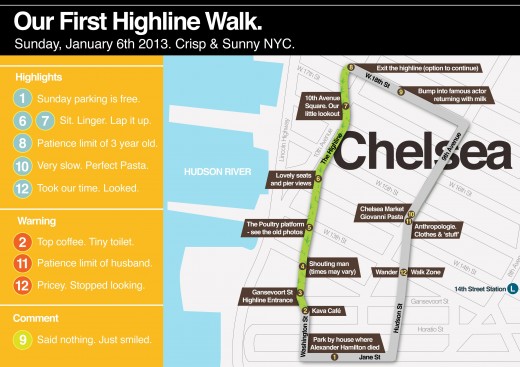 Image above: Make sure you take a look at the fine print of Philip FitzGerald’s High Line map (with Vignelli inspired graphic standards). It’s an entertaining twist on what looks like a city-issued map. Read more on his project page. 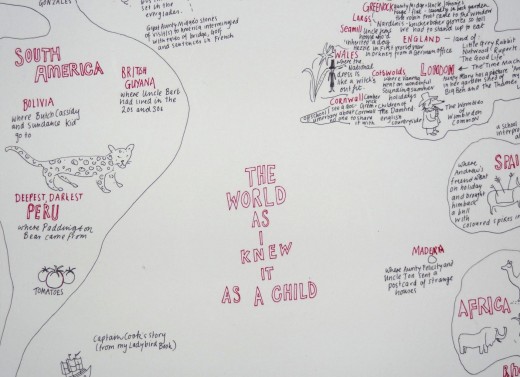 Image above: This map of “The World as I Knew it As a Child” by illustrator Trina Dalziel was part of the early exercises in class, but it stuck with me. She did it all in one sitting and I love her little commentary and seeing how children’s books helped influence her view of the world. You can see more details on her project page, and more creative maps she created in class. 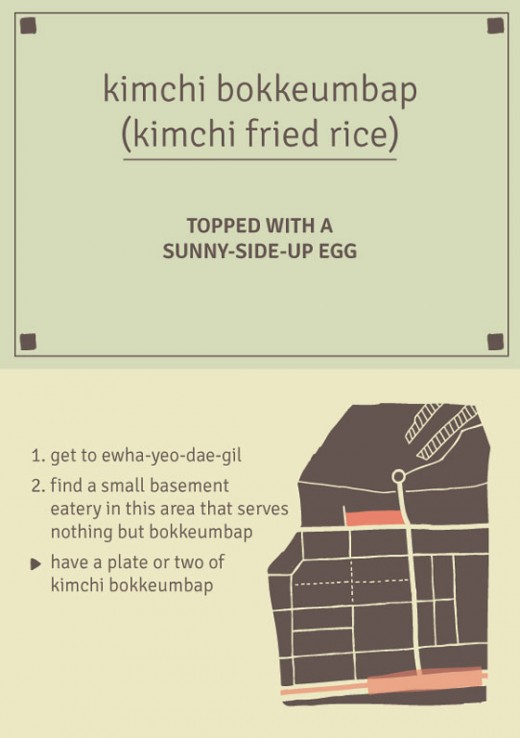 Image above: Trixia Yong immediately caught my attention for the map of her desk from the perspective of an insect, but for her final project she started to develop a series of cards for an “Edae Food Adventure” to help discover food in Singapore. Makes me want to go visit and test them out! Read more on her project page! 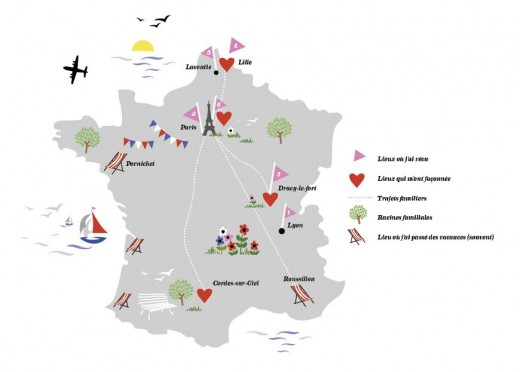 Image above: Fifi Mandirac is a French graphic designer based in Paris, but has lived all over the country. She created a map to help show these places. See the process from sketch to this on her project page! 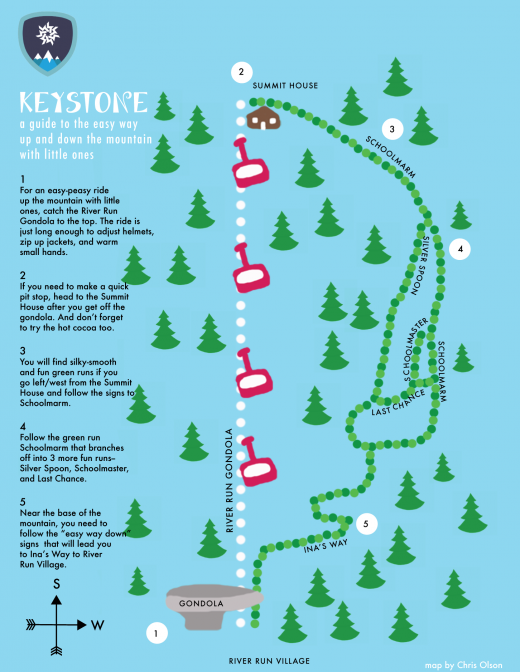 Image above: Chris Olson lives in Colorado and loves to ski. As a former ski instructor and mom of two, she created this map of Keystone for kids. See more on her project page! 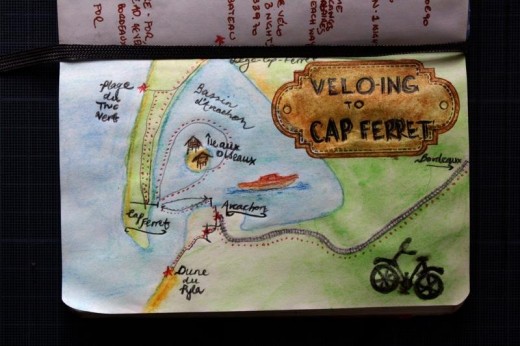 Image above: Lauren Lou Bate is an Aussie living in Paris. For her class exercises she used it as an excuse to help plan her bike trip in the south of France. There’s tons of great inspiration on Lauren’s project board!

Image above: Early on Jean Manis decided she was going to map Ginger’s (her dog) walk. Jean did an amazing job documenting her process and experimenting (she even had maps made out of candy!) on her project board. 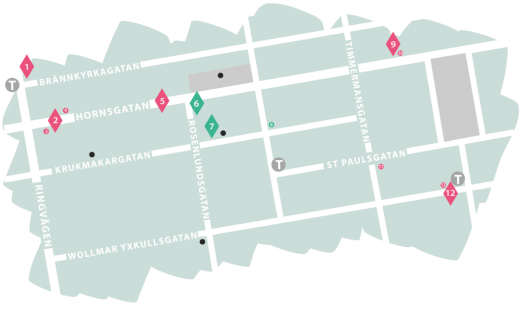 Image above: I appreciated this Scandinavian simplicity of Johanna Forsman‘s map of Stockholm. There’s more on her project board.

Image above: One of the most inspiring things about this class was seeing students push their own projects after being inspired by the work of classmates. Kelsey Kreiling made a map of NYC, and then after discovering a Pugly Pixel tutorial on animated gifs, made this awesome version where the dots and images filter through. Even Katrina (Pugly Pixel herself) was impressed with how Kelsey used the technique! See more on her project board. 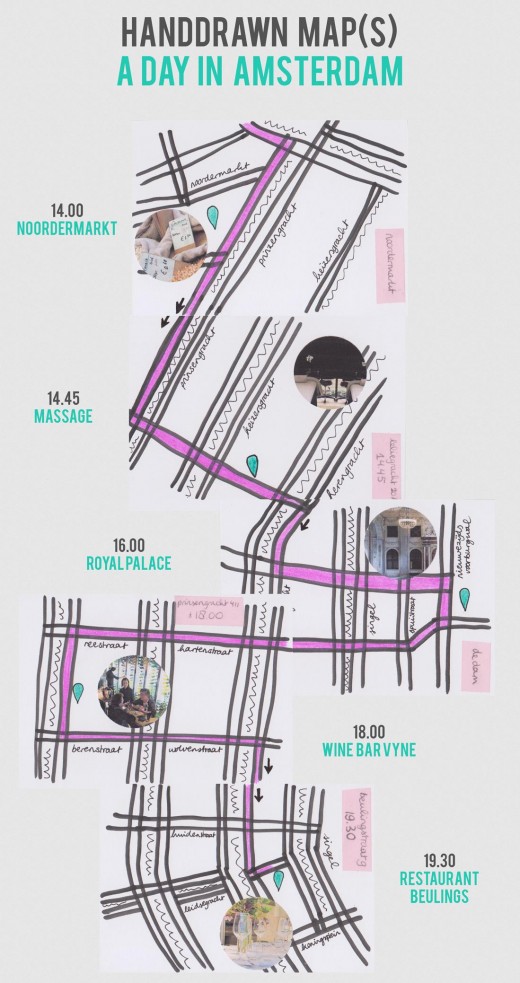 Image above: It was fun to see the way that Naomi Den Besten was able to combine hand drawn and digital in her map of Amsterdam. I also liked how she not only mapped the route, but the times as well. You can read more about her concept on her project page.

Huge thank you to all my fantastic students and inspiration! Every day when I logged in to the classroom a huge smile seriously appeared on my face. You brought so much to the classroom, and I can’t thank you enough. Keep on mappin!

If you want to make some maps, you can SIGN UP here for Map Making, an online class designed to be taken at your own pace. It will be based on the same lectures as before, but likely with some new inspiration thrown in.  It’s more fun with friends, so share this link: http://skl.sh/11RQ8Ig