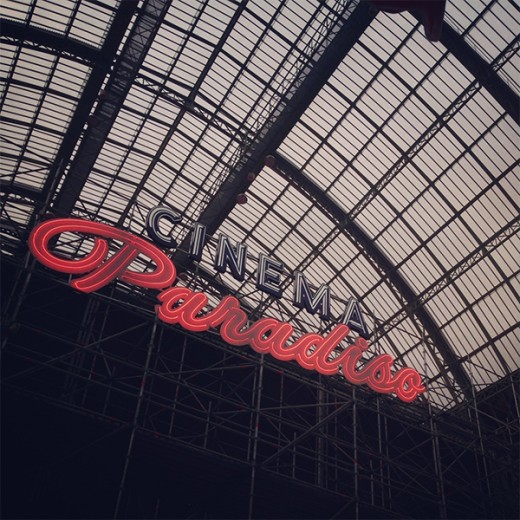 Imagine a location built for the 1900 Universal Exposition (and feels like it belongs in the Great Gatsby) complete with cinema, roller rink and diner. Paris has envisioned such an event: Cinema Paradiso, a collaboration with cinema MK2 and the Grand Palais. I took my French friend Sophie along, and we could best describe the event as a French interpretation of the American Drive-In and diner experience (that even involved nearly an hour wait for a burger, which seems to be a trend in Paris). 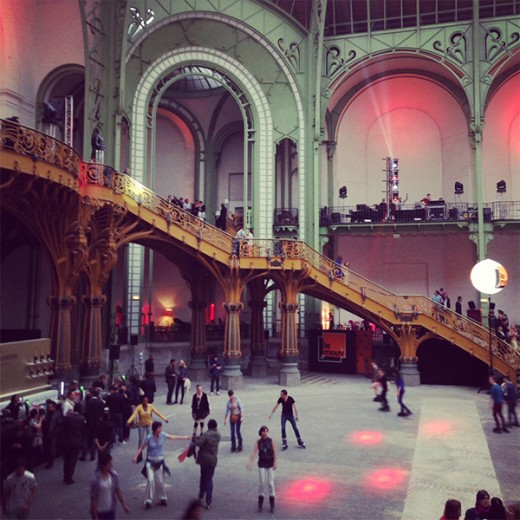 In my opinion the true highlight was the roller rink – specializing in roller blades – where you hear the sounds of the DJ (good stuff!), which are a bit muffled elsewhere in the expansive space. Not only do you get a workout to good vibes (the space turns into a dance club late night), but there’s a Moët & Chandon champagne bar right on the “rink.” Only in France! … Side note: bring SOCKS! 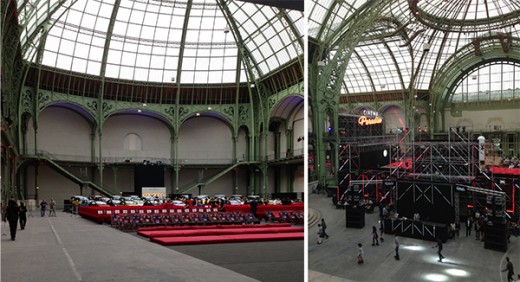 The cinema section is off one of the other axis, and is blocked off unless you have a ticket. The VIP Fiats (for those who splurged for the tickets that included champagne) are in the back, with cushioned seats and beach chairs in front. Because it stays light so late, the “early” show happens at 9pm, followed by 11:30pm, and on certain nights 1:30am! Films include such American classics as Grease, Dirty Dancing and Taxi Driver. UPDATE: After seeing a friend post images from his viewing of a film last night, the space appears to be even more magical at night. 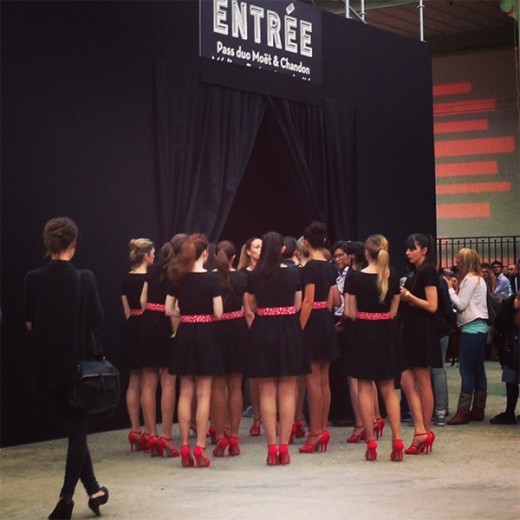 Only in France would you see such chicly dresed ushers in your summer drive in! 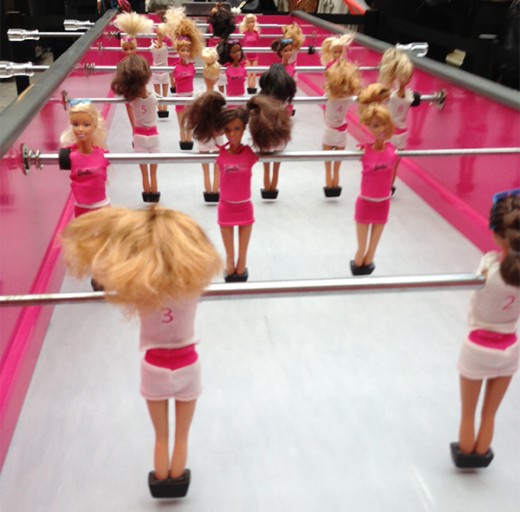 Another wing of the Grand Palais is commercial meets art, where there is a bit of both worlds if you do some exploring. The Barbie “foot” table made me smile. There’s a working foosball table next to it for real players, as well as a video game and pinball section on the mezzanine above the roller rink. Oh, there’s also a ton of “American” food for sale in the Collette gift shop as you enter. Pop Tarts or Lucky charms, anyone? 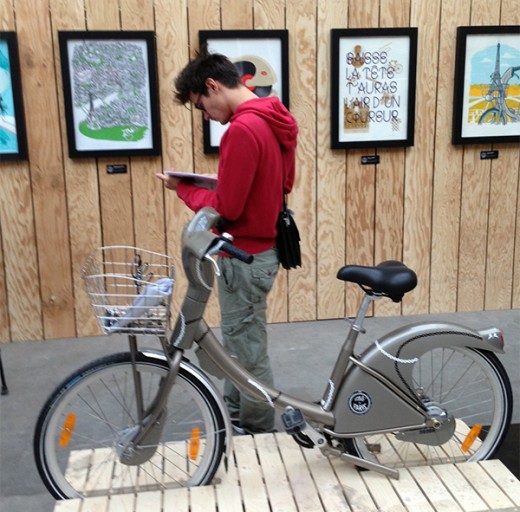 I also enjoyed the section with Velib’ x Paris bike-inspired posters from various illustrators around the world from ARTCRANK. Soon they’ll be available on WAWG.fr. 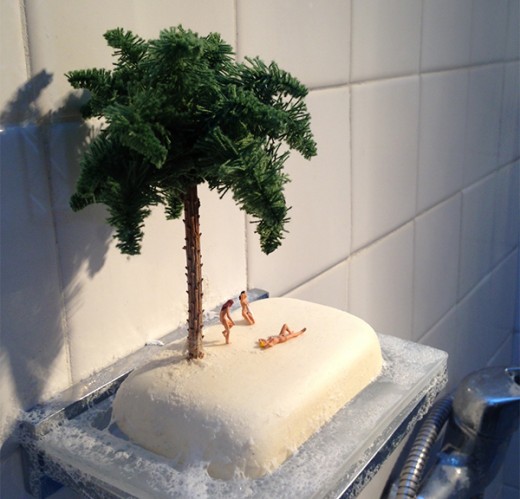 And who can’t smile at a scene on a bar of soap? There’s some interesting stuff, but you have to really look at times. 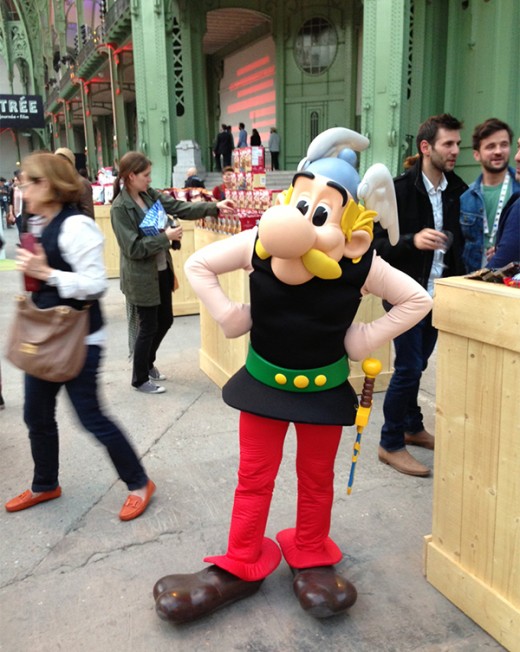 Overall, I would have liked to see the event pushed further with a few simple details to tie it all together. I skipped out on the movie, as there was no real lounge before my midnight showing. I was happy to see Asterix wandering around and couldn’t help but imagine a world of creative characters (not necessarily the theme park variety) wandering around – especially to keep us entertained in a highly inefficient diner system that involved not one but two lines. There weren’t even Fiats as photo opps when you first entered. In a world of sharing + visuals online, it took us awhile to find something photogenic in this amazing space. It’s still an interesting experience and more special events + showings are happening while it’s on through June 21st, but if you’re deciding between events, I’d pop over to the side entrance and visit DYNAMO instead. 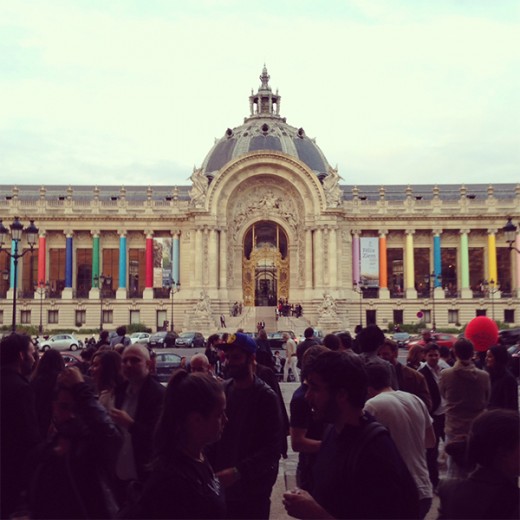 Now I’m curious about the Canson dressing up of the Petit Palais across the street. One thing is for sure, there is no lack of things to do in this city!