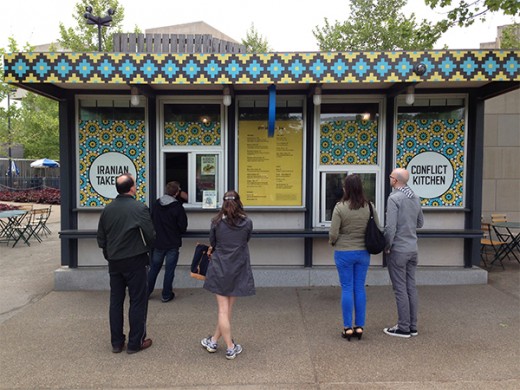 Several years ago I posted about Conflict Kitchen, which I learned about from Meena Kadri (she also wrote a piece for Design Observer). The concept is a take away stand that changes from time to time, featuring the foods of places that the U.S. is in conflict with. Along with the food, the design changes too. Conflict Kitchen is a project by Jon Rubin and Dawn Weleski, artists associated with Carnegie Mellon’s School of Art. When I booked my ticket to Pittsburgh back in May it didn’t even cross my mind that I could actually visit in person, so I was so excited when Felice had reminded me that it was there. In fact, they recently moved from their initial East Liberty location, to close to the University of Pittsburgh’s Cathedral of Learning, which was extra incentive to check it out. 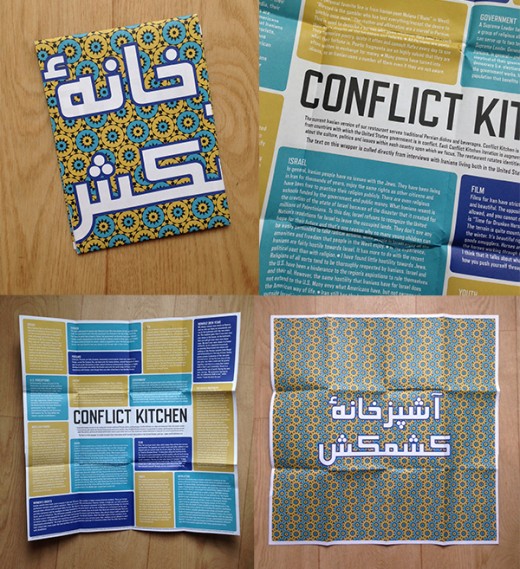 When I was in town the country in conflict/conversation was Iran, and we ordered a few different items – including a vegetable stew, rice pudding and sweet tea –to get a taste of things. It was all very good! Along with our meal came a folded up guide – used as a wrapper, depending on what you order – to discuss various themes and points of conflict in Iran, based on interviews with Iranians living in both the U.S. and Iran. It’s full of interesting tidbits too. For instance, did you know that the opposite sex can not touch each other in Iranian films? Also, violence in films isn’t allowed. Wow, what a stark contrast to what we see in American cinema! The conversation continues on the Conflict Kitchen blog as well.

The project funded through food sales, as well as support from The Sprout Fund and The Studio for Creative Inquiry. Culinary direction is by Robert Sayre, and the graphic design is by Brett Yasko (see a few more renditions from a page in a local magazine below). I love all the color and patterns! They recently relaunched their website too. 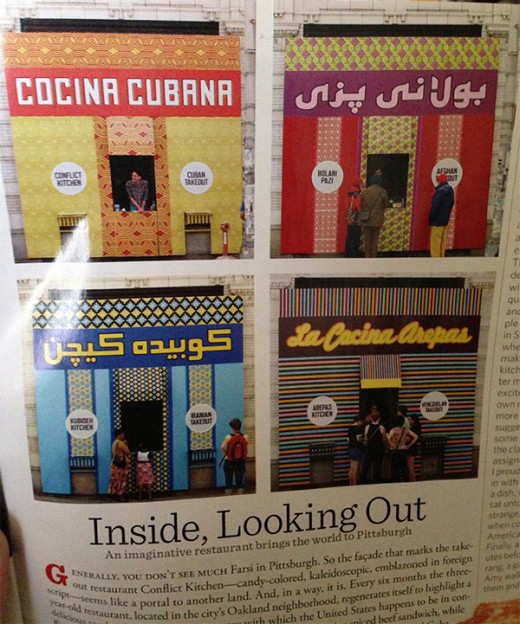 In my mind the only thing missing in the design are maps. I’m pretty sure in addition to not understanding the root of conflict, most people wouldn’t be able to locate these places we’re in conflict with on a map! (Yes, I’m still teaching my map making class on Skillshare if anyone is up for the challenge of mapping conflict!) 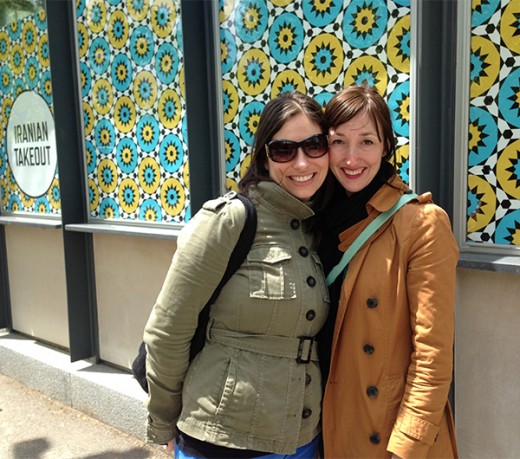 Conflict Kitchen is located in Pittsburgh’s Schenley Plaza at the corner of Schenley Drive and Roberto Clemente Drive. Open Daily from 11am-6pm.