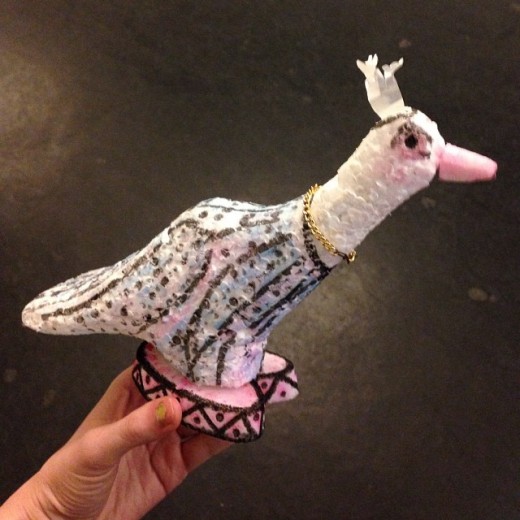 Today on my way to lunch I exited metro Bourse. The homeless man who is usually there was there as normal, but this time something new caught my eye. In the past I had noticed that he had created ash trays out of old soda cans (something I had seen done before), but today I noticed something new: animals created out of styrofoam. These were clearly made by hand, and these animals had personality. Particularly the bird who had a gold chain and metal hair. During lunch I mumbled to my friend Jenni “I think I may buy a styrofoam animal from the homeless guy at the metro on my way home.” She laughed, but when I get an idea in my head, I usually make it happen. And when I do it within the hour, I’m serious. 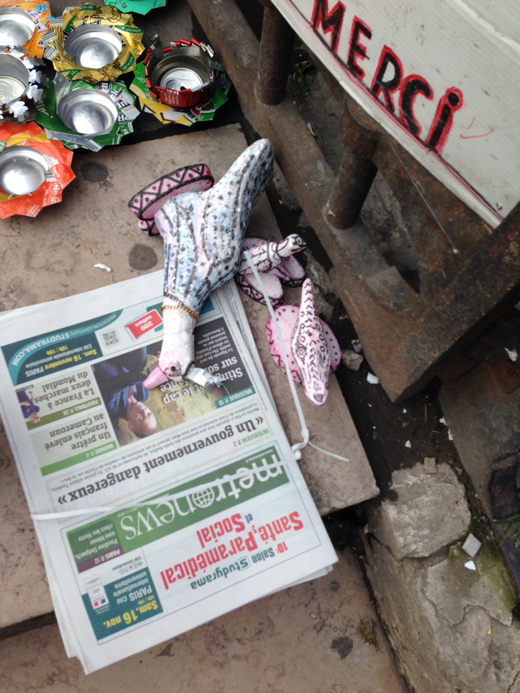 I think noticed the animals when I first existed the metro when I saw the homeless man with a big square of thick styrofoam. I initially assumed he was using it as a seat, but then made the visual connection to the small animals and bird on its side. The display was far from glamorous, and wasn’t front and center (nothing like these dinosaurs that made my day yesterday), but seeing him with the foam square made me make the connection. Later I noticed the small remnants of styrofoam around him.

Thankfully it was the same metro I take home so it was a no-brainer. I know I’m guilty of walking by homeless people without giving them a second thought, nor attracting unwanted attention (or guilt). But today I stopped. I told him in French I liked the animals. At the time I hadn’t even realized he was working on one, because I figured I’d give him a few Euros and our interaction would be done. Instead I got an insider look at his process. While myself and many of my creative colleagues turn to the internet for inspiration he had a pile of hard cover colorful childrens’ books, mainly the Disney variety. He flipped through them and showed me what he found interesting. We chatted in French, but I couldn’t always understand him (or not sure that he was always making sense), but I think my enthusiasm and interest and genuine smile on my face made up for any miscommunication. Then he showed me the end pages with animals, pointing out the skunk that he was currently working on. I’ve always loved watching artists work, and it was kind of amazing in his ability to translate a 2D drawing into 3D, while adding his own style to it. He tried to convince me that it was nice as is, but I assured him that I liked how he added marker detailing to the animals. 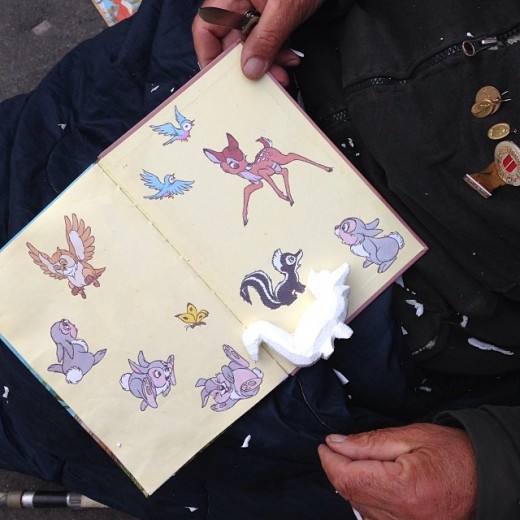 I still don’t know his full story, and have opted not to post his full picture on the blog. (I always feel weird posting pictures of strangers without their permission). I hadn’t noticed in person, but in the photos I saw that he had medals pinned to his jacket. It made me wonder if he was a veteran. I admit I got distracted by the bird which I was holding the entire time we talked. I realized after I left I didn’t ask him a price, but just paid him – probably not enough for the joy that happened afterwards, but I also know that I’ll be back and bring him a sandwich, or two. (I’m also happy to make a detour on my Vayable tours for anyone interested to support a local artist!) 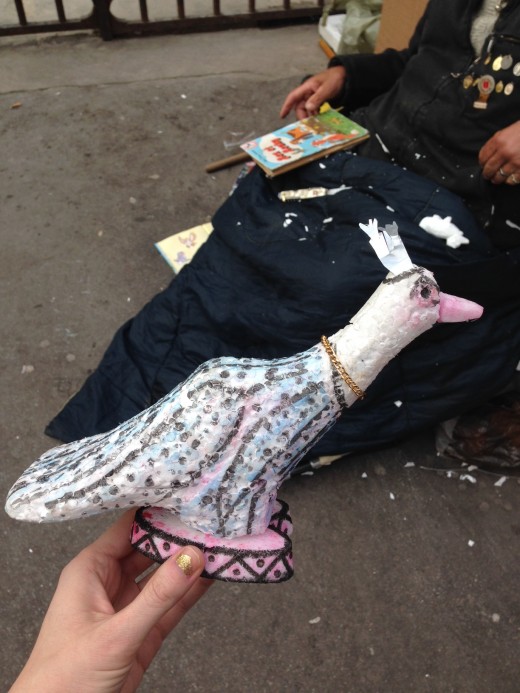 The next thing that happened was also something I didn’t expect. I was still smiling from the bird, and knowing that I was able to contribute to someone less fortunate than I, but when I descended down into the metro at Bourse (which ironically translates to “stock exchange”) I didn’t expect everyone else would treat me differently because of my bird. The French are a much more private culture than Americans, and you tend not to talk, smile, or interact with strangers in Paris like you would in the U.S. (3 hours after arriving in the states and I have more interactions with strangers than I do in a month in Paris). But when you’re holding an awesome bird made by a homeless man, people start to notice. The thing is, when I was holding it and the way I was holding it – like a proud mama – no one realized who the actual artist was. Before the train arrived I would tell the people who smiled as they looked at me that it was by the homeless man at the top of the stairs by the exit of the metro. Then I got on the metro, and a few more people started to interact with me (this NEVER happens). The sweetest was a grey-haired woman, who smiled at me and the bird several times and she heard me recount the tale a few times. As the new unofficial PR agent for the homeless man, I was happy to credit the maker (realizing that my vocab in French to described whittling birds out of styrofoam by a homeless man was a bit lacking). I also think that people – and it was a diverse group intrigued by my bird – didn’t really understand what I was saying because it’s not every day you see a bird like this coming from a man on the streets. I never would have guessed had I not seen it myself.

There is a certain je ne sais quoi in what this homeless man outside of the Bourse metro that embodies the entrepreneurial spirit that the world needs. He’s not only being resourceful with the simplest of materials, but he’s developed a style that is nothing like I’ve seen before. (There is too much “copy & paste” these days, and where I think long term financial stability falls short). Clearly this simple bird got me excited enough to blog a couple hours later, during  a time when I’m lucky if I get one post up a week these days. Sometimes I think we try way too hard when the secret to happiness and success is right in front of us! It all kind of reminds me of Caine’s Arcade, where a 9-year old with a bit of cardboard and a lot of imagination helped inspire kids of all ages.

To visit the talented styrofoam animal artist, look for him at the rue Notre-Dame des Victoires exit of the Bourse metro. Don’t just buy something from him, let him show you what he’s working on.

Creative Layovers: 9 Hours in DublinWorth the Wait: JR Inside Out