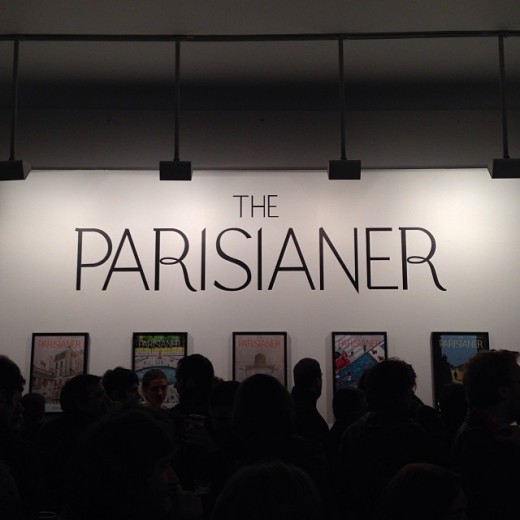 I often feel like Paris tries to be New York (hello, Brooklyn!) and New York like Paris, leaving me asking, can’t we just be happy where we are? The Parisianer is one of those cases though where Paris trying to be New York – The New Yorker to be specific – works. 100 illustrators were invited to share their version of Paris, inspired in part by New Yorker covers. The result is 100 different styles, levels of humor and insights into the Parisian mentality and what this city has to offer. The project initially started out as a Kiss Kiss Bank Bank crowd funding campaign by the internet illusive La Lettre P association. Not only did the campaign succeed, but The New Yorker picked up the gallery story yesterday. The works are being exhibited for the first time this weekend at la Galerie de la Cité International des Arts in the Marais (18 rue de l’Hôtel de Ville). All of the books sold out at Thursday’s opening, but posters, large scale calendars, and the actual prints (that haven’t been sold yet) are available as well.  They’ll be officially releasing the book in March at bookstores (in France to start, I imagine), which is co-edited by Michel Lagarde, who has one of my favorite galleries/publishing houses celebrating illustration. I went to the opening on Thursday and loved the energy in the room, and such a great way to discover new illustrators. The expo is on all weekend, complete with live music in the evenings. Double check the official website for opening hours. You may even find the perfect holiday gift there! 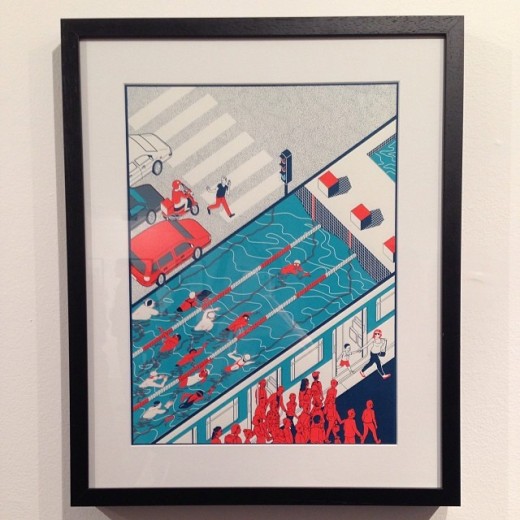 It was hard to choose a favorite, but Lou Rihn’s “Congestion” pretty much feels like my life here – walk, swim, metro. That swimmer crossing the lane happens all the time! Some of my other favorites are in the Vine below!

The artistic direction for The Parisianer is thanks to Aurélie Pollet and Michael Prigent, and the rest of the La Lettre P collective. Their first endeavor together was POING.