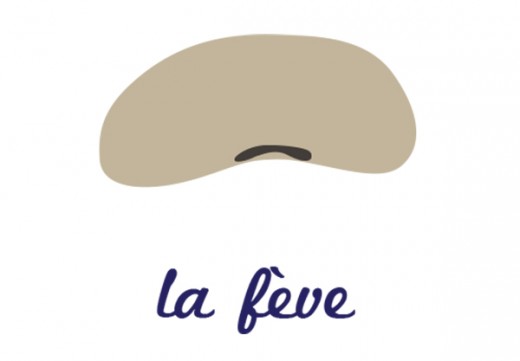 In case you missed the decree, not once, but twice yesterday I was declared Queen for the year during our annual galette des rois (king’s cake) celebration for Epiphanie (Epiphany). Eating one cake is never enough, as it’s always more fun to taste test.

Once you have your cake, traditionally, the youngest person has to go under the table and point to shoes to decide who each slice will go to. As our youngest last night was a new arrival from the U.S. we had her turn her back to the table instead. That’s when the magic happened. She picked my name to receive the last slice for the first cake. Even the server didn’t know who received la fève (lucky charm, that literally translates as “bean”). Then I saw something white in my slice. I was a bit disappointed at first only seeing a white ceramic square and thinking perhaps a piece of the mixer had broken. Alas, after a bit of archaeological digging, I uncovered the cute slice of galette on the other side. Not only did I get la fève, but I also became la reine (the Queen).

So then we were ready to try the second cake – a nutella/speculoos variety. As I had been the last pick for the first cake, the youngest this time figured it’d be funny to give me the first slice this time, which was quite hilarious as the server and I immediately saw a bit of blue in my slice and started cracking up. What luck! I now became the Queen for the second time over. 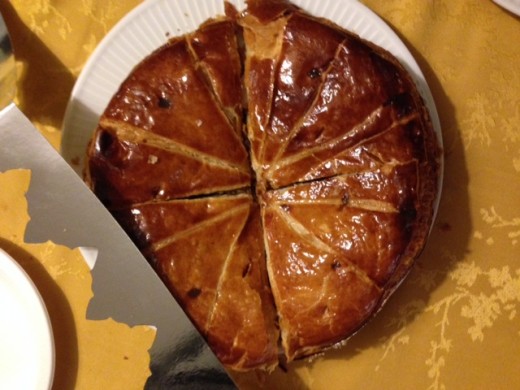 Galette des rois is something that you’ll typically find in French boulangeries in late December and early January. In France, most boulangeries – or the frozen food store Picard, who tends to have the most adorable fève dolls – include a crown with each galette. So in addition to my two new fèves, I had two new crowns as well.

You can always make your own galette des rois as well – David Lebovitz shares the recipe on his blog, and Clothilde Dusoulier has one too (and gets into more of the history). And check out these awesome fèves that Le Petit Atelier de Paris designed for Poilaîne this year. Even if I wasn’t Queen, I’d still think this holiday – an excuse to eat cake – was great. 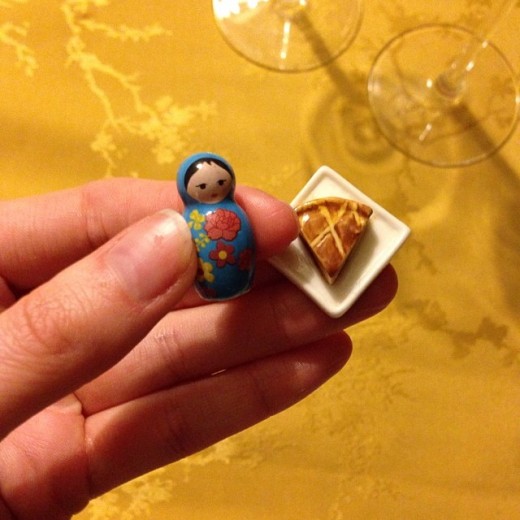 Proof that I am Queen! These fèves are far more exciting than finding a bean in your cake!