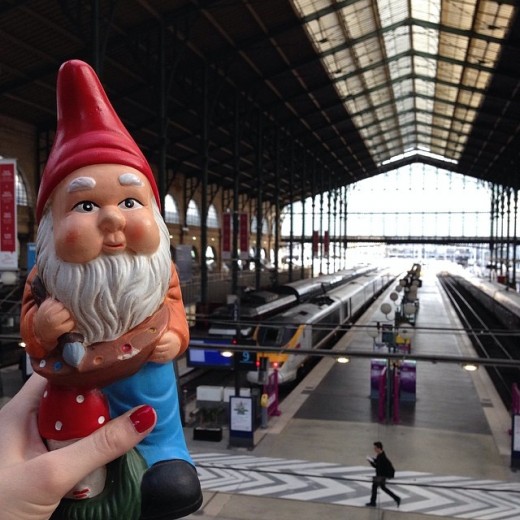 Most of the time when we travel the goal is to get from point A to point B in the fastest time possible. Being on the train is nothing like being stuck in traffic, but when we arrive at the station, I’m never quite ready to get off. I often find myself wishing the ride was longer so I could get more work done (or another nap in). The Eurostar trip between Paris and London is something like 2 hours and 20 minutes, and only 20 minutes of the time are in the dark (when you’re going under the channel) – the rest of it is beautiful countryside.  And to think, some people actually do this as their daily commute! On May 9th my gnome and I traveled from Paris to London for Blogtacular (yes, he was part of my talk). I felt very much like Amélie in Gare du Nord for our Paris photo opp. 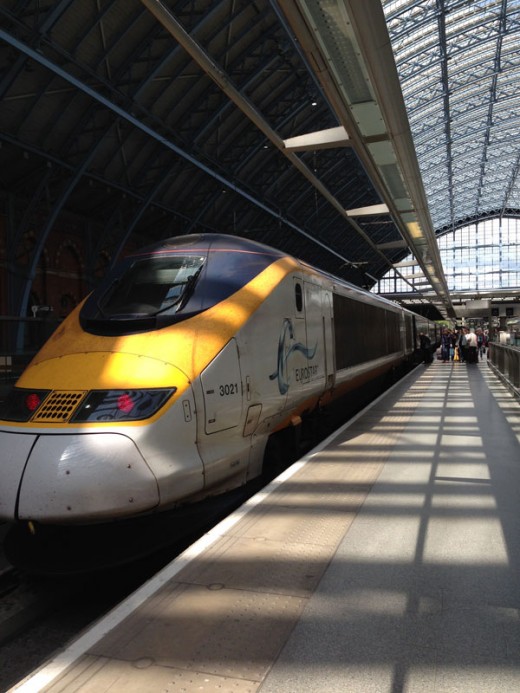 The other great thing about the train is you don’t have to wake up crazy early like you do to get to the airport 2 hours before a flight. You do have to leave enough time to go through customs and security, but shoes and jackets can stay on, and laptops are fine in bags, so it’s much faster. Eurostar says to check in 30 minutes before departure, but I always get there early because I like train stations. Eurostar trains board from a separate platform than the mainline trains, so you have to wait for the announcement to board once you go through all the check points. [Note: returning to Paris on a Sunday afternoon, give yourself a lot of extra time. Trains from London go a lot of other places, and I barely caught my train because the lines were so long to get through security and customs.] 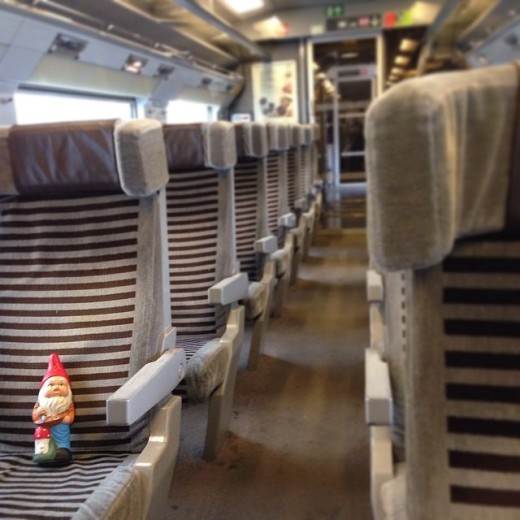 On the way to London my gnome and I managed to be the first on board – at least on our car – so took advantage of the photo opp. Funny, I have a brown and grey striped shirt like the chairs, which I’ll have to wear as a joke next trip! 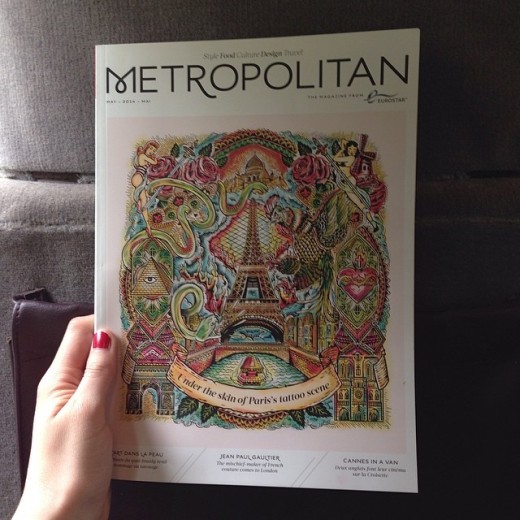 My other favorite thing about the train is that I love the Eurostar magazine, Metropolitan. You may be surprised to know that none of my favorite travel magazines are available on newsstands. I really love all the publications under Ink Global (who is behind Metropolitan, easyJet Traveller and many more). I thought the May issue was particularly striking because they commissioned a illustrator Megamunden – author of The Tattoo Colouring Book – for the cover to celebrate the new tattoo exhibit at the Quai Branly museum in Paris. You can read the full issue online. 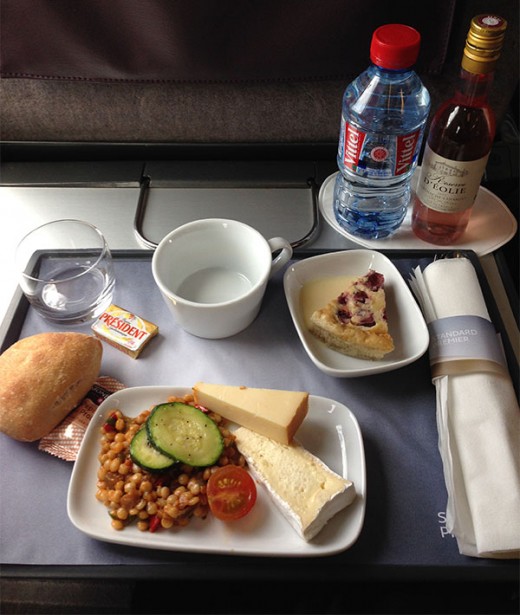 The funny thing was on the return trip I found myself waiting in a line. One of the Eurostar attendants checked my name off a list before I got onboard. I passed a rack of great magazines, sat down and noticed I had a seat completely to myself, and I saw an outlet (which I hadn’t on the way over). By golly, I was so busy planning the rest of my trip, I didn’t even realize that Eurostar had bumped me up to Standard Premier class for my return trip! Not long after we were on our way, they came by with a tray with two light food options (I went with the cheese plate even though I had stuffed my face with a M&S sandwich in the waiting terminal). And it came with my choice of wine. It was a Monday afternoon at this point, and wow, did this hit the spot. I definitely could get used to this (the waiting room looks nice too, and after interviewing the Creative Director of Eurostar for Fast Co. Design, it sounds like more is in store). 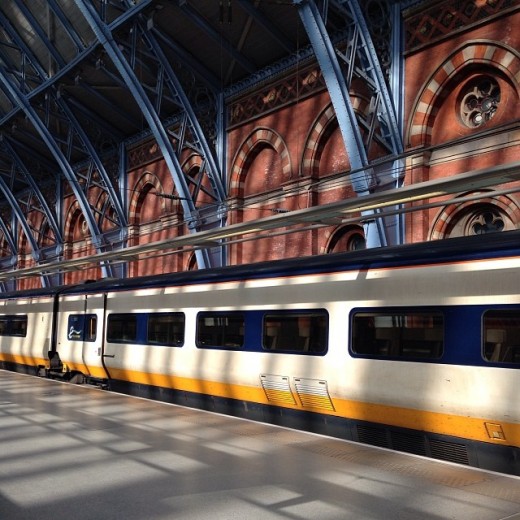 When I posted some pictures on Instagram, it was interesting to see a comment that the train seemed dreamy, but way out of their budget. Au contraire! While Eurostar was kind enough to give me this ticket, my last two tickets have been 69€ round-trip. My secret is to sign up for their newsletters and follow Eurostar on Facebook and Twitter (FYI, their Twitter account is great with customer service and is how you find out if your train is having delays). One thing I’ve discovered the hard way in Europe is that trains tend to only go up in price the closer you get to a trip, so I highly recommend booking in advance if you can. Also, flexible travel times will help you get better deals. 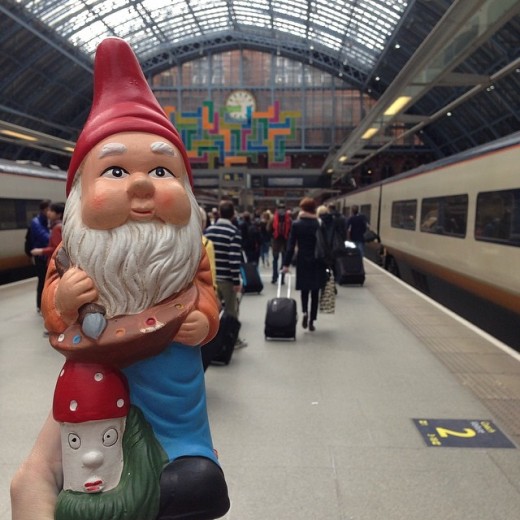 Gnome in London St. Pancras station. Once you arrive, it’s easy to get anywhere in London from the Kings Cross / St. Pancras Tube station, which is much closer and cheaper than trying to get into the city from the airport. Note too, that you can count on free wi-fi in the station. :)

Standard Premier
With the option of flexible fares, Standard Premier offers the freedom to work, think, or simply unwind. You will be presented with calm, spacious surroundings with on-board staff offering a light meal and a selection of magazines. Standard Premier fares start from £189 return.

Thanks for the ticket, Eurostar!