Everything I Ate in Puglia 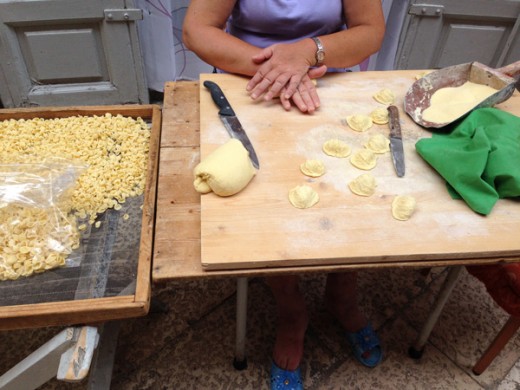 Earlier this summer I headed to Puglia, Italy for 4 days as part of the #WeAreInPuglia campaign. I learned so much about the region (the heel of the boot of Italy), but only saw a fraction of what there is to do. Food is such a key aspect of travel anywhere, but in Italy especially. Italian hospitality is incredible and I ate VERY well this trip. What I loved most about what I was eating in Puglia is that the dishes that really made me go “wow” were all made of relatively simple, and often just a couple ingredients. I’ve had pasta, cheese and gelato many times in my life, but never have they been as good as they are in Italy! This post will just give you a taste of some of the local specialties.

On my 1st day in the old city of Bari my tour guide Sonia took me down a small street with older women making orecchiette pasta by hand. The pasta is actually really easy to make and consists of two ingredients: semolina flour and water. The rest is left to the magic of the hands, and a simple knife. (See video above). The pasta can be made into different sizes easily, but a different sized knife is used to achieve this. 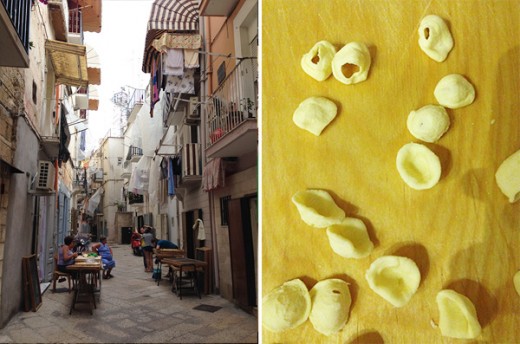 The shot on the left is the street in old Bari where the pasta makers were at work outside their homes. Later, I was able to give it a go as well. I was not very fast and you can tell which ones were mine, as they all have holes in them! A new signature style? 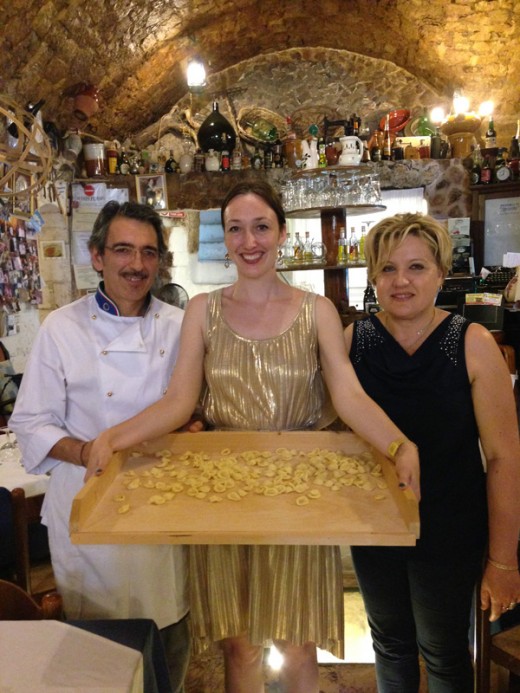 I visited Spessite Restaurant [official website] which was the first restaurant in historic Ostuni when it opened back in 1972 in a building where they used to make olive oil. This also happened to be the first place I got to try making orecchiette myself, and eat orecchiette as well thanks to Chef Stefan and his lovely wife. If you’re walking up narrow hillside stairs you’re headed in the right direction: Via Brancasi, 43, 72017 Ostuni. 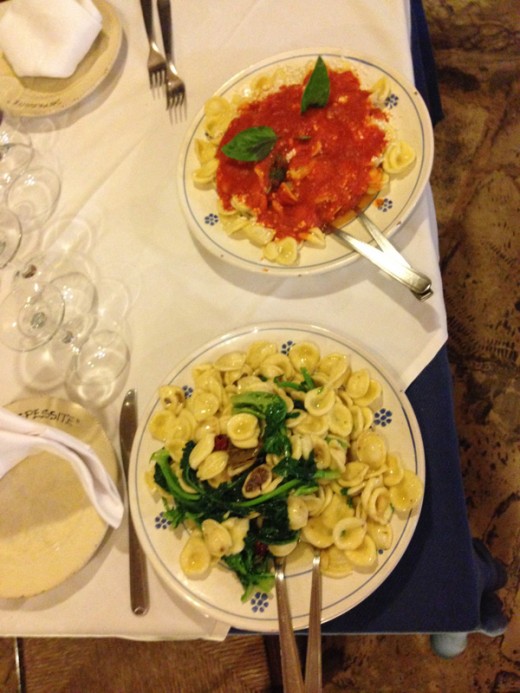 The dish was prepared in two different ways: tomato, basil and ricotta, and turnip flower, anchovy, and pepper. Both were delicious! 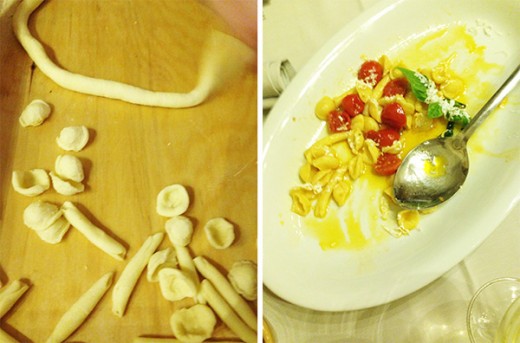 At Gaonas Restaurant in Martina Franca, I learned that by using a simple metal rod, the pasta dough could be made into a longer tube shape. There they served it with a more oil based sauce, and fresh tomatoes. Also delicious! Gaonas is located at Bia Arco Valente, 17, 74015 Martina Franca. 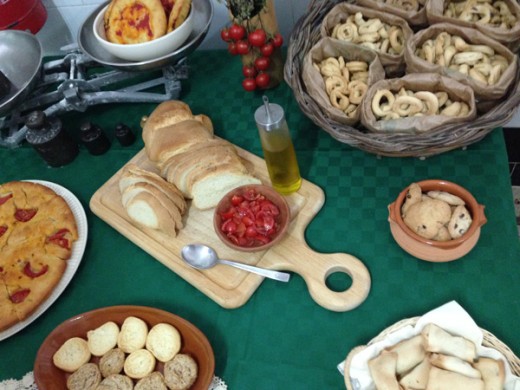 Baked goods in Italy are very different than those in France.  While French pastries tend to be flakey, I really enjoyed that Italian pastries were the perfect snack because they didn’t leave as many crumbs! I also never realized that foccacia was made with potatoes! 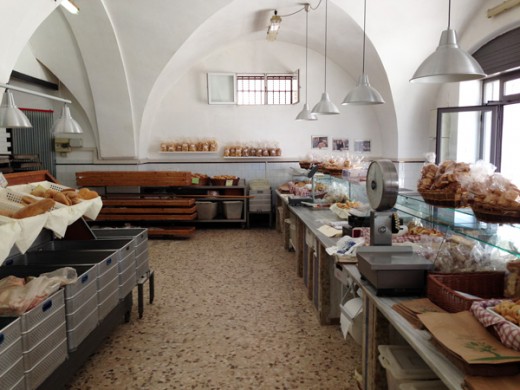 How amazing is this bakery – Sant’Antonio Bakery – that has been family run since the 1960s! I hope it never changes (although their daughter isn’t looking to continue in the family’s footsteps, I’m trying to convince her she must!). 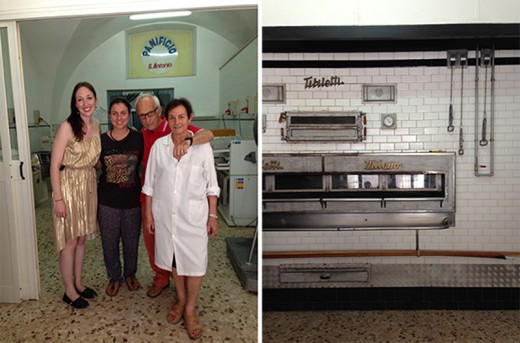 I loved that many of the machines they’ve clearly had for years – rather than working with the newest technology – but have very specific purposes for what they’re making. It also happens to be far more interesting than new machinery to photograph (and better typography for sure!). Timeless, yet functional. This is me with the husband and wife (she runs the front of the shop) and their daughter Stefania. I thought they were so wonderful! 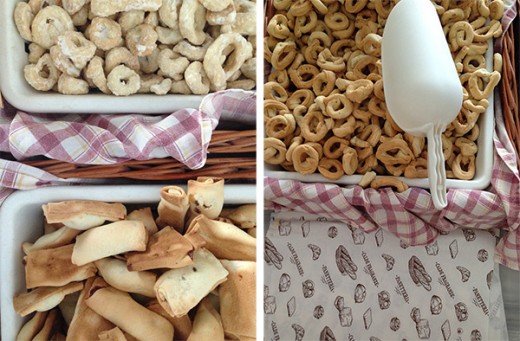 They kindly sent me home with loads of treats which were even better than I remembered. My favorite were the tortellini looking ‘tarallini’! Panificio S.Antonio Bakery is located at 21, Via Diaz Armando 72017 Ostuni. 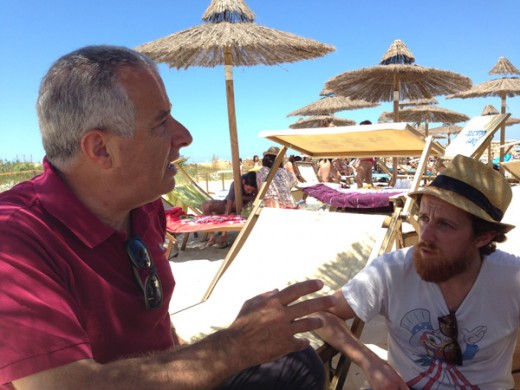 At Torre Guaceto I got to meet with Marcello Longo [left], who brought Slow Food Italy to Puglia (read about the Slow Food movement in English). Thankfully I had my host Carlo there to help translate, because his story was fascinating. Torre Guaceto is a nature reserve aimed ad biodiversity and sustainability in tourism and daily life, so this was the perfect – and most picturesque – place to meet. 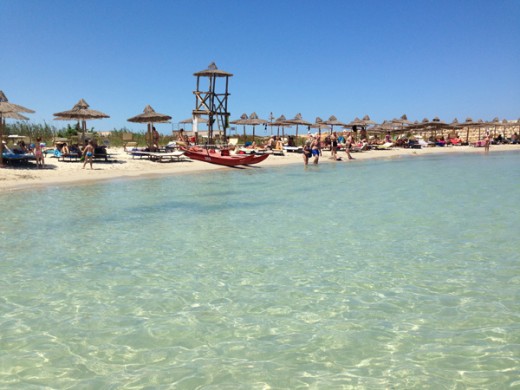 A key goal is to keep the environment as it was intended and return it to its origin, and one of the ways to do this is through organic farming. Longo is a true ambassador and his passion and patience in his storytelling came through as he told us how back in 2005 he worked to convince local farmers that despite being a more expensive practice, organic farming would be worth the investment. There were three very difficult years and the farmers were very reluctant, but with time gained their trust and investments. 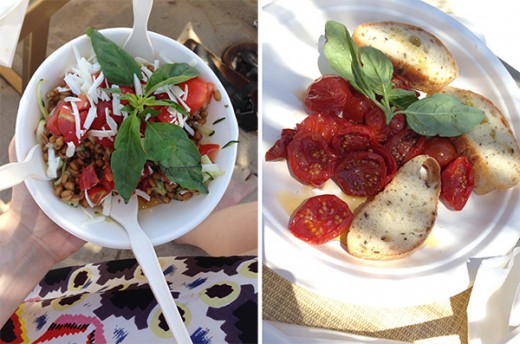 The project started by looking at organic farming with oil; there are olive trees for miles in the region (one for each person in Italy!). Then the farmers expanded to different products, namely tomatoes. He described the ones on the right as a sweet tomato, more like eating chocolate than a fruit. They were amazing! The grains in the salad were so fresh. The cheese is also part of these endeavors to farm more sustainably. 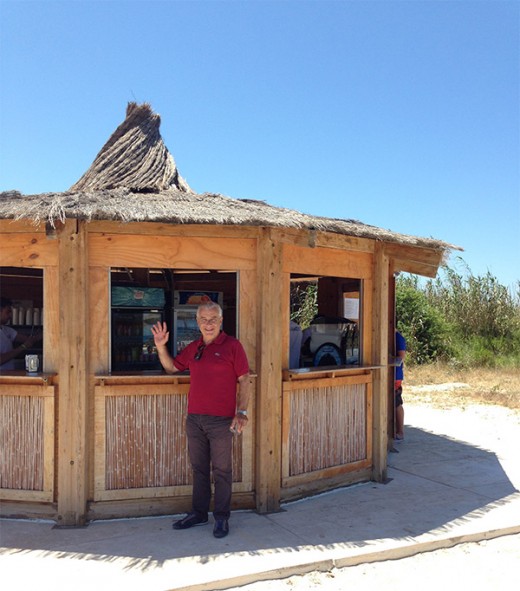 And the amazing thing is that all this healthy, organic food is sold at the snack hut on the beach! You definitely don’t see that everyday! Even the cups are biodegradable, in case they accidentally don’t end up in the trash.

These icey frappicino-esque drinks appeared for us when we were at the Torre Guaceto beach. Also amazing and refreshing! 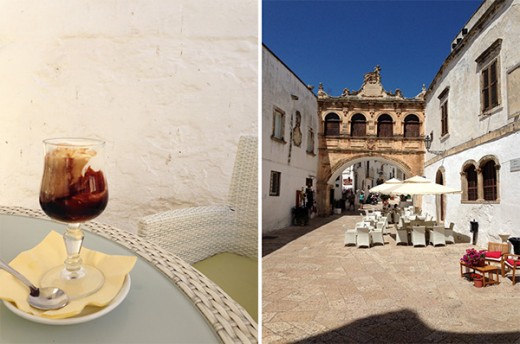 Coffee break! I don’t even like/drink coffee, but I absolutely adored this espressino fredo, a summer specialty with ice cream and chocolate. Once it arrived on the table in front of my Italian hosts, I knew I must try one too! Even better was we had it under these giant umbrellas facing the old cathedral [not pictured, photo is taken from the steps] in historic Ostuni. I think if I lived in Italy, I’d drink a lot more coffee! They make it right here. 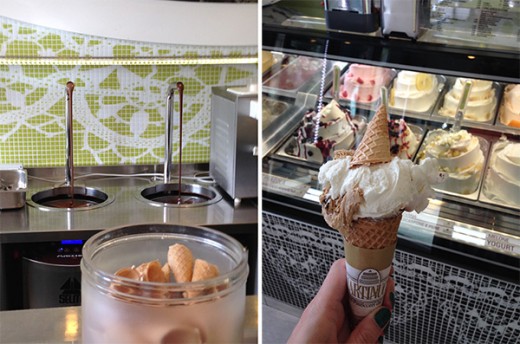 When I was on my tour of old Bari with my guide I got hungry after I saw two teenagers eating ice cream in a square. She suggested we go around the corner to a different place. Having a local is priceless, as this gets filed under most amazing gelato of my life. Also, note that each cone gets a quick dive under the chocolate fountain to encase the inside with a thin layer of chocolate. The gelato in this photo is the smallest ‘piccolo’ size, for a whopping 2€! So good. Don’t miss Martinucci (est 1950) at Piazza Mercantile, 81 70121, Bari. 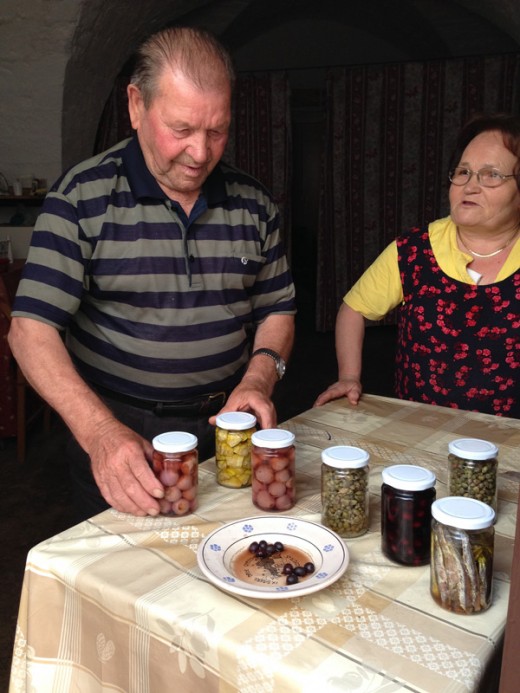 Almost every meal I ate in Puglia started with appetizers that included marinated vegetables such as eggplant, artichoke or peppers. This couple who we happened by in this historic city of Ostuni seemed to have their own business canning olives, capers and more. 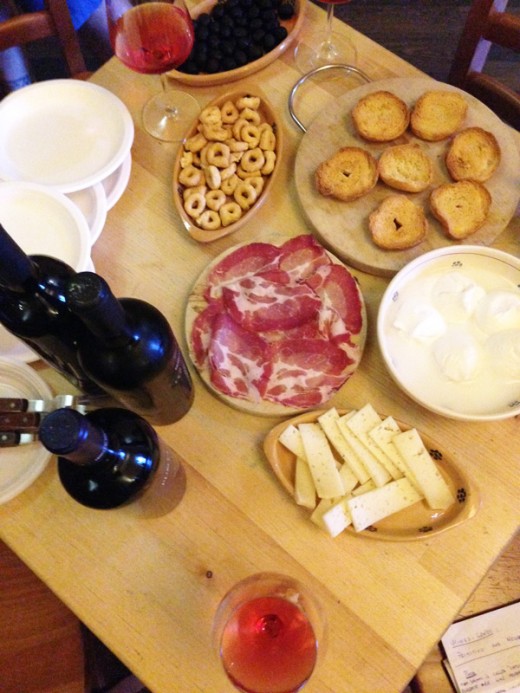 One of joys of seeing how – and where – your food is made, it makes it even more fun to eat. Enoteca Divino wine bar hosted us for a lovely apéro (sorry, that’s French!) of rosé. I really enjoyed all the Italian wines I tasted. Here I learned that you’re supposed to dip those really dry, bagel looking breads in a bowl of water before adding the tomato/basil topping (unless you want a really dry bite; the catch is you can’t prepare it in advance or it will become soggy). I also truly fell in love with both mozarella and burrata cheese, especially when they’re soft inside! Located at Via Gaetano Tanzarella Vitale 35 Sig Vito, Ostuni. 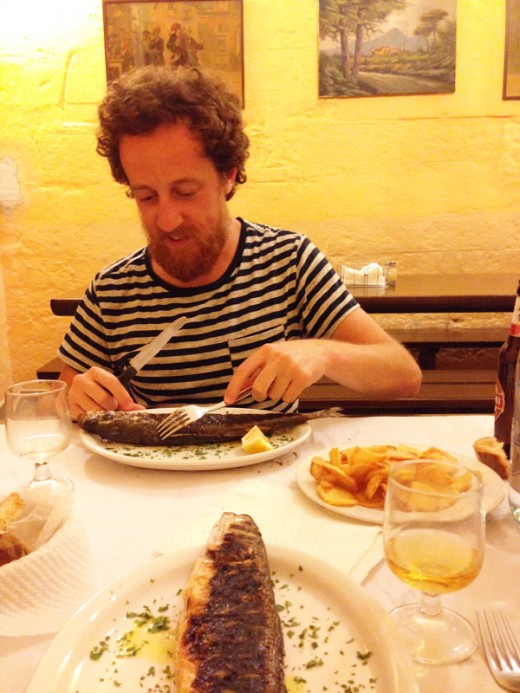 My first dinner in Puglia was with my host Carlo at Osteri Le Travi in Bari. I probably would have been set after the appetizers, which are served buffet style and you serve yourself. Then came the pasta course. Then came the fish! I thought I was going to explode, but thankfully watermelon was for dessert which seemed to lighten things up. Word of warning when it comes to food in Italy: pace yourself! :) Located at Largo Ignazio, Chiurlia, 12, Bari. 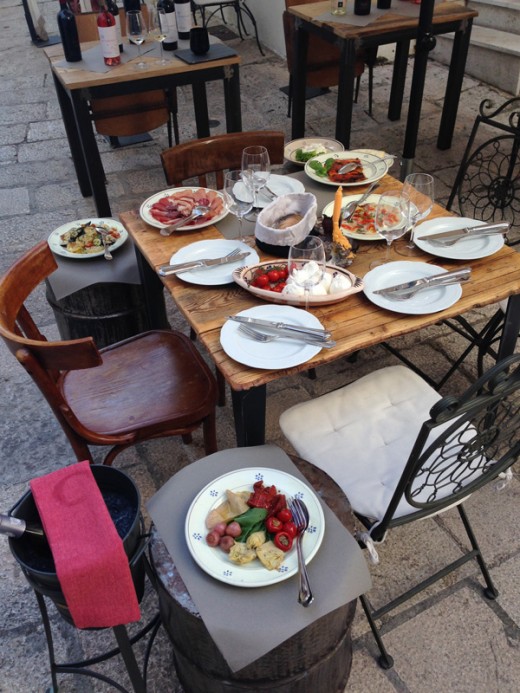 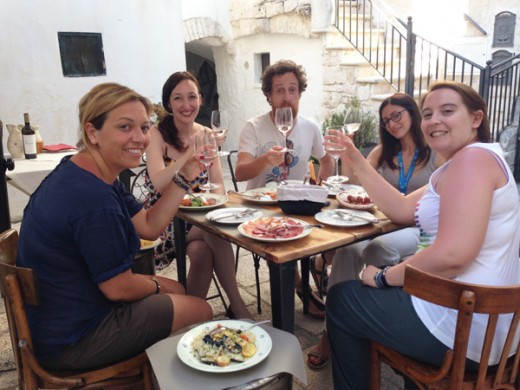 Thankfully I had lovely new friends so I didn’t have to eat it all myself! 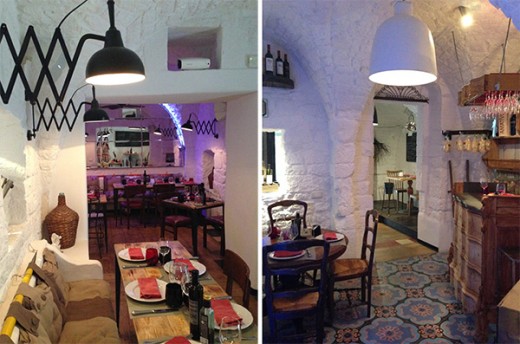 We ate outside, but really I loved the inside of Mezzofanti! It had a cool vibe, even with the employees, and just my style. There were a bunch of rooms and it extended out into the back terrace. I didn’t get to stay long in Cisternino – known for its meat shops – but would love to explore more. Mezzofanti is located at Piazza Pellegrino Rossi 20, Cisternino. 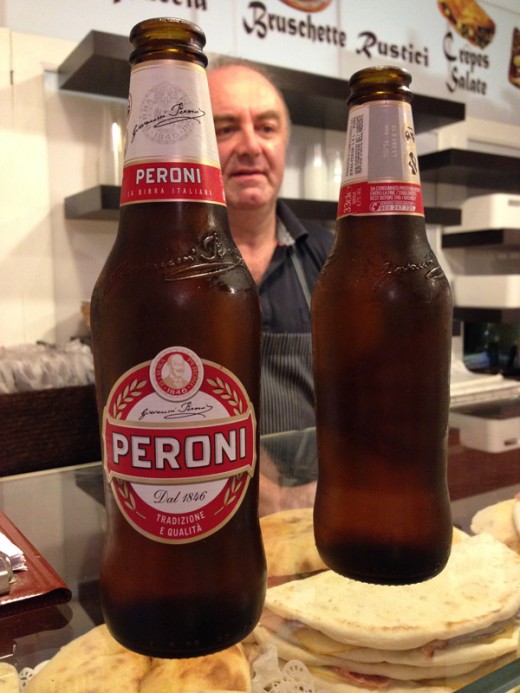 By 7pm we arrived in Polignano a Mare and determined it was beer-o-clock, and picked up these two Peroni beers at a little “sandwhich” shop. Living in Paris where it’s nearly impossible to find a beer for less than 5€, I was amazed together these two beers only cost 3€! See, travel can save you money! Even better was taking the beers and hanging out in the plaza and watching the crowd outside an open air restaurant cheering on a World Cup game.

In Puglia you can easily assume a restaurant is not popular because it is empty, but the reality is everyone eats late (they siesta between 1pm-3/4pm). By the time we finally sat down to eat on my last night it was closer to 9pm, and not long after the terrace seating was completely packed! After all my amazing eats, I had to opt for a margarita pizza as my last meal to “spice” things up a bit. Cuccundeo is at Piazza Aldo Moro, 14, 70044 Polignano a Mare. (Some famous show/movie was filmed on this square, but it’s slipping my mind now). 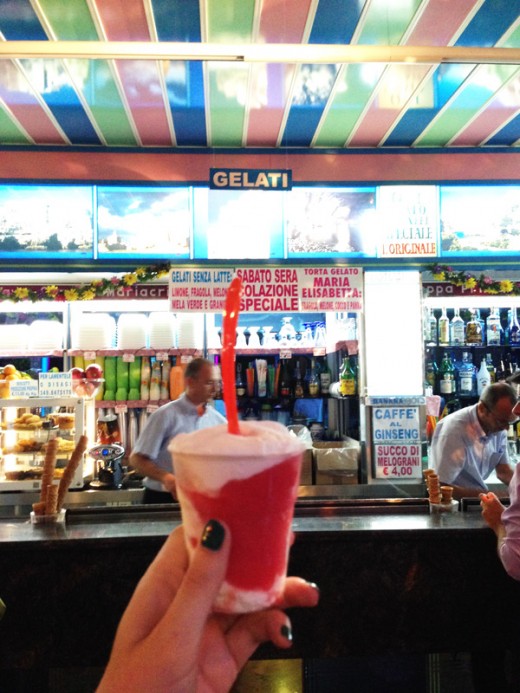 But even when you are stuffed in Italy, it’s really important to make room to try new things. My life would be incomplete had I not tried this watermelon and cream granita that completely rocked my world. Mario Campanella Il Super Mago del Gelo (since 1935) was a completely awesome place that felt like the blast from the past in a different culture. The long lines of people waiting for gelato and granitas made me believe this is the place to go in Poliagno a Mare: Piazza Guiseppe Garibaldi, 22. 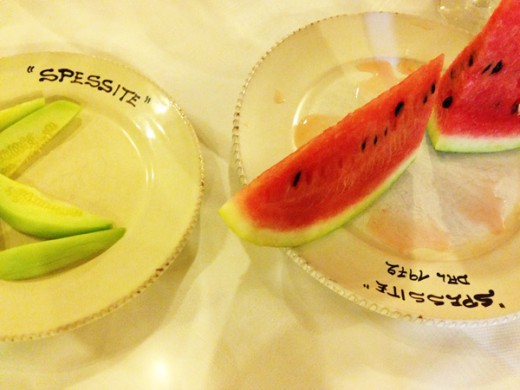 Watermelon was clearly a theme of this trip. Interestingly enough, always in dessert form. 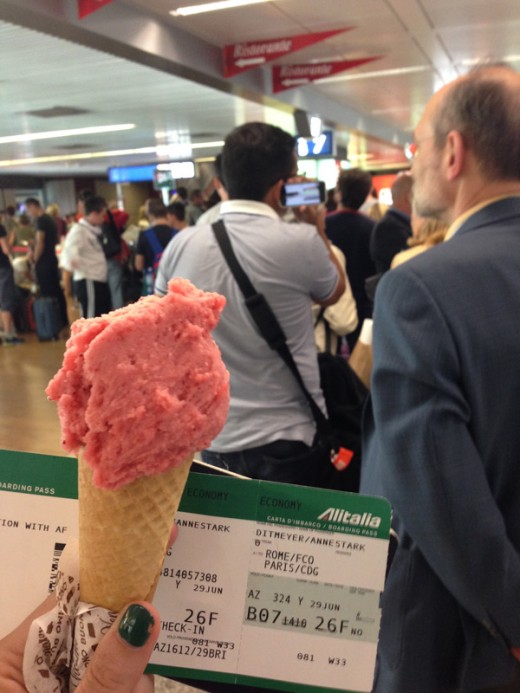 Being stuffed didn’t stop me from getting one last gelato, conveniently located between gates during my short connection! Gelato is good, but gelato in Italy is even better!

This is just a taste of Puglia, but follow the hashtag #WeAreInPuglia on social media to get a better idea of all there is to experience in this region. You can find the official Puglia channels: at WeAreInPuglia.it, mypugliaexperience.eu, viaggiareinpuglia.it, and by following @WeAreInPuglia on Twitter, @viaggiarepuglia on Instagram, and We Are in Puglia on Facebook. I’m very excited I got to be included on this trip thanks to iAmbassador! Stay tuned for my next post which will give you a better sense of the architecture.

A Mini Guide to PugliaBloggers Guide to France