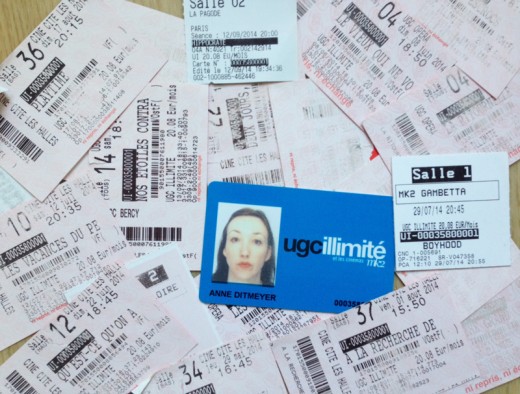 When was the last time you saw a movie in a theater? I’ve been 3 times in the past 4 days. Typically I don’t go quite that often, but I needed to make up for the 3 weeks when I was too busy to use it. In my mind the cinema pass is one of the best French inventions ever. For 20€ / month I can see as many movies as I want in the theater. I have the UGC/MK2 illimité, which gives me access to all of their cinemas around town – and there are a lot: over 500 in France – as well as La Pagode (a cinema in an old pagoda) and Luxor (an Egyptian cinema). For UGC theaters I can book through the app, and pick up my ticket an hour before the show, or for MK2 I just show up. I’ve started using the pass an excuse to see different parts of Paris by visiting different cinemas. Another perk is when I see a bad movie, it’s not much of a loss, and I still got a language lesson out of it! While I may look somewhat miserable on my cinema card, fret not, that’s just one of my non-smiling official French passport sized photos one needs to survive life here. One of my favorite past-times is just strolling up to a theater and seeing whatever the next show is that is playing. Not only does my French get better the more movies I see, but having French subtitles on American films is also a learning experience (VO = version originale). I also become an unofficial PR agent for the films I see, and several of my friends have the pass as well, so the cinema becomes our inexpensive social outing. Here are some of my favorite films I’ve seen in the past couple month (I try to go once a week).

Les Vacances du Petit Nicolas is a fun summer vacation story based on the French book by Goscinny and illustrated by Sempé.

Qu’est ce qu’on a fait au bon dieu? is a hilarious French movie about devout parents whose only wish in life is to have their 4 daughters marry good Catholic men. With daught #4 they get closer… I think the film would be funny to anyone, but living in France, I found so many of the stereotypes extra funny because I’ve observed moments in real life. The movie has been in theaters for 22 weeks so far, so it’s a hit!

Boyhood, directed by Richard Linklater, who was behind Before Sunrise, Before Sunset, and Before Midnight (each filmed 9 years apart), Boyhood is a coming of age story filmed with the same actors over 12 years. It’s almost 3 hours, but doesn’t feel that long. Also, I had no idea his daughter was the young girl in the film. I thought she was fantastic!

Searching for Vivian Maier is a documentary about a mysterious nanny who had a secret life as a photographer. Funny because an Irish said it was a “very American” telling of the story, which I can see.

Playtime by Jacques Tati is a film from 1967 that was digitally restored. It’s a quirky story of American tourists coming to Paris, but see more of a trade show than Paris.

Je Voyage Seule is an Italian movie (here with a French title) which is an interesting story about travel in the world of 5-star luxury.

The Fault in Our Stars is translated into French as Nos Étoiles Contraires (oddly enough, I often don’t know the actual titles of some films I see in France, as I only know the French title; other times American movies are given titles that are new “translations” that are still in English) is an American film based on the book by John Green. You won’t leave the theater with dry eyes, but it’s a touching story.

The Love Punch with Pierce Brosnan and Emma Thompson is only on this list because 3 summers ago I was an extra in the movie. I didn’t make the final cut, but it’s fascinating to see how much we filmed in 2 days and what actually made it into the movie.

One of my other favorite things about seeing movies in Paris is watching films that have scenes in Paris. I find I can recognize most locations, but this map compiled by Rue 89 has over 600 locations of films in Paris.