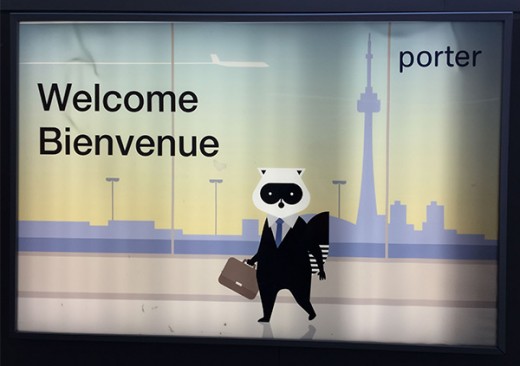 Porter Airlines, what air travel used to be! Back in 2009 Grace of Design*Sponge posted this interview about the branding of Porter Airlines. Ever since the day I read that post I’ve been aspiring to fly Porter. The catch is that they’re a Toronto based airline and I don’t have the excuse to go to Canada much. So when the opportunity came up for me to attend the RGD Design Thinkers conference (awesome, BTW!) and see family, I jumped on the chance to fly Porter (who also happened to be a sponsor for the conference, not for this post, which is entirely my own love affair with the airline). The irony was that I may have been able to find a cheaper flight, but I didn’t even bother to search my typical cross-checking websites. When it comes to good design, and a great experience, I don’t mind if it’s not the lowest fare (it was still reasonable!). Pretty much everyone I’ve talked to since my trip to Toronto has heard me rave about my experience on Porter so I thought I’d share it here. While nothing I’m about to say is all that novel, it’s amazing how much of a hassle air travel has become. Porter is what all air travel should be! He’s also a pretty rad raccoon who knows how to travel and have fun! 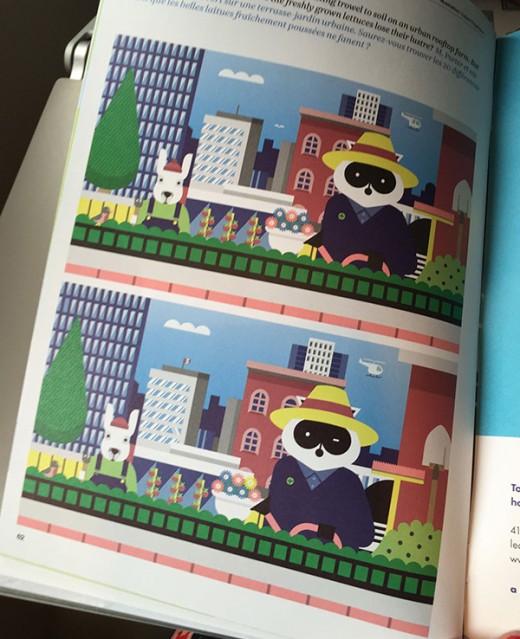 Step 1: Airport arrival. I have sadly been conditioned to always arrive at the airport 2 hours in advance, because often I get there and I’m standing in some horrible line despite having checked in online and end up rolling up to my gate not too long before my flight boards. Both flying out of Newark and Toronto there were only 2 people in front of me in security. It reminded me of how we used to just stroll up directly to the gate before security was implemented after 9-11. In short, it was easy and pleasant. 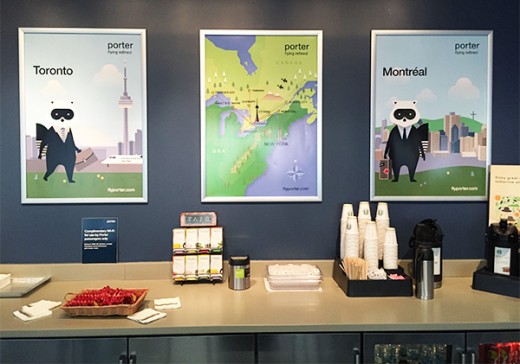 Step 2: Hang out in the lounge and enjoy free wi-fi. I must admit that I didn’t realize Porter even had a lounge, because these days I rarely see lounges, and you have to fly a million miles a year on the same airline (or have a hefty airline credit card!) to even be considered in. But then I heard a voice asking about sandwiches [not included in the lounge], and I look up and I’m like, ‘Hey that was Martin Short!’ (Think crazy wedding planner in ‘Father of the Bride’). Yes, he was on my flight, and I have him to thank for pulling me away from the horrible CNN election coverage on in the main waiting area. But yes, even celebrities fly Porter. In addition to the free wi-fi (my phone is French so I live for free wi-fi while I travel, and MrPortersLounge is the coolest network name!). I also enjoyed complimentary Tazo tea, with the options of Starbucks coffee, a range of sodas, bottled water, biscuits and almonds. It was a so civilized!

Step 3: Board the plane. Now if you fly Porter you need to realize these are prop planes (the wheels come out of the wings), and not 747 jumbo jets. There are luggage limitations, but they’re up front about them. I did carry-on, but it was super easy to gate check. I admit, it was a strange feeling to board the plane and find my seat and not feel like being in a herd of cattle! Pleasant.

Step 4: For awhile I’ve said that airline inflight magazines are my some of my favorite, and it’s the one time when you actually have time to read it cover to cover. I had my row to myself, but had anyone seen me pick up the Re:porter magazine for the first time, I think they would have thought something was wrong with me. It was so beautiful! Atypical paper size. Beautiful, thicker matte feel. Clean and simple design. Cute illustrations of Porter. And it was all in French and English (perk of Canada!). And how perfect is that name!?! As a bonus there were also multiple spreads with maps. My complimentary copy definitely came home with me! 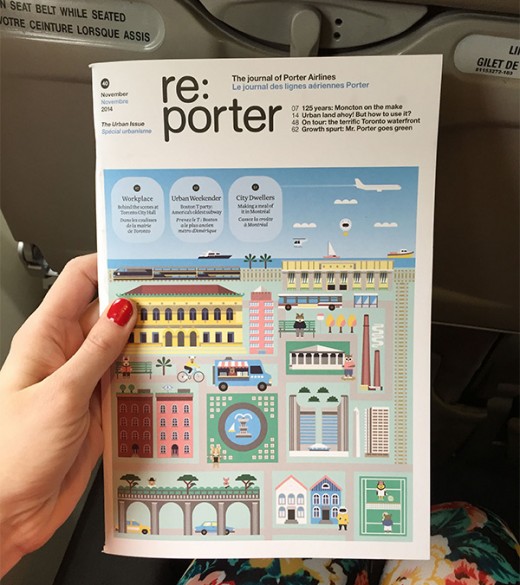 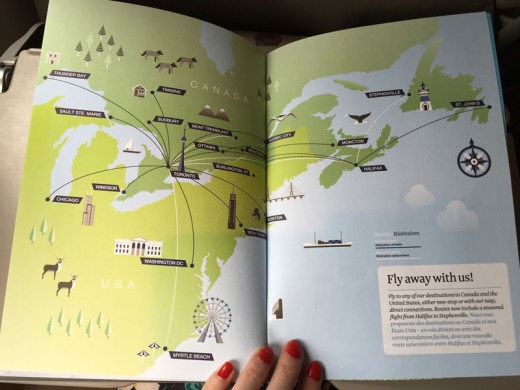 Step 5: Enjoy the ride. I’d heard from my relatives that Porter serves their beverages in glasses. Yes, glasses, with the name Porter etched in them. They’re so cute!! If you’ve ever flown international you know how cringeworthy it is how many tiny cups get tossed during that flight. Granted Newark to Toronto was something like an hour and a half flight, and a different kind of international, but still it is the simplest detail that becomes memorable. Oh, and they serve free beer and wine on their flights! WIN! (For the record, that’s ginger ale pictured below). 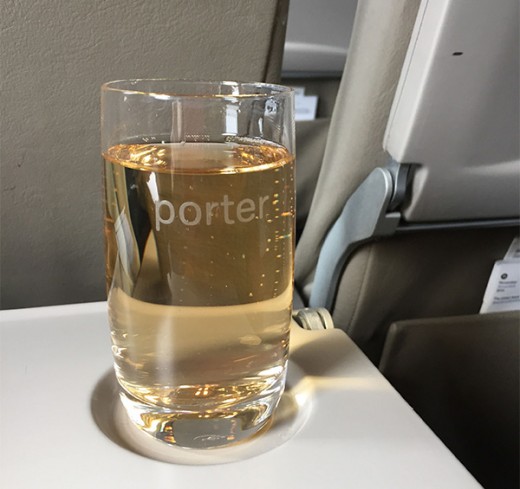 I am however sad to report that they no longer do the adorable Porter snack boxes. Yes, I specifically asked because I remembered the design from this post. Apparently, they stopped earlier this year. It makes sense, it’s an expense, and it’s a short flight. I was quite pleased with my snack of Terra chips to tide me over. And the flight attendants were a pure delight––not to mention stylishly dressed––in addition to answering silly questions about snack boxes. I was very happy to share with them my story of my first flight.

Step 6: Arrival. By the time I finished my inflight magazine we had landed. Getting through the airport was super easy (but a bit slower for me as I stopped to photograph every poster of Porter around, despite poor to photograph lightboxes. Porter goes to Chicago and Washington Dulles, ya know!).

Canadian customs was a bit intimidating, but I passed! (Don’t forget your passport. It may still be North America, but it’s a different country!). When you fly into Toronto, you land on an island, so everyone gets transported via the ferry that leaves every 15 minutes or so. Public transportation in Toronto is a whole other story, which I won’t rave about the same way I just did about Porter Airlines, but I ultimately got to where I needed to be with the help of the kindness of strangers : )

Learn more about the backstory of Porter on this Design*Sponge post. London-based Winkcreative is the agency behind Porter’s inception (see their take on Porter here). If Re:porter inflight magazine seems slightly familiar, Winkreative also works on Monocle. Neal Whittington who Grace interviewed and worked on the development of Porter while at Winkreative, but now runs his own fabulous paperwares shop in London – and online! – called Present & Correct (he also keeps an awesome Instagram feed!). I visit every time I’m in town! . . . And if you want to book a flight on Porter you can do it here!