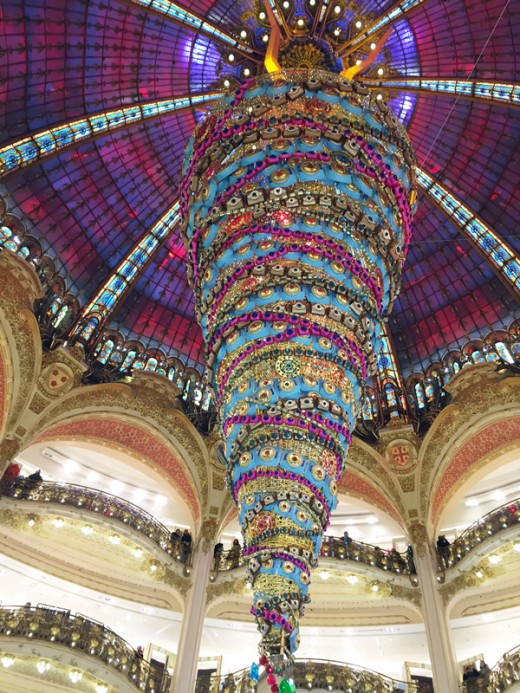 Although Christmas has come and gone, it will inevitably come again next year, so I wanted to compile some of my favorite links for future reference. And most of the decorations won’t come down until mid-January, so it’s not too late to catch the festive spirit. This year I stayed in town, and had several tours, so I really got in the spirit – or at least knew what was going on.

Every year the holiday windows at Galeries Lafayette and Printemps along Blvd Haussman in the 9th arrondissement are a huge draw, and every year the crowds get crazier and crazier. I either recommend going early in the day, or late in the evening after the stores are closed (the downside there is that you can’t visit the 6 story Christmas tree inside Galeries Lafayette — this year it was upside down! [opening image]). Ever year the windows have themes, and this year Galeries Lafayette was “Noël Monstre” and Printemps was a voyage with Burberry. I visited on several occasions, and almost got trampled each time. Visiting on Christmas Eve was the calmest time I experienced. If you’re traveling with kids, realize that the crowds can be very overwhelming, and try to avoid strollers and big bags. If you cross the street it is much calmer, but the catch is you can’t see the moving window displays up front.

Ice skating in front of Hotel de Ville (city hall for Paris) is another tradition, and for the second year the impressive Grand Palais off of the Champs-Elysées has become an ice rink (buy tickets online – every year it picks up momentum after Christmas and is super crowded the final days; late night is more of a club vibe). The later you get into the season expect longer lines. A couple years ago skating at Hôtel de Ville was a bit overwhelming with a few teenagers who had brought their skates (it’s free entry that way) and were pretty aggressive. This year it was much calmer when I passed. 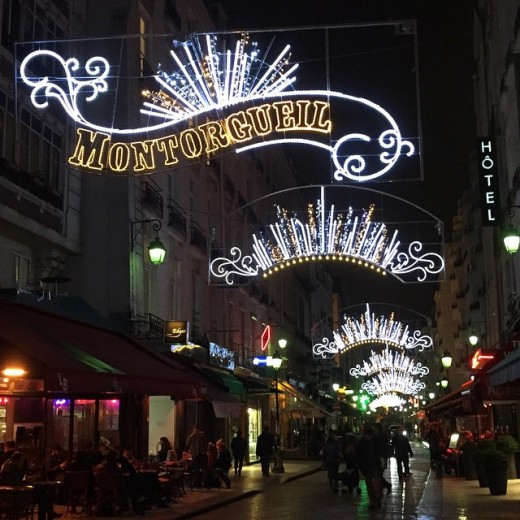 If you love to walk like I do, dozens of streets around the city are decorated with lights through ~20th of January. Some of my favorites are Place Vendôme (1st arr), Rue Cler (7th arr), Rue des Martyrs (9th), Rue Lepic (18th), and Rue Montorgueil (2nd). The city kindly put together a map marking all the illuminated streets for 2014, which doesn’t change much from year to year. The “grande roule” giant ferris wheel also gets set up at Place de Concorde (and the base of the cringe worthy Christmas markets along the Champs). 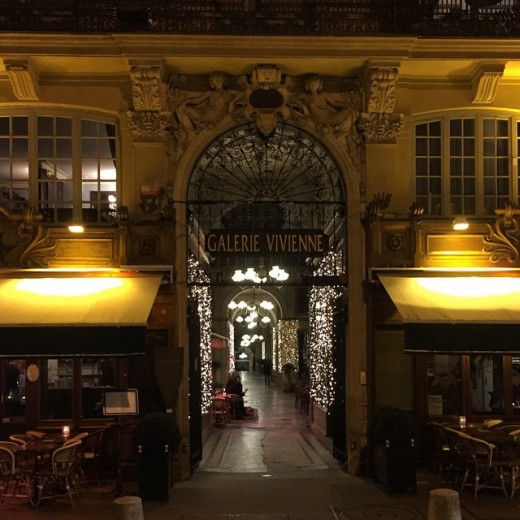 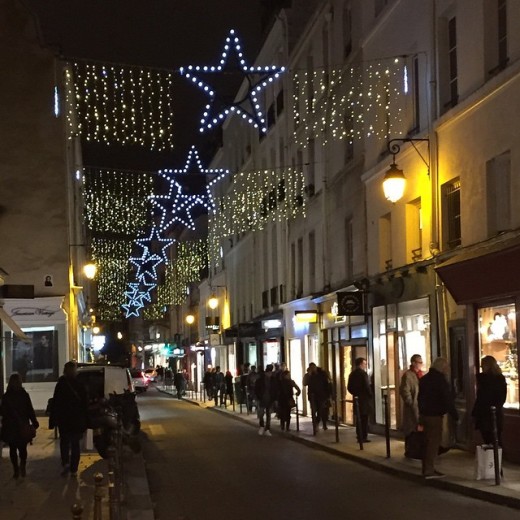 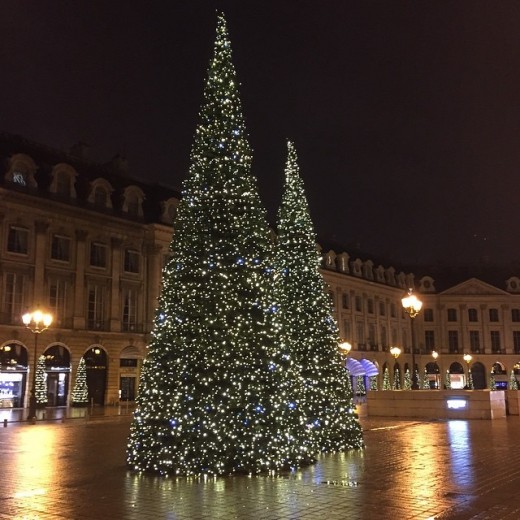 Christmas day most museums are closed, but the Centre Pompidou remains open. This year we were happy to visit right when it opened as it only got more crowded. It was very cool being able to get a bit of culture – Jeff Koons, Marcel Duchamp, and Frank Gehry exhibits are currently on. Even if you don’t like modern art, the views from the Pompidou are stunning! 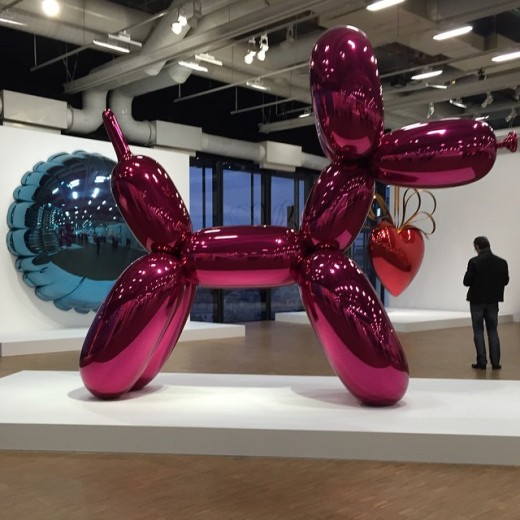 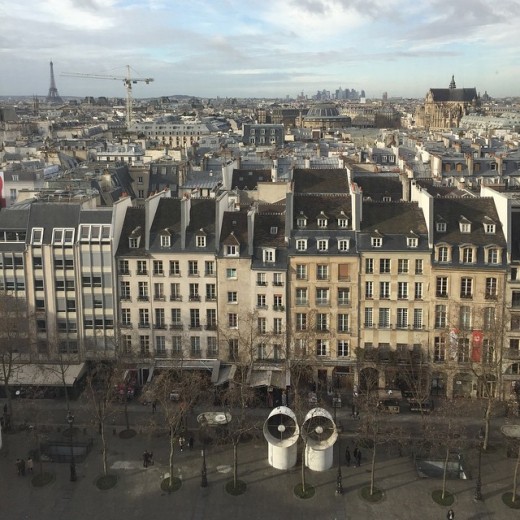 My friend Alison was in town and we were surprised how much was open on Christmas day, particularly in the Marais. Yes, it is the Jewish quarter so falafel was open, but we even enjoyed lunch at Le Loir dans la Théière. We had way more options than we expected. I think Christmas dinner is probably a bit harder in terms of what is open. Every year Paris by Mouth compiles a handy list of restaurants open around Christmas and New Years. 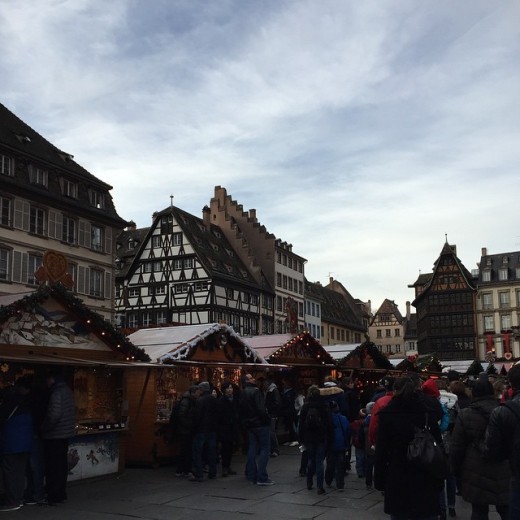 When it comes to Christmas markets in Paris, many tourists I showed them were a bit overwhelmed. Over time they’ve definitely become more commercial and have lost much of their spark. The marché de Noël at St. Germain is probably your best bet for finding anything handmade. There are also markets along the Champs-Elysées and Abbesses, amongst others. The locations may change slightly from year to year. Also, the Marie (Mayor’s Office) of every arrondissement is always festivally lit up.

For a more “authentic” market plan a trip to Strasbourg (I finally did this year, and highly recommend it) which is known as the “Capital of Christmas” were there are 12 Christmas markets in a very walkable city, or other small towns in France (such as Metz), or cross the border to Germany. For me the best part of the Christmas markets is vin chaud (mulled wine)! UPDATE: See post here. 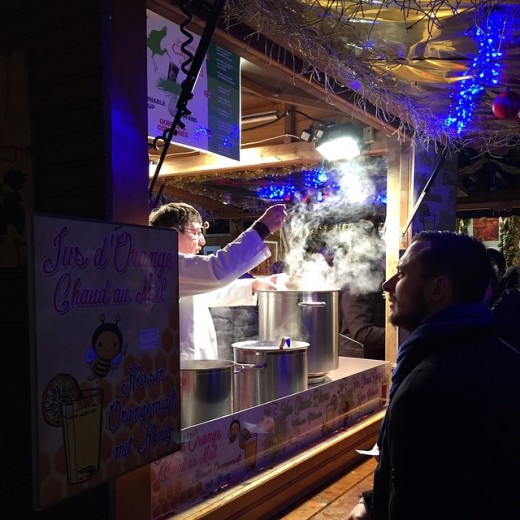 Another treat during Christmas season are the “bûche de Noël” and every year boulangeries seem to get more and more creative with this log-like cake. This year Picard the frozen food store even created ice cream igloos and trees that were creatively packaged. Aux Merveilleux de Fred a delight to see being made (see below).

The further you get away from city center the less crowded/crazy many of these places will be. It’s also the perfect excuse to explore a different side of Paris. One place not to miss is the Festival du Merveilleux at Musée des Arts Forains in the 12th arrondissement . I visited last year and it was truly magical. The museum is closed most of the year except if you book a private tour, but the Festival des Merveilleux is so fun when all the old amusement rides and games come alive again. Once again, I recommend going when it opens, as it will only get more crowded throughout the day.

Here are some more links for planning to spend the holidays in Paris: