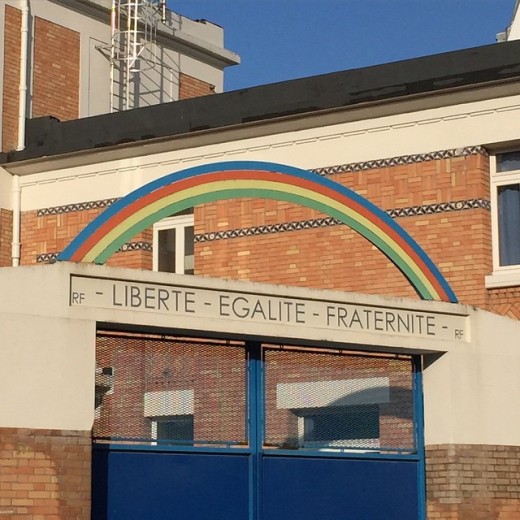 Tomorrow marks 1 month since the Charlie Hebdo attacks, which in many respects feel much longer ago than that. I’ve been wanting to post about what happened for some time, but haven’t found the words, nor time until now. In short, I was very impressed how Paris handled everything. A few weekends ago I Instagrammed the photo above. The caption read:  Strolled through Fox’s “no-go zones” which are my favorite areas in Paris. I love how diverse and international Paris is and I can learn a lot about the world without going far. I feel safe here. #paris75018

At the time I followed the developments of Charlie Hebdo offices closely thanks to Twitter. A journalist from Yahoo Travel reached out to me. Only a short comment I sent over made it into the final piece, but I thought I’d post my full reaction I had sent her below, and expand on a few observations. While Paris feels back to “normal” I still felt it was important to share.

When I first studied abroad in Paris I arrived two days before 9/11. As an American it was strange to experience it abroad, but I felt safe here and received compassion from strangers. As bizarre as it sounds, soldiers with machine guns in the metro were never anything I saw as fear inducing so much as protection. You still see men with machine guns all over – particularly in front of Jewish institutions. Am I the only one who worries they are not warm enough with their close shaved hair cuts and small hats? It’s been very cold lately.

On January 7th I was on my way back from the pool on metro line 8 when I heard that the stop Richard Lenoir (line 5) had been closed by the Prefecture of Police. That is different from the typical closure announcements, so I should have known it was something serious. It wasn’t until I got off at my stop and got outside that I received a text from a French friend who was on holiday, asking if I was OK because she knew I didn’t live far. She did make the point to say that the events seemed targeted to the newspaper, Charlie Hebdo. I immediately pulled up Twitter and saw what had happened. I told her I was fine and headed straight home, even skipping my plans to pick up groceries. I realized later the metro where I got off essentially runs parallel to line 5 in that area and I walked across the same street where they [shooters] had driven away. After the video emerge the next day I recognized the location where the police officer lost his life, as I know Richard Lenoir, because I often walk to the market there on Sundays. It was a reminder of what a small “big” city Paris is. There is never an excuse for violence of this kind, but the realization that it was a highly targeted attack seemed a stark contrast to many of the headlines in the US regarding attacks.

I spent the majority of the next few days in my apartment glued to the internet, tweeting and sharing what I learned, along with a few observations when I eventually ventured out (sirens, sirens, sirens, sirens…). My goal was to stay educated and aware, looking for facts before sharing rumors.

That Friday I met a friend for lunch in central Paris, and when we left I looked at my phone to see the news of the hostage situation at Hypercacher. I know Paris is a small city, so I decided to walk home, taking the long route avoiding any place that had the slight chance of being a target. The thing that made it scary is how many sirens I heard around Hotel de Ville, while not knowing what was really happening. I’d look around and see tourists smiling and going about their own thing. That’s what made it eerie to me that day. But a couple weeks later I was walking that same route alone at night, and realized I really do feel safe despite feeling scared that day. 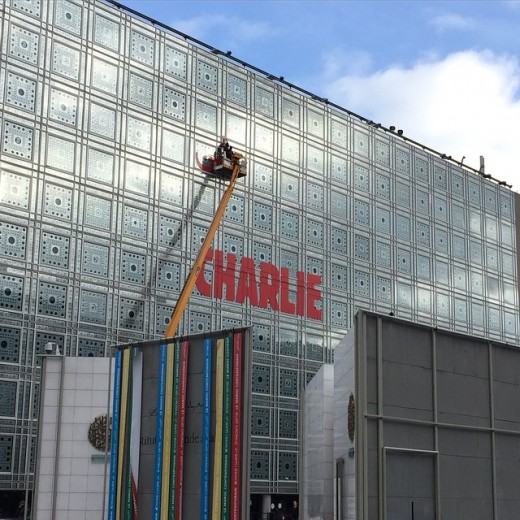 The city of Paris reacted fast from making Charlie an honorary citizen with ‘Je Suis Charlie’ banners in black and white outside Hôtel de Ville (city hall) to this Je Suis Charlie installation in French and Arabic going on the Institut Monde Arabe the day of the march.

What I think impressed me most was Friday night after the hostages had been freed I watched the French news (FRANCE24 is international news from a French perspective in English, French and Arabic channels). Myself and so many of my American friends in Paris noted how refreshing the news coverage here was vs some fear/terror inducing headlines I saw coming out of the US. The reporting in France was clear, smart, and didn’t point fingers or overly speculate. The French style of news often involves a panel or debate, and I heard from experts in terrorism, negotiation, about the French police and more. It was enriching and reassuring, in a way that is not easy after such a dramatic and traumatic series of events. As I see headlines shared by friends around the world, I do still think that so much that happened in Paris is hard to grasp if one doesn’t view it in context and take into consideration the French perspective (and history). The conversation needs to continue. 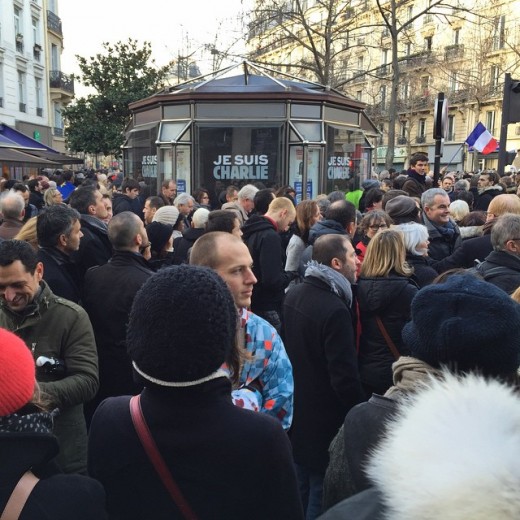 I just know I refuse to live in fear, and I think the January 11th march proved an incredible solidarity amongst the people in France. I found myself over a mile away and everyone was going the same place. The crowds were packed so deep, and it was truly moving (not to mention you could barely move). The turnout was incredible. From posters to pencils in pockets it was a huge relief that it was a peaceful march. I don’t handle crowds well, but did do the full march later in the evening to see what remnants and reminders were still around. 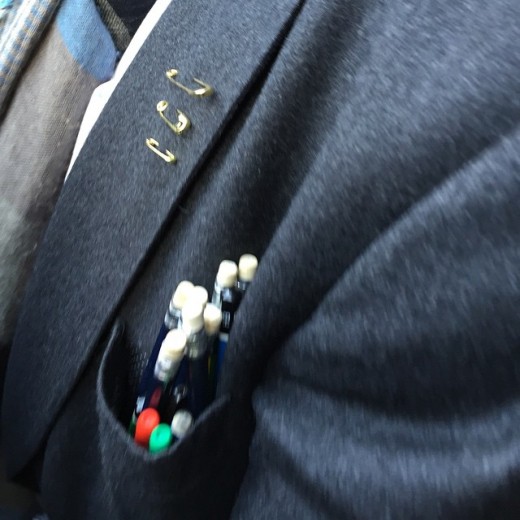 For me, I was also reminded of cultural differences in surprising ways. Many Americans may have been surprised to see “Waldo” in the crowds, but in France he goes by “Charlie” (in the UK he’s “Wally”). Hence he became another way to say we are “Tous Charlie” – we are all Charlie. 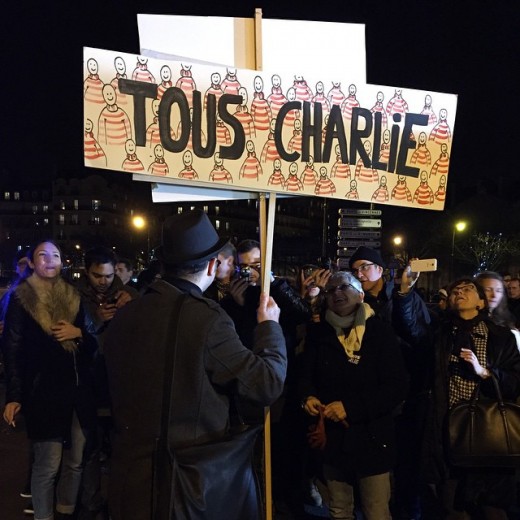 It’s still hard to fathom that week in January. As hard as it sounds, it did bring France together. Solidarity is the first word that came to mind for me. Now, a month later, it is the stories of hope, like the Malian man who helped hostages escape at Hypercaher (he later received French citizenship), which are the stories that stick out in my head. 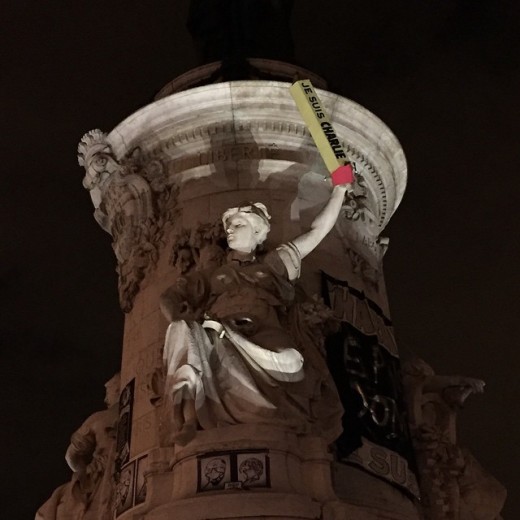 For additional reading, here are some of the articles that I found interesting at the time:

I was proud to get to work on the Parsons Paris holiday card this year. Alongside my colleagues this was our response to Charlie.