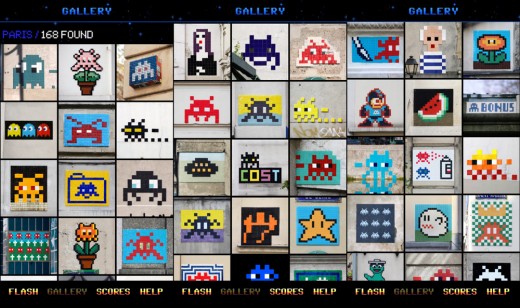 Invader is a French street artist who has been “invading” the streets of Paris – and the world – since the late 90s. In 2014 Invader launched Flash Invaders app that is a retro modern interactive scavenger hunt battling against human competitors around the world as you wander the streets hunting for Space Invaders.

Life goals come in many forms. For me it recently was getting to the Top 200 of the Flash Invaders app. Between my Fitbit step count fixation and tours of Paris that keep me exploring, flashing Invaders became second nature to me (and I’ve gotten several friends hooked too).  I realized I was getting closer to 200th place a couple months ago and it seemed like a good goal. It took much longer than expected to reach it, as I constantly was battling out other competitors. It was a big weekend of Invaders for me. I was so close, I sought out the blue Invader that took me over the top. Now it’s anything but “game over”. 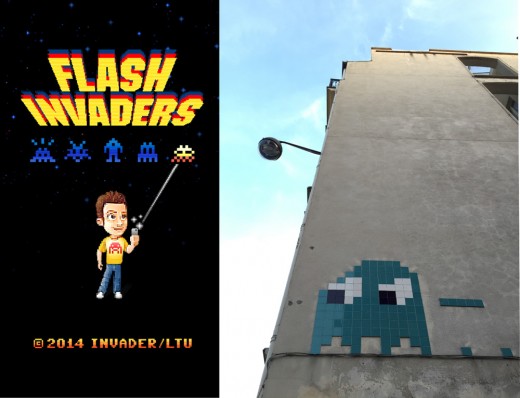 Best App Ever! Download the Flash Invaders app from the App Store. Take a photo of the Invader – aka “Flash It” from the app and let it process. It works with GPS [zoom in to get the target] and images have to be taken through the app, so there’s no cheating. Make sure you have the sound on, because the app not only looks like a retro video game, it sounds like one too! Each Invader is assigned a point value and you are scored. Your ranking can go up and down as you play against others around the world on the app. 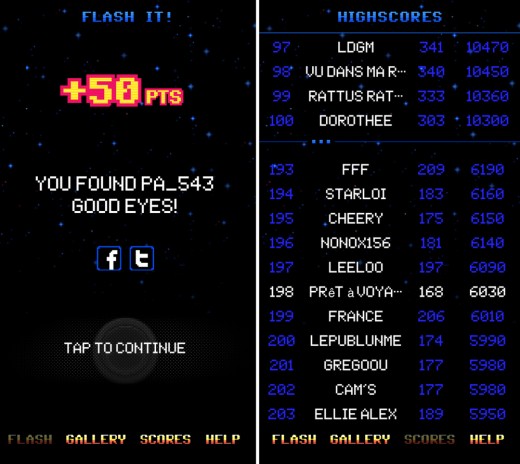 Ta-da! I did it! Not only did I get past 200, but I made it to 198! And I managed to do so with fewer Invaders than those around me (168 to be exact for a total of 6030 points). I’d been actively chasing Invaders in recent weeks, but turns out there are some very serious competitors as a routinely hovered around 207th place despite flashing another dozen Invaders. My glory of 198th place won’t last for long, but I still achieved my goal! 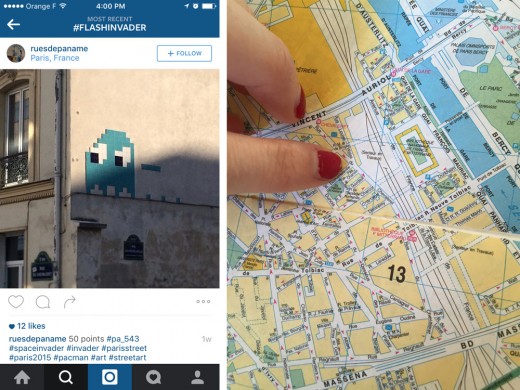 Now that I’m far enough along in “the game” (& my goal of making it to the top 200) I’ve been known to do some extra research. In addition to @invaderwashere (the official account on Instagram), players often tag their images #FlashInvaders. This feed pulls from Invaders all over the world, but there is still a large centralization in Paris (and I clearly need to go back to Tokyo, with a different mission in mind). The example above involved me staring at the Instagram post on the left and trying desperately to figure out the names on the blurry street signs (on the Invader account they often blur street names to make it harder to find). I used my typography skills to pick out a few key letter forms before breaking out my Plan de Paris map book. A quick cross check on Google Street View and booyah! I found it. True Story. I’ve also been known to stare at shop signs in images and Google all the locations until I find one on Google Street View with a wall that mimics a recent invasion. Don’t worry, it’s a healthy habit and gets me exercise! 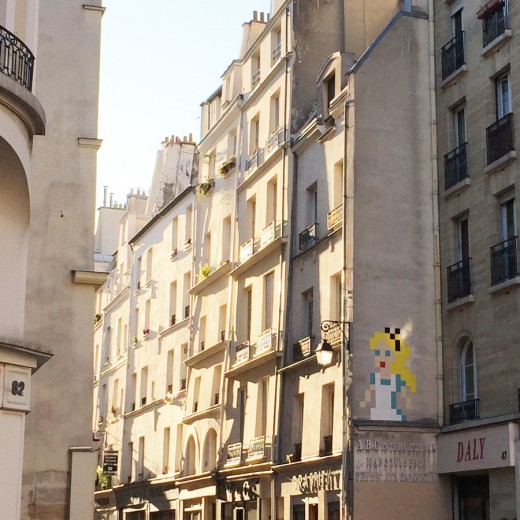 The way it works is the larger the Invader, the higher the point value. (I know, it feels like it should be the opposite because the smaller ones are often much harder to find). Alice here was +100 points. A lot of times I’ll figure out which neighborhood an Invader is in, so it’s a perfect excuse to walk for hours, as was the case here. 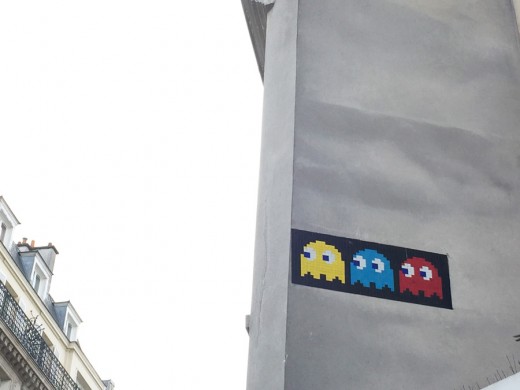 Invaders come in many shapes and forms, but most are inspired by video games. 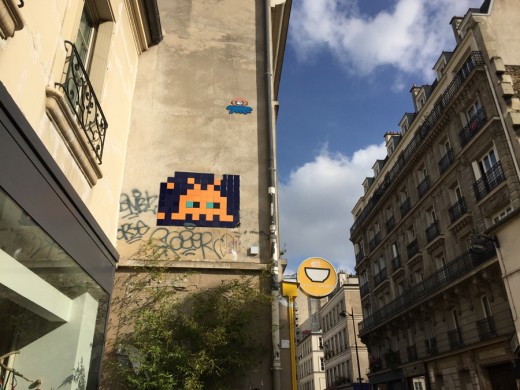 Over time, sometimes Invaders lose tiles (or they are intentionally defaced). Tip: go ahead and flash them even if they’re in bad shape, you’ll likely still get the points. Also, sometimes old Invaders are repaired and reactivated. 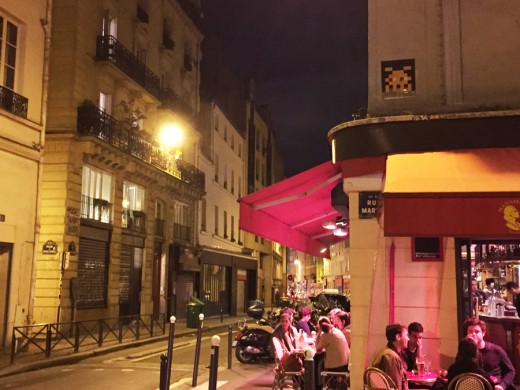 After spotting this one online with the street sign, I may have taken a 40 minute detour last week in order to get the points. I’ve been flashing Invaders for over a year, but still have snapshots in my head of ones I need to go back and find again for the points. 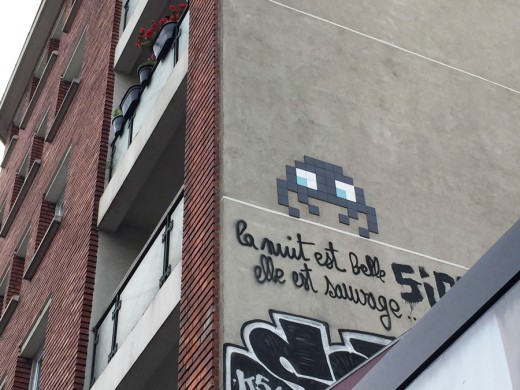 There are many copycat Invaders in the world. The app ensures you’re finding the real ones. (This is a real Invader). 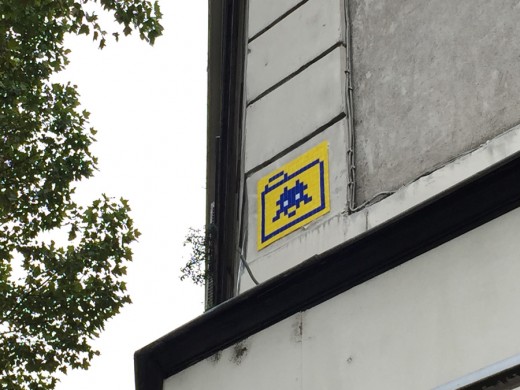 Street corners are the best place to keep your eye out for Invaders. But I’ve also found one in a swimming pool and another in a bookstore. I’m still keeping my eyes out for the one in the Pizza shop! 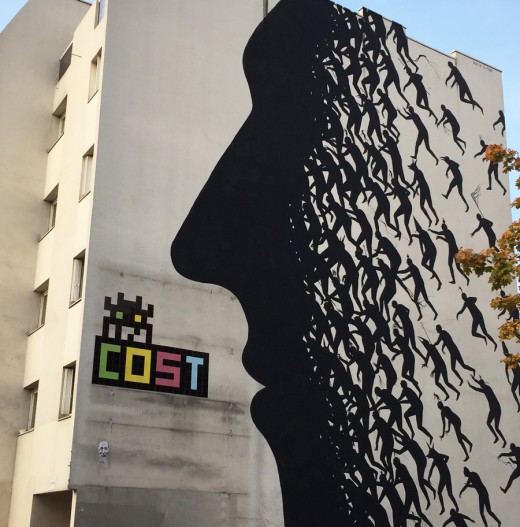 With the app, sometimes you forget that you’ve already gotten the points for a particular Invader. Don’t worry, the app has a sense of humor and will remind you you’ve lost your memory. 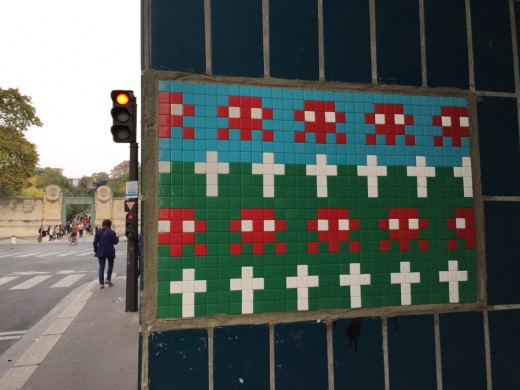 Sometimes the Invaders may have a theme related to their environment. (Père Lachaise cemetery pictured in the background here). I also love that I walk Paris so much that I can see a tile wall, an shop awning or a small clue in the background and easily identify where it is. 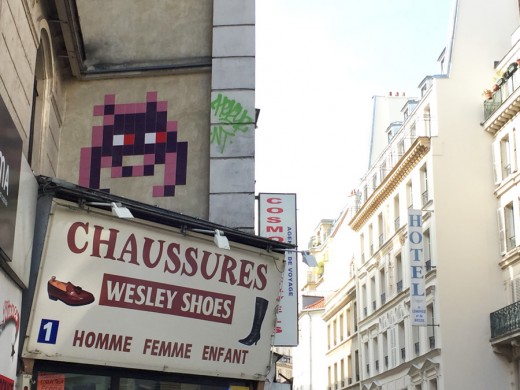 In a world where our phones keep us looking down, Invaders keep others looking up! 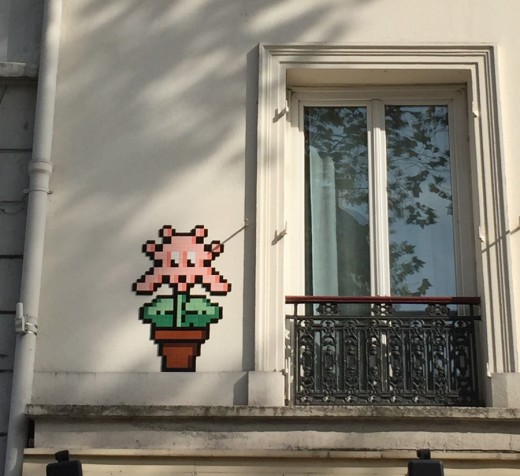 Sometimes you’ve walked a street a million times, and then one day an Invader appears. Perhaps you’ve never truly opened your eyes, you finally walked the other way down a street, or maybe there was a new Invasion.

Download the Flash Invaders app, and learn more about French street artist, Invader, and more of his rad projects. Many are well documented online (see Paris Summer Invasion) and at @invaderwashere on Instagram. Long before the app, Invader has carefully documented each Invasion, which are compiled into beautiful books (complete with maps with point values in the back).

Secrets of Instagram to Plan Your Next TripNuit Blanche Paris 2015