After the Attacks, Paris Resilience 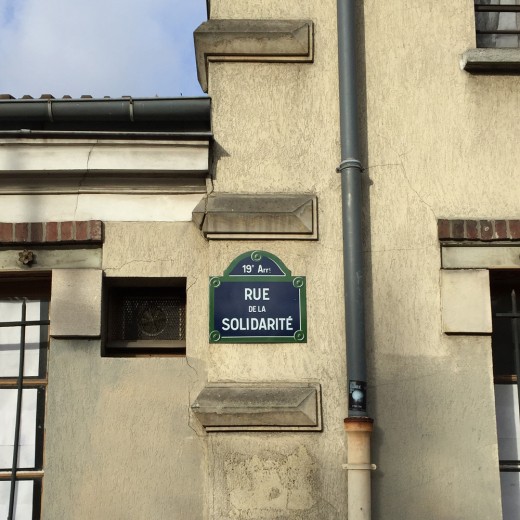 There are too many days in history where one minute changes everything. In a city where I always feel so safe (with the exception of a higher risk of pickpockets), the Nov 13th Paris attacks were, and still are, incredibly surreal. The majority of the attacks were in the 11th arrondissement – my neighborhood! – and nearby 10th. Much has been written since about these neighborhoods, and the fact that they are multi-cultural and welcoming places. The locations targeted still feel so arbitrary to me, and I very well could have been at any of them. I have friends who had plans to be at the cafes and restaurants, but plans changed for one reason or another that night.

I feel incredibly fortunate, that in a small city, where I know hundreds of people, I did not know any victims. However, I am only one person removed in several cases. I’ve found myself donating to people and families I’ve never met, but it’s part of the healing process. The first week was the hardest, the longest. Every day starts to feel a bit more normal, but you still ask a friend “How are you?” and the response is still mixed. You feel strange going on like nothing happened, but at the same time life is way too short to live in fear.

And as terrifying as terrorism is, the way I see it, we’re still more likely to be victims of a car accident from crossing the street by looking at our phones instead of paying attention to where we are going. To be honest what is scarier to me now is some of the anti-refugee and religious rhetoric that I’ve seen come out of the U.S. When everything was unfolding, I once again was very appreciative of European news coverage – particularly watching the France24 livestream on Youtube – that is balanced, smart, straight reporting, not speculative or fear inducing.

Throughout everything, Paris has proved its resilience. And that’s what makes this city so amazing. The images below are all part of my own healing process. 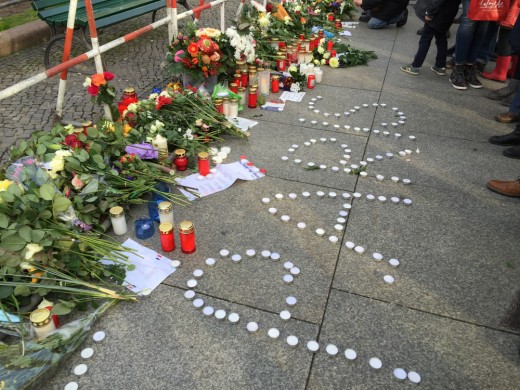 I was in Berlin when the news of the attacks happened, set to catch a 6am flight the next morning. For the first time ever, I intentionally missed my flight (thankfully the airline was incredibly understanding and rescheduled). Everything had taken place in my neighborhood, at places I pass on a regular basis. I was up until 4:30am following the developments and there were still so many unanswered questions. Instead, I stayed in Berlin for an extra two days. On Saturday a German friend took me to Brandenburg Tor where the French Embassy in Berlin is, and where crowds were paying their respects. 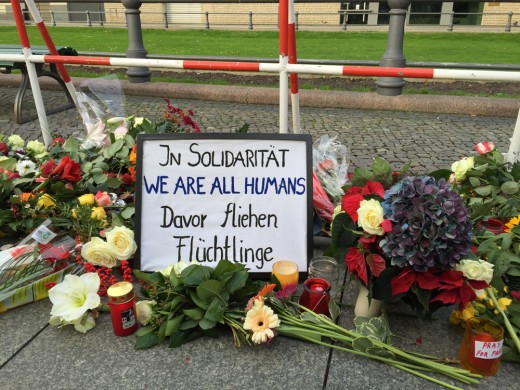 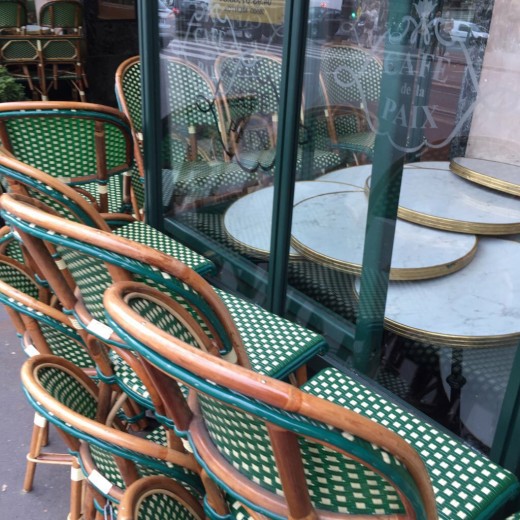 When I returned to Paris on Monday there was a chill in the air, with the grey skies and quiet streets. Tourists were out, but their heads were in maps so they probably didn’t notice the lack of people on the streets. I walked by Café de la Paix near Opera to see the tables and chairs stacked and the terrace closed. I felt like I processed a lot while I was away, but that day felt far more overwhelming than I expected. 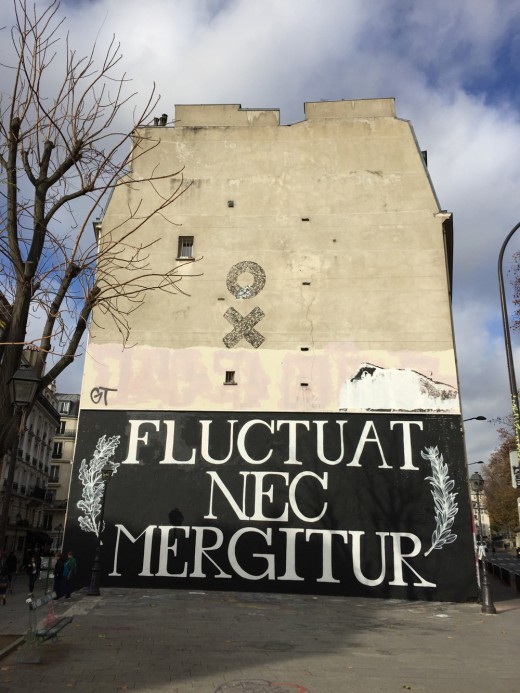 Fluctuat Nec Mergitur is the Latin phrase that appears on the Paris coat of arms and translates to “tossed but not sunk.” I didn’t expect to pass two attack site memorials in my neighborhood on my way to this wall (I was on autopilot- a typical route I take). I hadn’t made the connection from news reports, and then I saw flowers. It still feels unimaginable. Many people were there paying respects as the city works to heal. 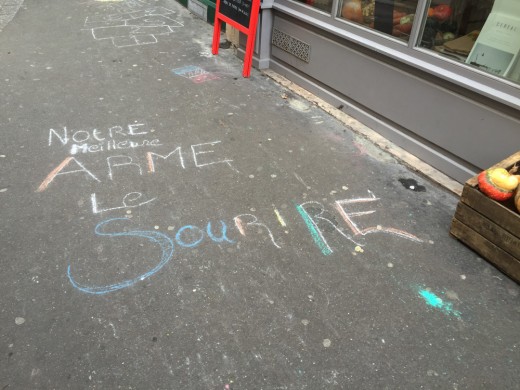 Notre meilleure arme le sourire. Our best weapon is a smile. Spotted in the 10th arrondissement. 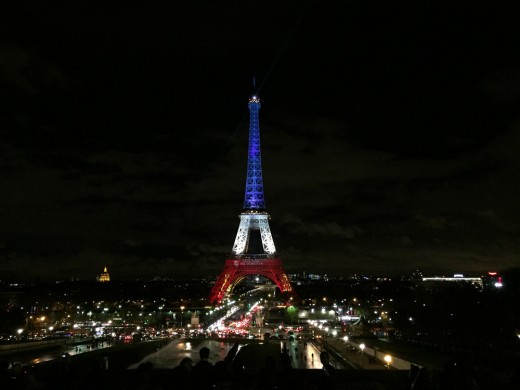 Like many monuments around the world, the Eiffel Tower turned bleu, blanc et rouge. 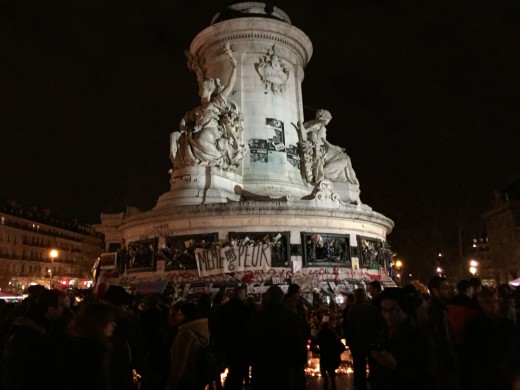 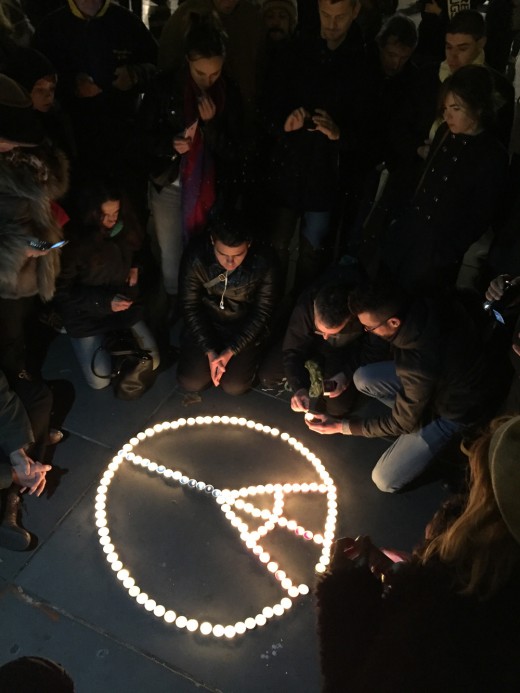 A moment of peace at Place de la République.

Many of these images already appeared on my Instagram feed, where I often tell stories and share my impressions when I don’t have time to blog. I shared thoughts on Twitter as well.