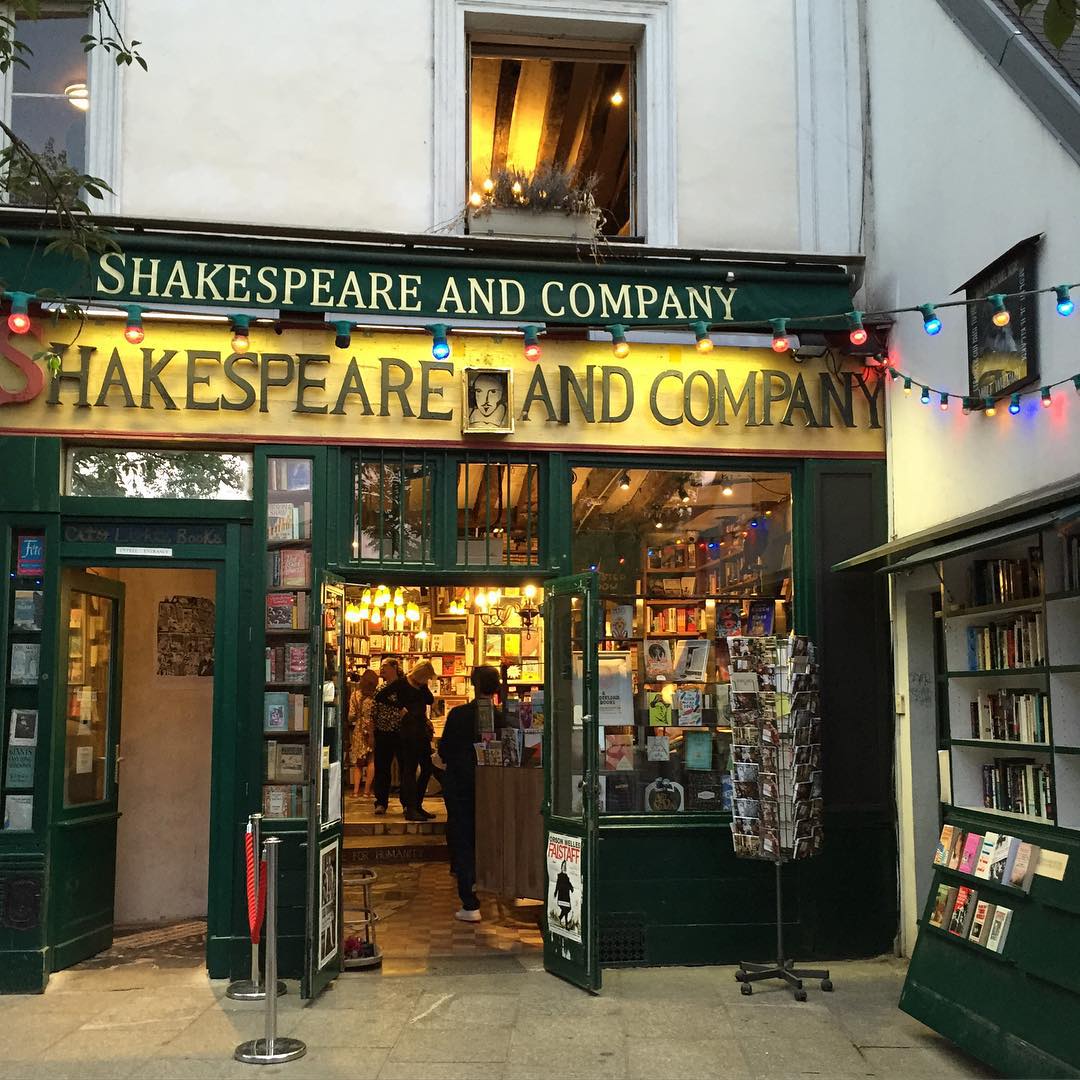 Not much is new about Shakespeare & Company bookstore, with its rickety floors and uneven ceilings, this place is a monument in its own right. It’s a place with quite a bit of history, however, there are three small additions I thought worthy to write about.

First, this fall a dream came true to open a Shakespeare & Company Café on the corner next to the shop. This was always a goal of Shakespeare’s founder George Whitman, but only came to fruition after his death. Food and coffee is by Bob’s Food Etc. (try Bob’s Juice Bar, Bob’s Kitchen and Bob’s Bakeshop) which has some of the best and healthiest food around, in addition making some of the yummiest bagels I’ve ever had. The only downside is that it’s hard to grab a table in the small Paris establish. The outdoor tables are great when it’s not raining (don’t be fooled by the empty ones in the photo below!). 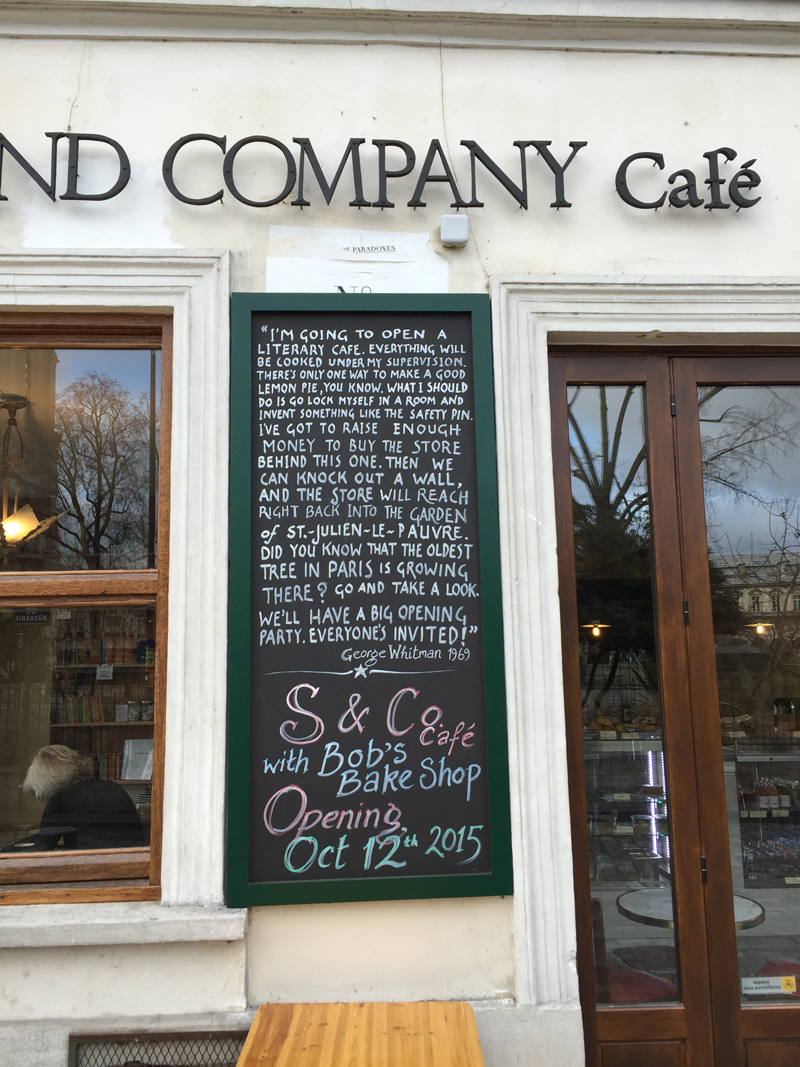 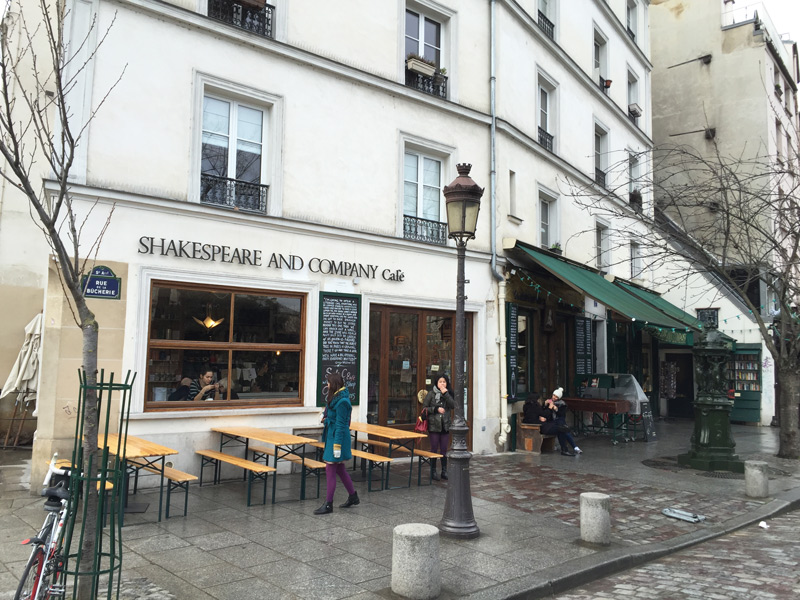 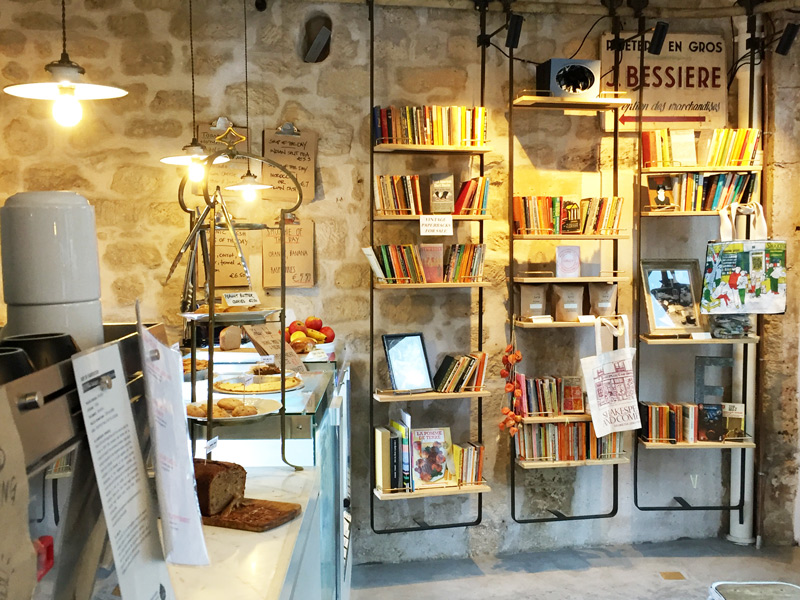 Second, there are readings and events several times a week at the bookshop. Recently I stopped by for a reading by Ethan Hawke, who was in town to promote his new book Rules for a Knight. For anyone who has seen Before Sunset this was like a dream come true, as the movie opens with him doing a reading at Shakespeare & Co. (note: see Before Sunrise first if you haven’t – nine years pass between the films; these also happen to be two of my favorite movies). The event was way too popular for me to get inside, but I did manage to get a pretty good photo through the window. I’d actually heard him do a reading at UVA years ago, but this was next level given the setting. You can listen to the podcast of the event with Ethan Hawke on their website. 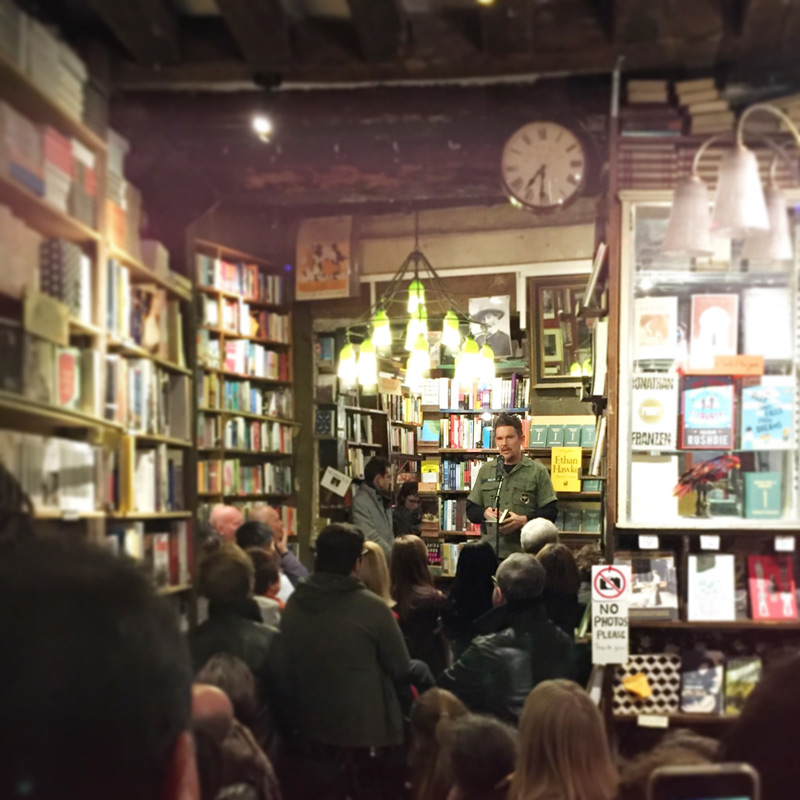 Finally, Shakespeare & Company is the latest Parisian shop to sell my Herb Lester Paris Small Shops map! And [currently] you can’t miss it on the check-out desk. It’s such a dream to have my map sold here, and as it’s all about supporting local small shops (check out #ParisSmallShops on Instagram), so there couldn’t be a better fit. (And in the spirit of supporting small shops, stop by and say hello to Stephane at Librairie Galerie Louis Rozen in the 5th, who sells a wide range of the fabulous Herb Lester maps of various cities, as well as some very cool retro inspired posters and books!). 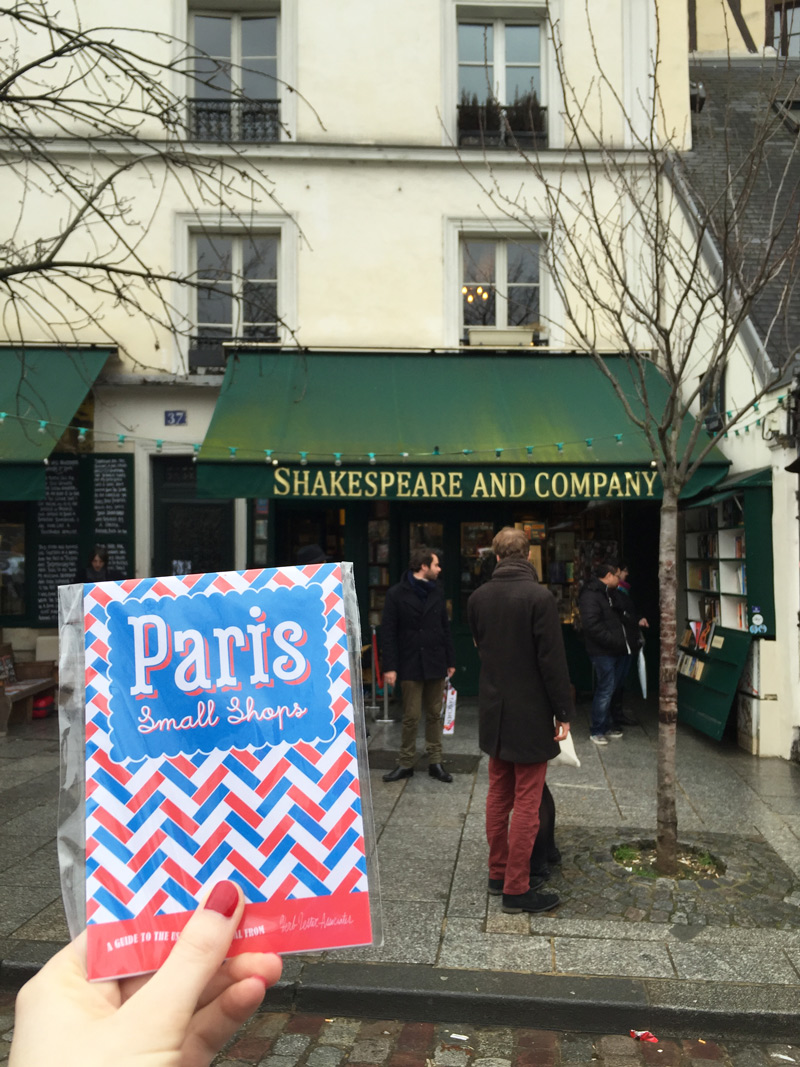 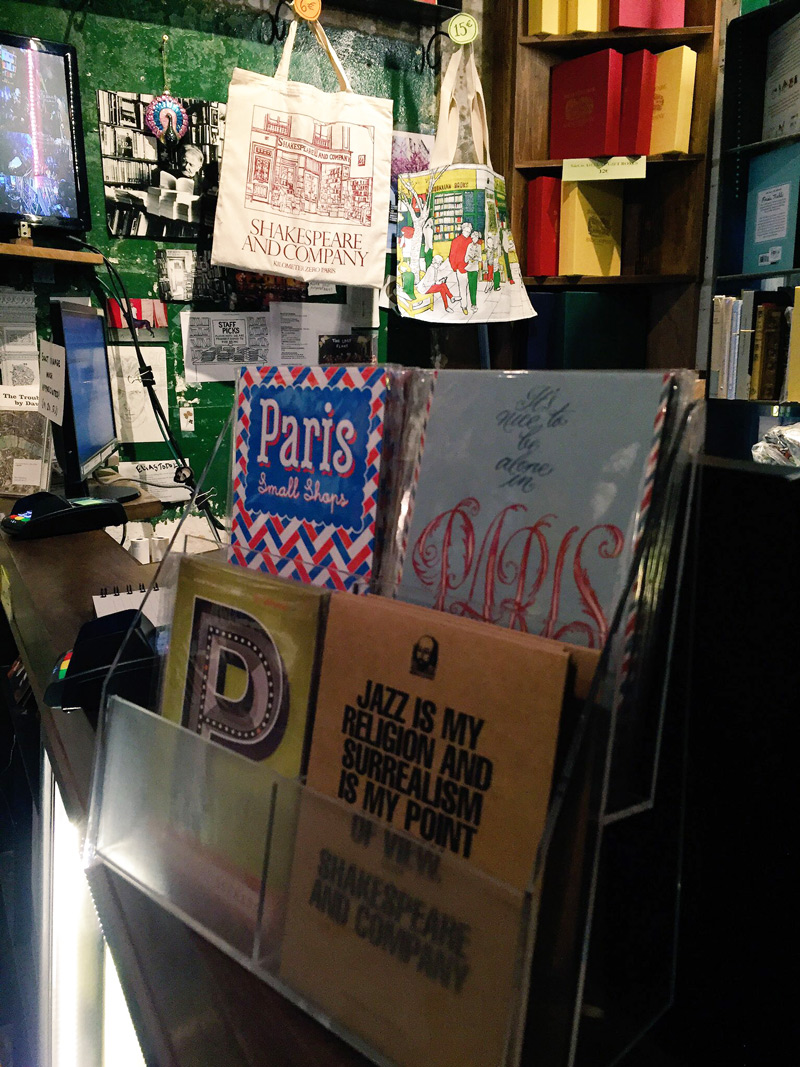 There are so many great bookstores in Paris, and some of that is due to the restrictions that the French government has put on Amazon. From my experience French are voracious readers, and I love passing so many book shops around the city. Every morning on the metro I do a little tally to see if more people are reading print or looking at their phones; believe it or not books and print often win out!

The other perk of Shakespeare & Co. is that they stamp your book to prove you bought it there. It’s almost as good as a signing, and makes for a wonderful souvenir! They’ll also give you a cool bookmark, and they have great tote bags (see above) for sale. 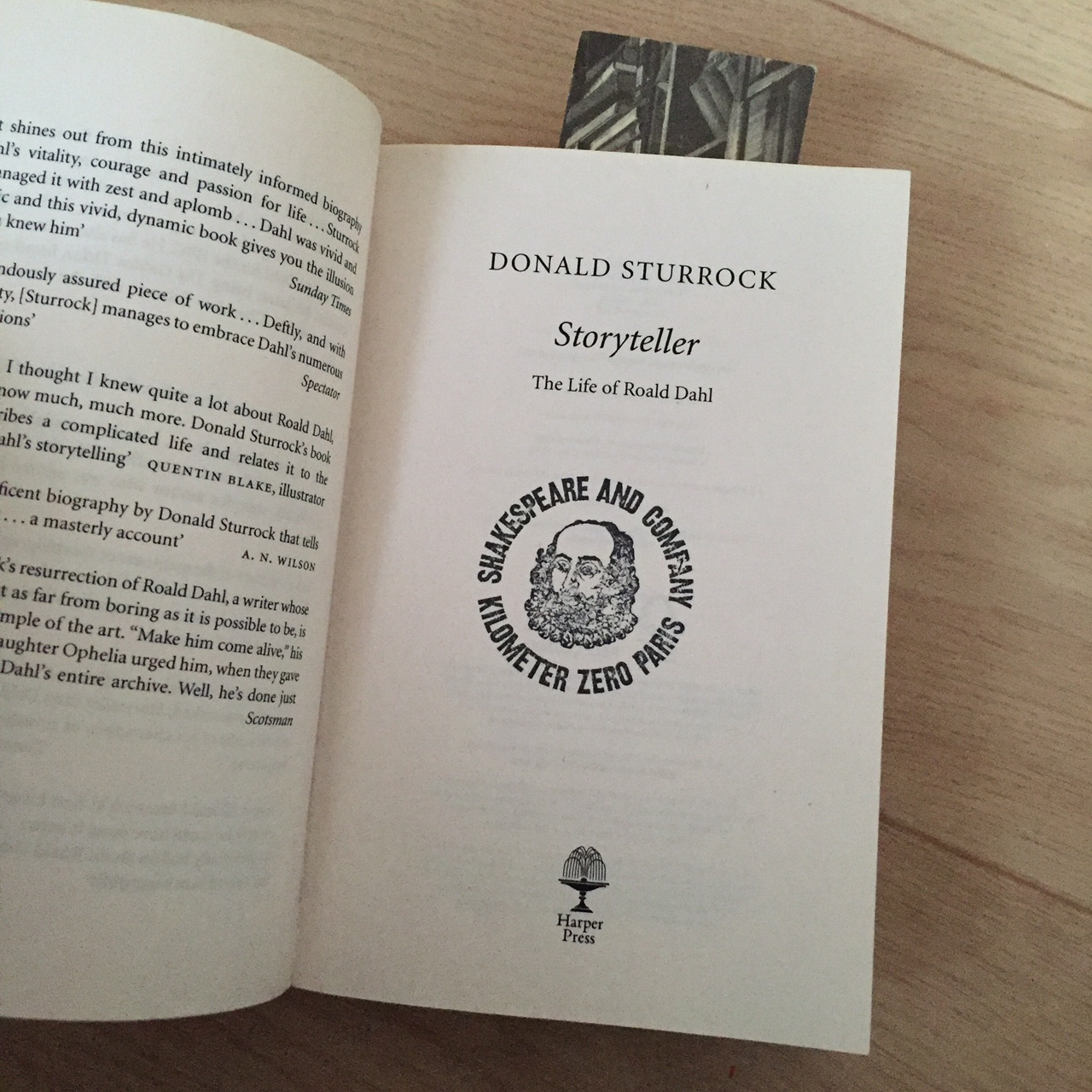