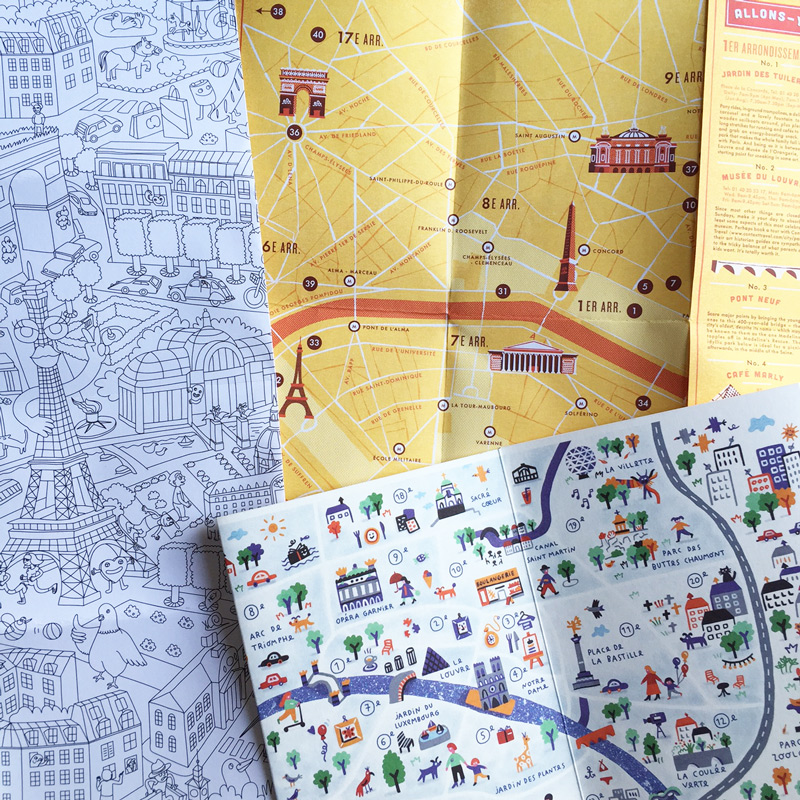 As time flies, I find that I increasingly have more friends traveling to Paris with kids, so I thought it was high time to put together a post with my favorite resources. Don’t worry, everything applies to kids of all ages. Yes, that means you!

Not so traditional guides:
Paris en Famille map from Herb Lester (the same company as my Paris Small Shops map). Not only is it practical, it’s a nice souvenir.

The New Voyager: Paris – a city map for cool kids (or big kids like me).

OMY Paris coloring map, placements, and giant wall poster. (Entertainment or a souvenir. Coloring books are all the rage in Paris too).

Sign up for a THATlou scavenger hunt of the Louvre, d’Orsay or more.

Cheap things to do:
Ride the metro (particularly line 1 – trains come from left to right, so wait on the far right so you can get a front-row seat in a driverless metro car). Pick up a free mini metro map at a metro kiosk for kids to help discover the route. Maps are always fun! Older kids can draw their own.

Ride the public bus so you’re above ground and can see everything. (Bus 69 goes by many major sites). The bus is also much easier than the metro with a stroller. [Uses same tickets as the metro.]

Get a sense of the city from the river on a Seine River tour. (Vedettes de Paris / Bateaux Mouches leave from Ile de la City (Pont Neuf) and also by Trocadero [Eiffel Tower] and Pont d’Alma – typically every hour or more frequently).

Go to the park (actually stay by a park too). They’re all over the city, and you can expect to run into a lot of other kids after school. The playground at the Luxembourg Gardens is one of the best (it’s also the only one where you have to pay for the play area; adults have to pay too), and lots of cool stuff to climb, and there’s a zipline for older kids. Luxembourg and Tuileries Gardens are the most likely to have sail boats for the ponds. Trampolines are at Tuileries Gardens (1st arr). Giant plein air sculptures at Parc de la Villette (19th arr).

Run around the black and white Daniel Buren columns in Palais Royal gardens (1st arr). (Parents, you can get a coffee at Kitsuné.)

Visit the passage ways of Paris.

Carousel ride in one of the parks (Eiffel Tower usually has one on both sides of the tower, but the animal one in Jardin des Plantes may be the most memorable!).

Visit the colorful moving fountain next to Centre Pompidou.

Look for animals on doors and buildings. They’re everywhere.

Have a joust fight with baguettes in front of the Eiffel Tower. (I did this with high schoolers on a tour, but it really works for any age).

Pretend to be a statue.

Watch the Eiffel Tower twinkle – every hour on the hour for 5 minutes when it’s dark. (Warning: in summer that can be as late as 11pm!)

Where to eat:
Try to find restaurants that are “en continuation” which means that they serve food all day, rather than closing after lunch. Typical cafés and brasseries will serve food all day. Note, that it’s not very common to see kids (even high schoolers) out at restaurants. Always try to go on the early end (noon for lunch, and 7-7:30pm for dinner to avoid crowds; typical dinner starts at 8pm).

Go to a creperie! (Breizh Cafe is the most famous; there are a lot on Rue Saint André in the 6th arr to make things easier, and each has a theme–personally I like the one where you feel like you’re in a ship!).

Falafel on Rue des Rosiers in the Marais. (There are several on the street, don’t feel pressured to visit the one with the longest line that has made it into every guidebook).

l’Ebouillant – great for lunch, and has an outdoor terrace when it’s nice out (between Notre Dame and the Marais)

Increasingly boulangeries like Eric Kayser or Maison Landemaine have seating inside.

Whatever you do, don’t try to see and do it all. Mundane moments like going to the boulangerie [bakery] can be some of the most memorable moments of a trip, and those lines tend to move a lot faster than any major site! Check out more Paris resources (and how the 20 arrodissements work) on my VISIT PARIS page!