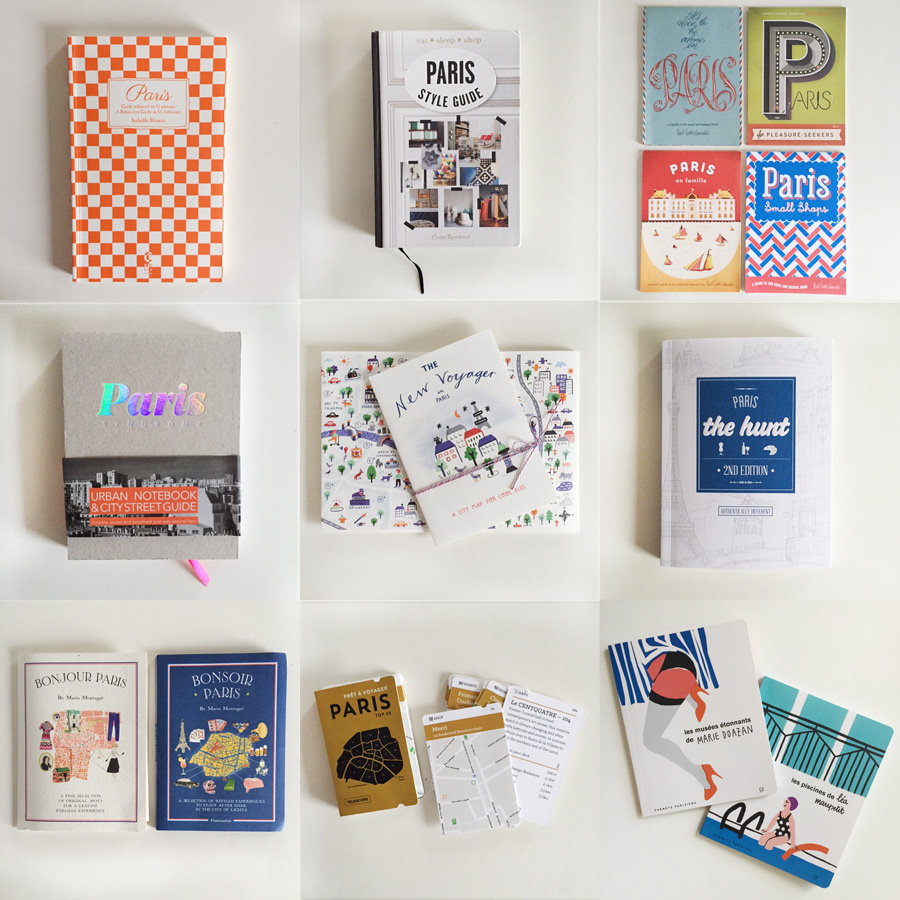 Have you ever started a collection without really realizing it? For me it’s Paris maps and Paris guide books. I’m fascinated by the way people travel and how they use various tools and resources to travel. I’m dubbing this series “Ready to Travel.” Get it? It’s the translation of prêt à voyager! I have much more to share beyond just travel guides. In fact, I’ve had it all in drafts since January, but I figured it was high time to get this series going! I have an idea for what my own dream Paris travel guide would look like, but until it comes to life, I wanted to kick things off by sharing a handful of my favorite Paris city guides that are less mainstream and help you really explore the city in a less touristy way. Besides, they’re all beautifully designed and you can’t help but want to touch them or keep them as a souvenir. Even if you’re not coming to Paris anytime soon, these guides are great for armchair travel.

Isabelle Boinot‘s Paris: a Subjective Guide in 53 Addresses of her favorite addresses with her own simple illustrations and a short description in two languages (some variety of English, French and Japanese, so pay attention to which edition you pick up!). All of the addresses are very local and you’d be likely to find me at any of them.

Paris Style Guide is French stylist Elodie Rambaud‘s guide to the city, which encourages you to go a little deeper into the city as she shares her favorite locations where scouts for photoshoots (speaking of which Elodie took all the photos too!). The French title is Paris Shopping Insolite, which refers to insider or hidden places. Depending on the country where it’s published the book may have a different cover. Elodie was also one of my first French friends I made in the city because of our love of exploring!

I may be partial to Herb Lester City Maps because I wrote the Paris Small Shops edition, but I was a longtime fan before I contributed myself. Their collection includes maps for cities around the world, but when it comes to Paris there’s also Paris for Pleasure Seekers, It’s Nice to Be Alone in Paris, and Paris en Famille. Each map guide is illustrated by a different illustrator and printed on quality paper in the UK, which makes for the perfect souvenir. You can also purchase the entire Paris collection.

Paris Syndrome guide by City Syndrome is named after the actual disorder some tourists, particularly Asian, experience when Paris doesn’t meet their expectations that they’ve seen in movies and on television. So this urban notebook is a city guide meets journal with a few clues and photos to get you exploring and re/discovering Paris to help serve a more realistic guide to the city. It also acknowledges addresses are constantly opening and closing, so it’s not attempting to be an up to the moment guide, but rather one that encourages you to write your own story.

The New Voyager city maps were created by Emma Swinscoe as cool city maps for kids, but the fact of the matter is that they’re great for any age.  Each map is the same format but illustrated by a different illustrator with a map on one side, and 25 locations on the other, so it’s well curated and not too overwhelming. The Paris edition is perfect for giving kids a taste of Paris and then hanging in their room after the trip is over.

The Hunt Guide is a series of pocket-sized guides that help you discover more local sides of the city. The Paris Hunt Guide also happens to be written and photographed by my friend Haleigh Walsworth (of By Haleigh, formerly Making Magique). Trust me, Haleigh knows what’s up in Paris if you’re looking for specific addresses.

Martin Montagut‘s illustrated Bonjour Paris map is the one you’re most likely to happen upon in a Paris shop as it comes in an English and French editions. The series has expanded to Bonsoir Paris (Paris at night), Bonjour Provence, Bonjour London, Bonjour New York and more…

My custom Telescope Cards decks were a project I was really excited to work on (see full project post). They’re fun because the format is completely different from any other city guide I know, and definitely pocket friendly. You can make your own deck before or after a trip, or you can pick up my PAV: Paris Top 25 and Paris Piscine [swimming pool] decks.

I instantly fell in love with the new series of mini themed guides Carnets Parisiens published by Galerie Celmentine de la Feronniere. So far two editions exist: Les Musées Étonnants de Marie Doazan (Surprising Museums illustrated by Marie) and Les Piscines de Léa Maupetit (Paris pools illustrated by Léa). While the titles are in French, all the content inside is in French and English, so as a bonus you have a language lesson! I’ve spotted these books at ARTAZART, BHV, and FNAC.

La Ville de Paris (City of Paris) have incredible resources for locals and tourists alike (start with Paris.fr and QueFaireaParis.fr). They also work with incredibly talented graphic designers to create materials and posters around the city. Believe it or now this “First Time in Paris” map is free if you stop into Rendezvous boutique, a cool, less touristy gift shop located inside Hotel de Ville (city hall)—the entrance is across from BHV department store—where they also sell a nice selection of Paris inspired gifts from carafes by arrondissement or mini Fermob chairs. The English version has florescent green text. If you don’t see it out with all the other beautiful printed brochures, you can always ask.

Want more Paris ideas? Check out my Visit Paris page and follow me @pretavoyager on Instagram! Ready to Travel is a new series showcasing my favorite resources and tips for traveling around Paris.