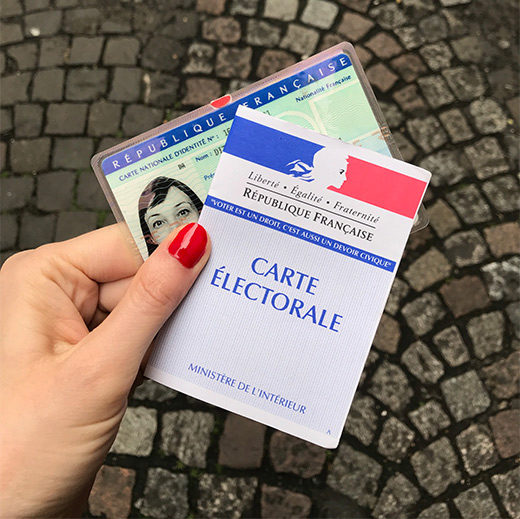 Becoming French has its perks. The biggest perk is never having to renew my carte de séjour ever again, but being able to vote in French elections is high up there too. It’s one thing to follow another system online, but it’s another living and learning to have to navigate a new system. I have to say while we often take what we grow up with as the “right” way to do something. Learning how another country works is fascinating and really we all have a lot we can learn from each other. While I lived here during the Presidential elections in 2012 (French presidents are in office for 5 years), actually being able to vote changes one’s perspective.

To vote in France you have to be 18 years old. You register by December 31st. (I was lucky and filled in my forms right before the end of the year). By early April registered voters receive their “carte electorale” which has your voting locations and you must vote at that location within your arrondissement. Before both the first round voting (April 23) and second round voting (May 7th) registered voters receive a mailing with flyers for each candidate as well their name cards (these you vote with, but are also available at the local voting center). 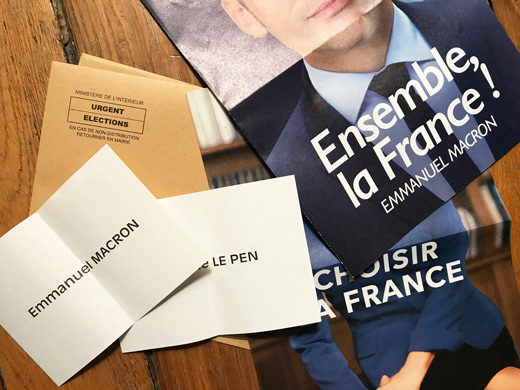 Unlike the U.S. system, the election cycle is much shorter (and far less agonizing in that respect). France is not a two-party system, but rather home to many parties. The first round vote narrows down the large pool of candidates; the two candidates who receive the most votes will move on to the second, and final round. (John Oliver explains the system well.). Typically the two main parties — gauche/socialist and droite — move forward but neither made it through to the second round. In fact, Emmanuel Macron made up a party, “En marche!” translating to “let’s get going,” for his candidature. There are spending limits for each candidate, and each candidate has equal media time. During the debates, there is literally a clock tracking how much each candidate speaks. The debates last over two hours and end after midnight – interesting for a country with only one time zone. 24 hours leading up to the election French media nor candidates are not allowed to make statements (in this case, even to refute what has been dubbed as “Macron Leaks”.). 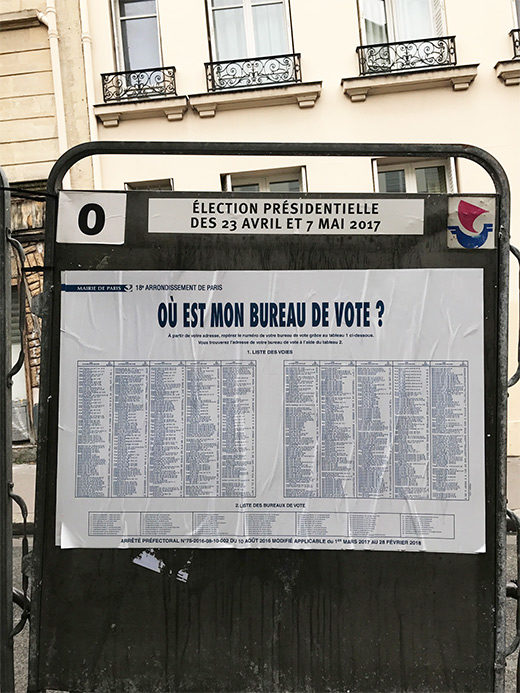 Voting happens on a Sunday in France, which helps account for the country’s high voter turnout which tends to be above 80%. (Speaks volumes to the U.S. which votes on a Tuesday and has about 50% turnout, even with early voting). The catch with the May 7th election is that it falls on a holiday weekend (Victory Day – one of three holidays in the month of May in France). During Presidential elections in France you are only voting for one person, and nothing else. The U.S. scantron and electronic voting system typically has at least 10 things on the ballot. In France there are the two rounds of elections, followed by a vote for the legislators a month later.

During my first ever French election [first round voting] I was in Dublin, which became an eye opening experience on how everything is not what one expects. As an American living abroad I’m used to absentee voting, which involves me applying for an absentee ballot and mailing in my vote to my home state before the election date. My eyes nearly popped out of my head that I learn that in France you vote by procuration, or essentially sending a friend to vote in your your place. My initial reaction was “voter fraud” but after having lived it through two elections now, I have to say it works. It is also very official and you go to the Mairie [Mayor’s office] to register in advance. So while in Dublin at a workshop I received a text from my friend — I voted! For French citizens who live abroad it is common to register and vote at your local French Embassy. The queue may be long, but there’s a certain pride that goes along with voting in person.

So how does voting actually work?

Congratulations! You may not have an “I voted” sticker, but you have voted in France! And now that I’ve voted and written this post, I have to jet out to vote again. Don’t worry, just voting by procuration, for a friend. Not too shabby to be voting twice in my first official French presidential election ;)