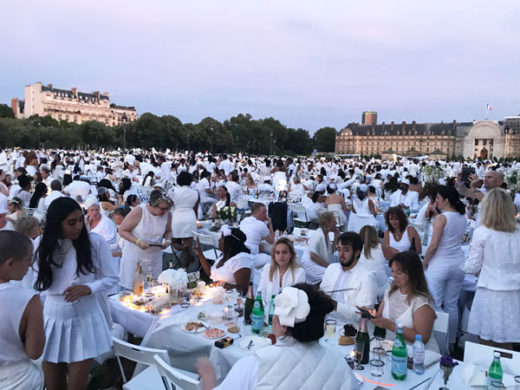 Nine years ago, when I was still living in Baltimore, I discovered a magical event that takes place in Paris called dîner en blanc and posted about it on my blog. The secretive event by invitation-only happens every June where all the invitees wear white and invade a different location around the city. 2018 marked the 30th anniversary of the event, and much to my surprise, yours truly scored a ticket this year!!

Between social media or the fact that the event has spread to cities around the world, the event is not so secret anymore, but somehow they still manage to achieve some level of mystique around the event. Guests are divided into groups of 40 and assigned a team leader you communicates information. The day before the event guests are told where their meeting place is. But even the team leader doesn’t know where the final destination for the event is until they receive the message around 8:30pm. 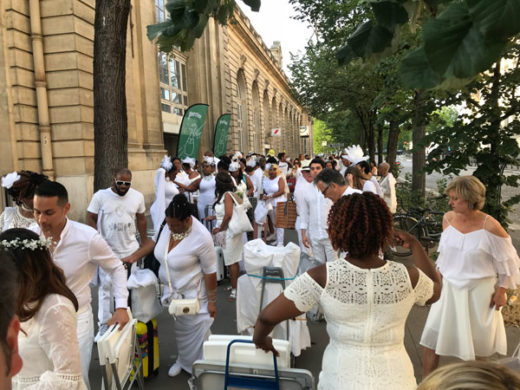 Our group meant in front of the Air France terminal along with another group. Pairs were assigned their table number as they arrived. We quickly started to make friends. 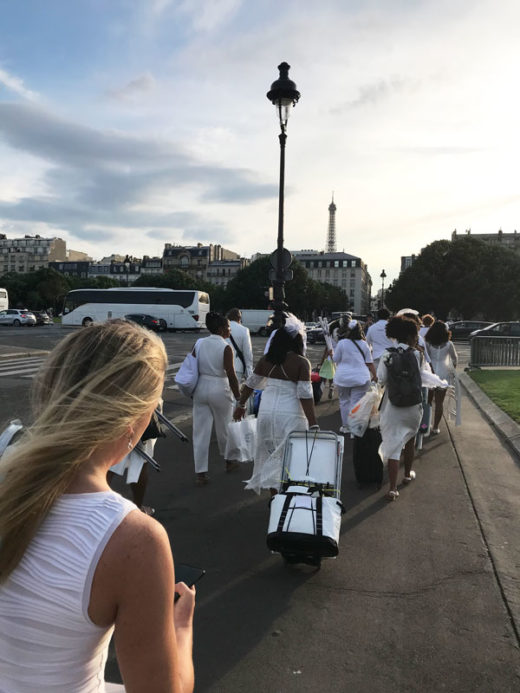 When the location was announced, we were on our way!

Mind you, this is all after traveling in the metro while carrying tables and (white) chairs along with real dishes, glasses, and whatever meal you plan to eat. As this is France, three courses is the minimum. 😉 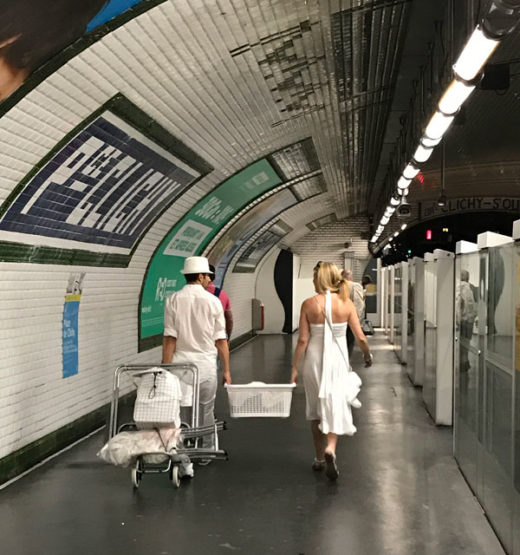 Traveling via metro is always entertaining, but it’s fun spotting people going to the dinner. I thought the laundry basket method was a clever touch.

As you approach the location you start to see more and more groups in all white. Some may seem far off, but before too long, the patches of grass nearby quickly disappear as new groups arrive and set up. Alas, the poor families who had hoped to have a calm picnic on a Sunday evening were in for a rude awakening! We quickly took over… Invalides. 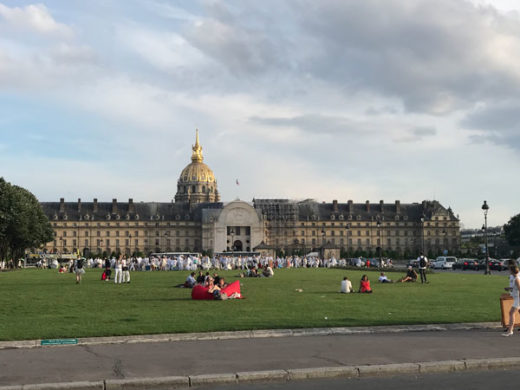 Invalides as we started to arrive, with people enjoying a beautiful Sunday evening. 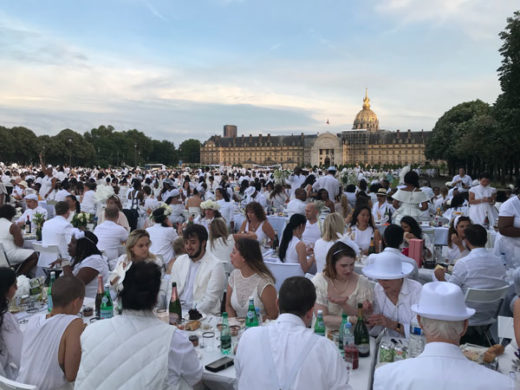 The dinner this year took over the entire esplanade between Invalides and the Seine, on both sides of the street!

Set up is quick and efficient. Before you know it, it seems that every table is suddenly outdoing the other with flowers, candles, and decoration. So many details across the board I wish I had thought of (including wearing a fascinator). In my defense I did have two giant bags with dinner. 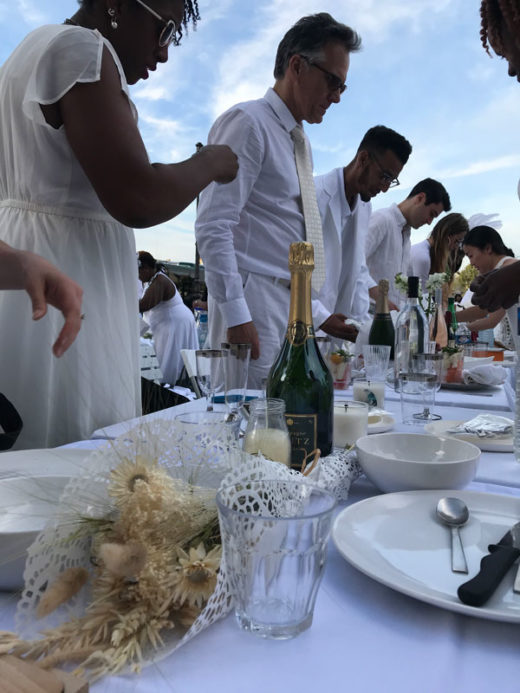 Everything you bring you have to take away when you leave too. At least bags are lighter once the champagne has been drunk!

Our table was made up of more foreigners than locals (one story I heard was the event really is a way to introduce new people to the city). We were surrounded by Americans who had flown in for the occasion, but one American couple came from Grenoble where they live. Another table removed, the women from Trinidad and Tobago and currently live in the UK. Further down there was a Frenchman, and many more. I admit on my way I feared it’d be a slightly snooty event of high class locals. I was pleasantly surprised that it was one of the more diverse events I’ve attended in Paris — refreshing! Paris isn’t a city where I find myself talking to strangers much, but I loved the event, and how we befriended everyone around us. Several people had attended the event in different cities around the world too. This night proved to be their favorite. 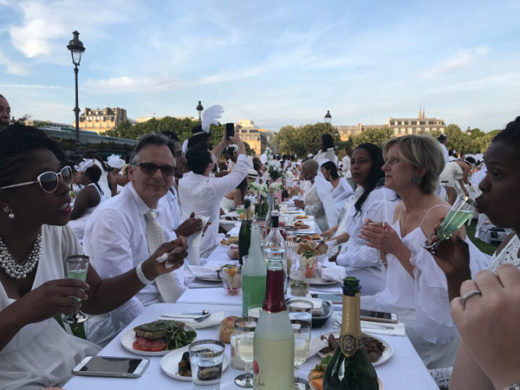 I’ve never seen a dinner party come together so fast! 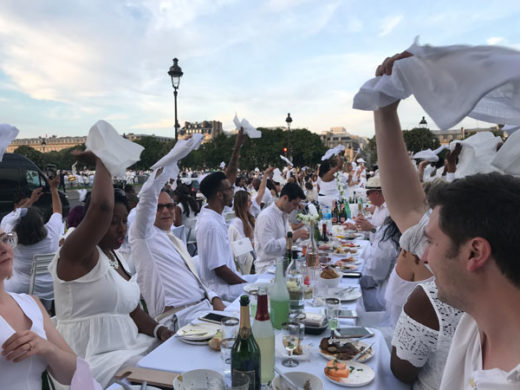 To officially kick off the dinner, there was the napkin twirl (something I first encountered at French weddings; I also had specifically gone in search of white cloth napkins the day before!). We were also given bubbles which we forgot to use before it got dark. And then there were sparklers, which lit up the entire esplanade in front of Invalides! It was magical. 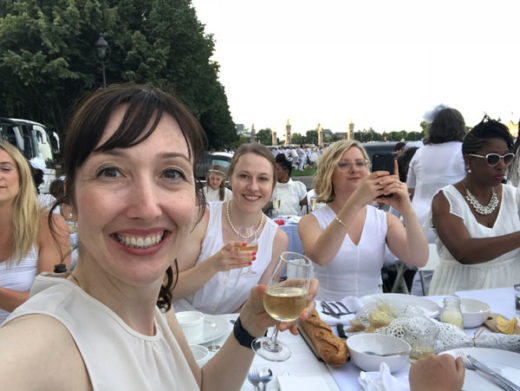 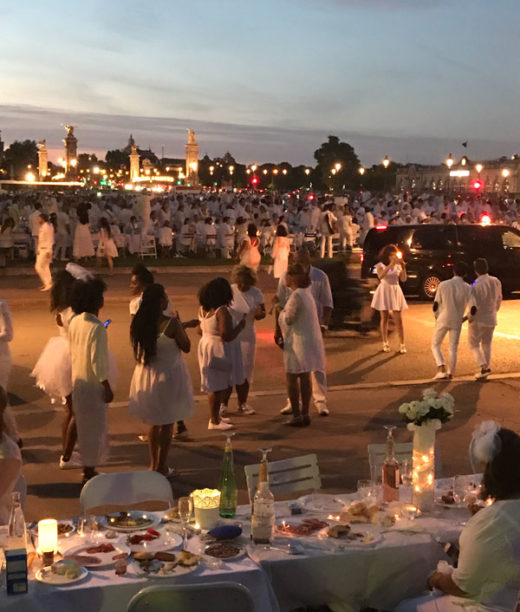 My ticket came to me by my friend Jen. We represented the “local” contingent of our section. At some point we realized many of our neighbors had disappeared. Clearly the Americans weren’t used to the long, leisurely meals we’ve become so accustomed to in France! 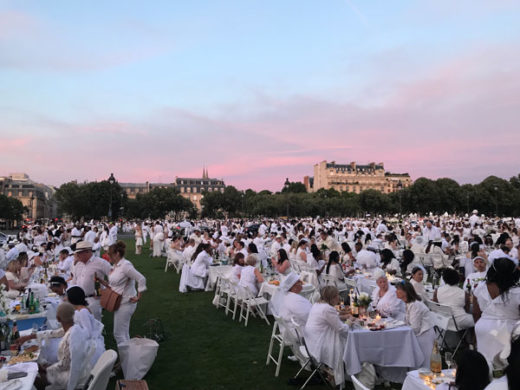 Throughout the night bands showed up, there were incredible costumes, and many guests had considered how they—and their tables—would light up at night. 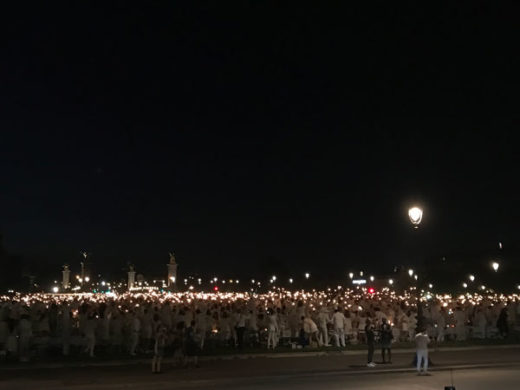 The dinner lit up with sparklers! ✨ 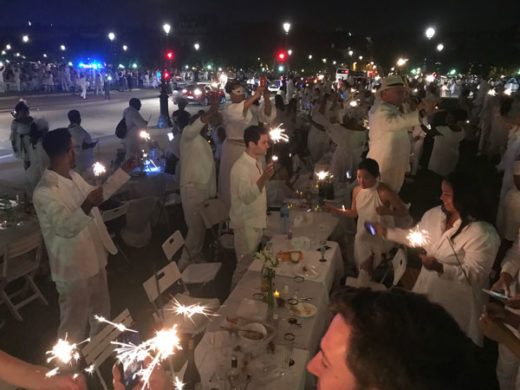 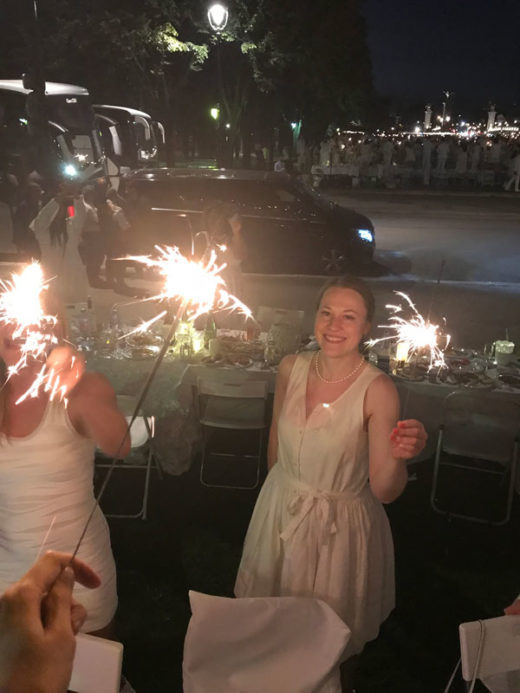 The biggest downside? The complete lack of bathrooms—a trend I encounter in everyday life in France!

Eventually the party took to the streets, which had been blocked off by the police. Amusingly, there was an NYPD cop car on the scene too! Not quite sure how that got here 🤔 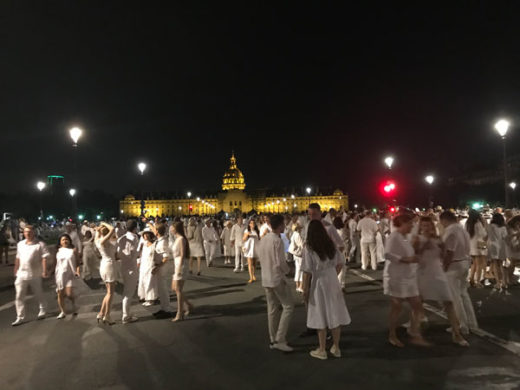 The pictures can’t quite capture everything. For me it was the perfect excuse to be outside, and enjoy the company of friends, both old and new. Also, the nine years of being patient really paid off! I never thought this day would actually come… 🍾 🥂 ☺