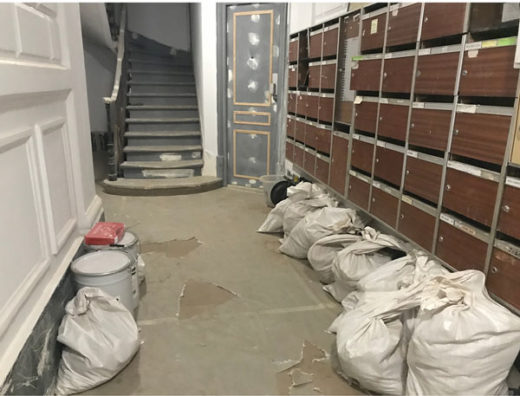 Imagine you live in Paris (maybe you do). You’ve heard from your landlords that they’ve voted to redo the hallway (quite frankly, it kind of needs it). The schedule goes up in June with the construction calendar. It’s supposed to be done a month later. The initial demo work even puts them AHEAD of schedule! Except it’s now more than 6 months later, and almost “done”.

In the world we live in we’re eager for speed and efficiency, but life doesn’t always work like we plan. Instead, the never ending renovation of my hallway gave me a new attitude to live by: this is progress. It’s a lesson that France teaches you over and over. Things will happen on their own time. I naively thought I’d post this to announce the finished hallway, but now 7 months in, I thought it’d would be appropriate to post it now, given the reality that it may never be done. 😜 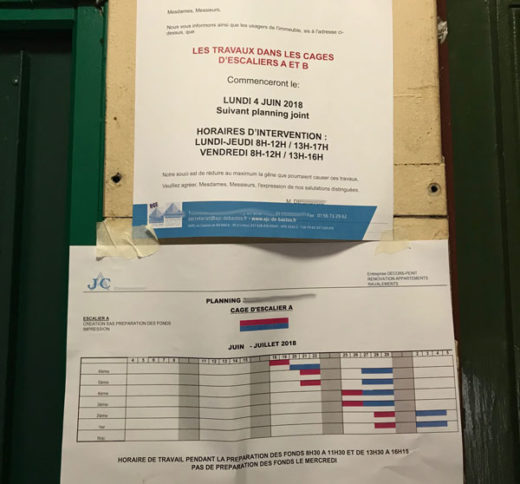 The initial timeline that was posted in early June 2018.

Going into any endeavor we often underestimate how much time it will take. The entire job was scheduled to be completed by July 4th. I didn’t start sharing images on my Instagram Stories until a couple weeks after the work started because quite frankly I thought it was going to be quick and easy, and the workers were already ahead of schedule with the demo. I was definitely celebrating too early. 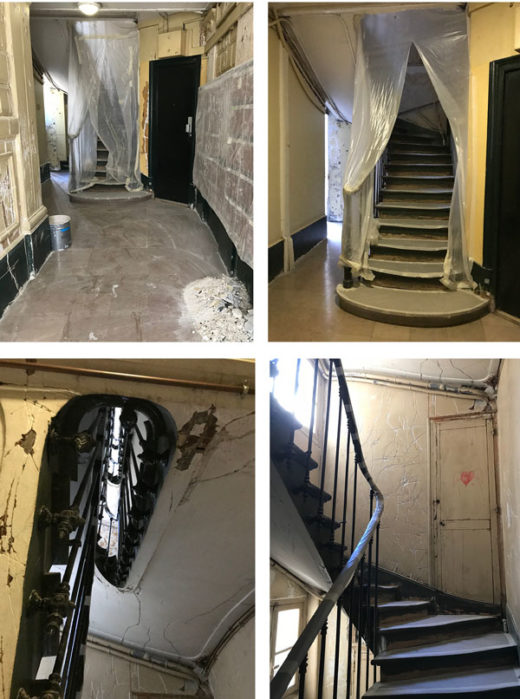 I’m not sure if I have a proper “before” of the hallway, but here are some views of early demo where they “Wolverined” the walls. The walls were a dirty yellow, and doors were green. It got dusty fast.

Then a few weeks into work when things slowed, I started sharing it on Instagram Stories. People who follow me seemed to get a kick out of it, from when the giant “hole” appeared in the wall, having opinions on the color they chose for the doors, to how they painted the floors with people living there. 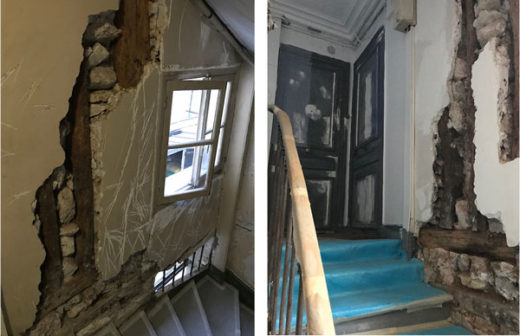 The moment when things started to go downhill. Giant chunks of wall were removed on multiple floors. You can see how old this building really is with the beams and rocks.

I think the workers think I’m crazy having documented the whole thing. (I just fear they think I’m the one who ratted out the building to city hall, when in fact I was just trying to entertain the people of Instagram 😂.) In the defense of the workers, apparently they found some structural issues along the way that threw a wrench in things. I believe in August we learned things wouldn’t be done until January.

Colors were tested on doors starting in July, and stayed like that until September or October.

For me, living through this renovation has been a distinctly French experience. Others have chimed in that their renovations in Paris have taken over a year. It all puts things into perspective and makes you realize it’s a miracle anything gets done. And I’m not alone in this experience. 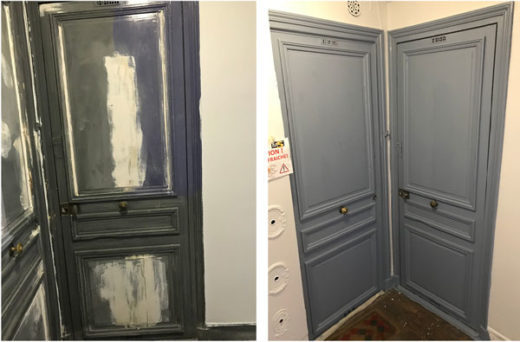 With every step forward, there was one back. The “polka dot” wood glue phase lasted for awhile before the final door color was painted one day!

It’s now early February, and we’re still awaiting mailboxes. (We did get new windows though!). In the meantime, the old mailboxes propped up on big paint cans still work. Something is better than nothing. This is progress. This is France. 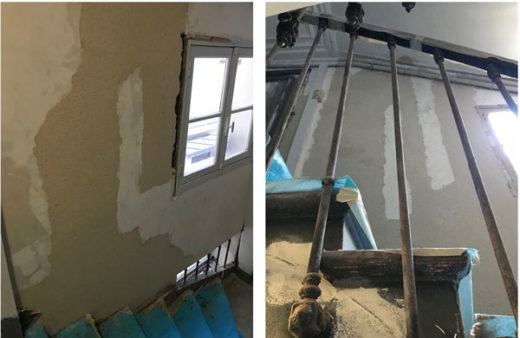 One day the hole was filled!

I think of my mom’s saying in these times: “I worry about what I have control over, I don’t worry about what I have no control over.” Business coach Marie Forleo always says “progress over perfection.” I do think there are some good life lessons tied up in this renovation, and some reality checks for everyone who thinks living in Paris evades you from the realities of everyday life. 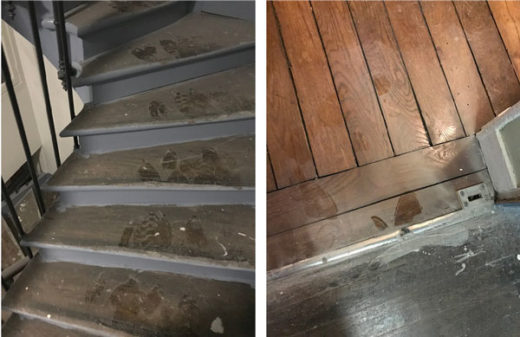 6+ months of dust was a reality.

The other thing to keep in mind is that when you’re in it, sometimes all the forward progress doesn’t feel as significant because it’s sloooowwwww going. It really does add up. Because this process has been so long, I hardly remember what the hallway looked like before. It took my friend (who also happens to be my landlord) coming over to really realize how much better the new and improved hallway is. I got lost in process than I kind of forgot about the actual progress. In her words “It was SO gross before, this is amazing.” Having an outside perspective always helps. 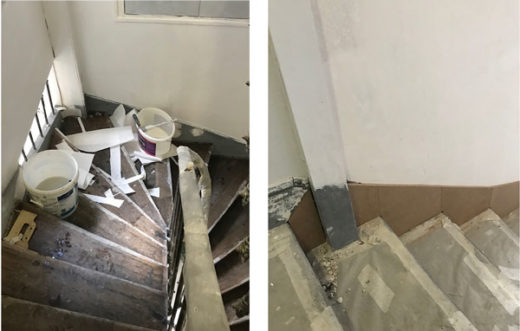 Finishing touches involved adding texture to the wall (like a white roll of wallpaper) and replacing floorplates.

There was even more dust when they sanded the floors.

Once the stairs were sanded, they were stained every other stair.

One last tip: 6+ months of dust really can add up. I highly recommend a can of WD-40 to make sure you can properly close your door again. A simple fix that goes a long way. (Also, YouTube all the awesome things you can do with WD-40 😉.)

Here’s the “after”. We’re still awaiting new mailboxes, so the old ones are propped up with paint cans on the opposite wall. Anyone taking bets when the new ones will be installed!?!

P.S. Sign up for my newsletter “Connect the dots” where I share stories, resources, and insights that never make it onto the blog.

French lessons: une palmeThe other side of Prêt à Voyager