{Recently I got asked this question on Instagram. As much as possible, I prefer to respond in a way many people can benefit from the response. Shoot me an email if to ask more questions I can answer in this series!} 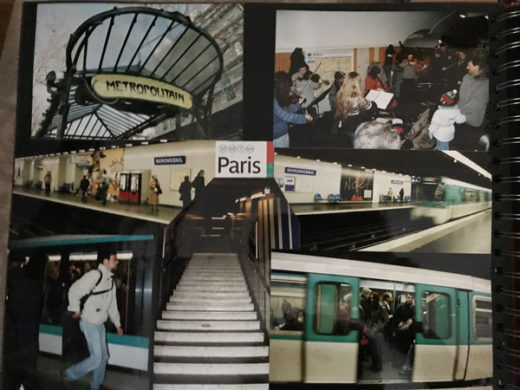 CHAPTER 1 – Study abroad (undergrad)
My love affair with Paris has been a long one. I first studied in Paris in 2001—aka a LONG time ago. It’s been awhile, but I’ll do my best to channel what I remember.

I selected a study abroad program because it seemed like the right fit for me. I liked the approach and it seemed the perfect fit for the art history side of my major. It involved taking French classes, but the whole program wasn’t in French. I also kind of liked the idea doing a program which was made up of students from different schools rather than going with my own (which my school didn’t offer Paris so it was an non-issue).

I did the Wells College Program for the Arts, which sadly no longer exists. My classes typically met in my professors homes before going out into the world to see what we were studying (French gardens, impressionism, photography). I had a class that met every Wednesday that met in the Louvre, and in 3.5 months I still didn’t see it all. My program even gave us the opportunity to try other things — so I took hip hop dance classes, in French. The entire approach had a huge impact on the work I do today!

In terms of living, the perk of a study abroad program is that they already had a network set up. I did a home stay in the 8th arrondissement with an older woman who rented rooms. She had a housekeeper who’d prepare our dinner 2x a week, and we’d eat with our host mother.

This was 2001 so there was no internet, but I’d hit up the internet café a couple times a week. Somehow we managed to keep busy or I’d chat with my roommate who had an adjoined room. We all had EuroRail tickets so more often than not weekends were spent traveling around France, or Europe. It was great for seeing places, but less great for becoming immersed in French culture.

The perk of being on a study abroad program is that you have built in friends. I saw it as a great excuse to branch out a bit, and didn’t know anyone going into the program (part of the adventure). I ended up meeting one of my dearest friends to this day, so it all worked out. We had so many adventures, mundane more than grand, that we still laugh about to this day. 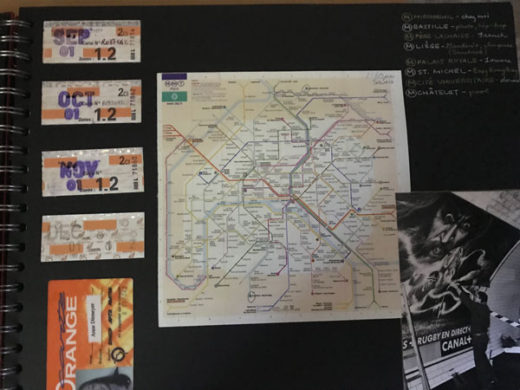 This experience is a bit more daunting because you’re on your own to find housing. Let’s face it, it’s not fun for French people to find an apartment. I ended up having a roommate and sharing a ~30m2 apartment where we kept our clothes in the kitchen. We were young and could handle it. And we were in Paris.

The thing about making friends in Paris is that your net gradually grows as you go to parties or events. You never know who you may meet. I’ve had friends live in Paris and say they’re lonely, but I’ve always kept myself busy. I ended up interning for a publication that one of my study abroad teachers had written for, and I gave private English conversation classes on the side (20€ for an hour over coffee).

Teaching was 12 hours a week and we had 2 weeks of vacation every 6 weeks (hellllooooo, France!). I think I learned a lot about the French way of working. It was awesome, but all the vacation also meant that many of the people I gave lessons to would also be away during school holidays, so I didn’t have that extra income (which you really need when you work 12 hours a week!). Paris wasn’t nearly as expensive back then as it is now, but I needed those odd jobs. Because I wasn’t traveling as much, I did have more time to explore Paris, and took total advantage of my teacher card that got me into museums for free.

Because it was a government position, we had everything we needed to get a carte de séjour, and even had French health insurance. I was fortunate to get placed at a school in a Paris suburb. My French would have gotten better had I been placed in small town France.

The majority of my friends at that time were fellow teaching assistants. Any French friends I had were adult French friends through various connections from home. 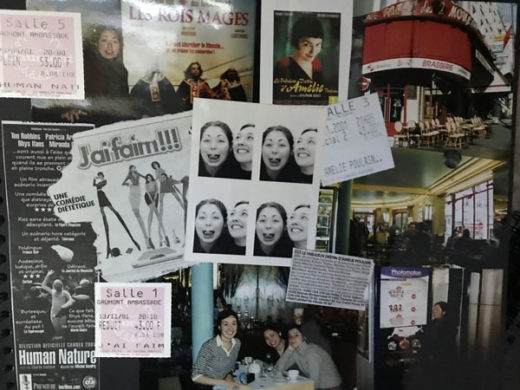 CHAPTER 3 – Grad school in Paris
By the time I moved back to Paris in 2009 for a Masters in Global Communication at the American University of Paris I already had several years of professional experience under my belt, and I’d started this blog (which to this day serves as my best business card). I’d been looking for a job not fully realizing how hard it’s to work in France when you’re not an EU citizen when I came across the program on the AUP website. Without knowing I was looking for it, it was the perfect fit for me. (I’d been wanting to incorporate travel and anthropology back into my work). Grad school was my ticket to my next professional pivot.

Going for school once again meant I had a built in group of friends. I ended up being drawn to those who also had previous professional experience, and ironically they ended up being the ones who were able to stay upon completing our studies. (The ways to stay are getting sponsored by a job (hard, and expensive, and you need to be high level enough), getting married, or starting your own business (my path, and I’ve shared many stories about how that’s not always easy). The challenge is having working rights.

I freelanced for Design*Sponge during grad school, a position I’d started doing in Baltimore a few years prior. I only took on loans for tuition, and had saved enough for cost of living. (I also lived in tiny apartments). Thanks to my freelance work I had featured a few French creative types, who ended up being some of my first French friends. I joke it took me 10 years to make real French friends, but it’s kind of true! My blog and Twitter (and later Instagram) also was a great tool to connect me to fellow expats living in France. It also opened up opportunities for me I’d never expect.

Finding an apartment became even more hellish after I graduated being freelance + foreign, but you know what they say: what doesn’t kill you, makes you stronger. Ha! It’s part of the adventure of navigating another city. Paper work is too, but it bonds you to others. That’s where it pays to have fellow expat friends, particularly ones in the same phase of the journey. (I’m not great at giving advice on moving, because I moved here almost 10 years ago).

Every time you live in Paris you have a LOT of visitors – sometimes so many you barely feel like you can settle into your own routine. Most people don’t talk about this openly, but it can be a lot when everyone is coming on vacation, and you’re just trying to go about life and can’t always splurge on everything).

I started learning French in high school, then again in college, but it’s different to actually use it in real life. Every time I lived in Paris my French has better, and much of that is accepting that I’ll make mistakes and not worry about feeling judged. It’s a big global city, so it is possible to get by not speaking much French, but for me the joy comes from the everyday exchanges. I’m the one who keeps conversations with my French friends in French.

My French would have gotten way better if I’d lived in another city in France. It’s too easy to default to English in this city between visitors, and friends who don’t speak French. If you really want to learn the language you have to take the initiative to learn. If I’d found a Frenchman that may have sped up my progress too ;) Now that I work alone, I’m considering hiring a tutor to help me perfect some of the nuance (particularly the art of French emails). In the meantime, my cinema pass is great for a dose of French and I always read the sub-titles when I see an English-language movie.

My friends who moved to Paris with families/kids had their own challenges finding friends — many people wouldn’t make the effort to befriend them knowing they were here temporarily. Many of my French friends are franco-american, well travelled, or have studied/lived abroad themselves, which gives them a better understanding of what it feels like to be the outsider. It can take some effort to crack into friends, but when it happens, it just works. I do find with the introduction of Facebook that it’s a bit easier to get in with the French (there are still TONS of mysteries to unlock).

I never dreamed of staying here when I came for grad school. I think the fact that I stayed open is where my biggest success came. I didn’t really ever think I’d become French either, but now that I have I’ve unlocked the door. For me, that means easing up on all my crazy paperwork and renewals at the Prefecture every year. (Don’t worry, I still have plenty of admin to keep me busy running my business). As a good friend says, “I know you love France, but you really love a challenge.” 😜 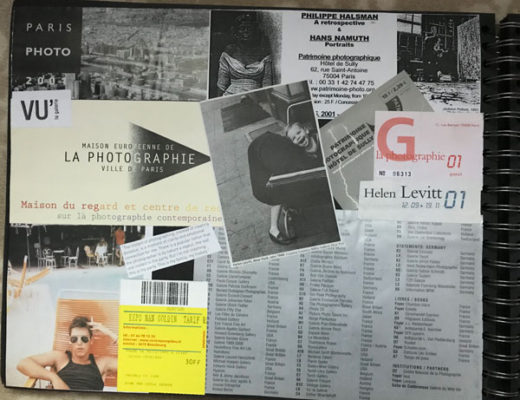 EPILOGUE
The things I love most about living in France are around being open to adventure, experiences, and understanding another culture. I try to approach it as a game and make it laughable, because there are days when it can bring you down. But there are more days that are magical. While I love French culture, I also love how international Paris is, and that I have friends from around the globe. I’ve learned about a lot of other places too. I continue to weave in and out of my worlds, school worlds, online worlds, offline worlds, communities I’ve been a part of. I know more people in Paris than anywhere else in the world, and I have to admit it can get overwhelming, and I can’t always keep up. Instead I hermit up in my apartment, but that’s OK too because this is home.

Wherever you are in the world, it’s about rolling with the punches and making it work for you. Sometimes that means getting out of your comfort zone and trying something new. As someone who moved a lot when I was growing up, I know that there’s always an adjustment period in a new place. Change takes time and not everything will be instantly perfect or what you expect.  Paris is amazing, but there are also so many other great places to consider. Be open to any and all opportunities. 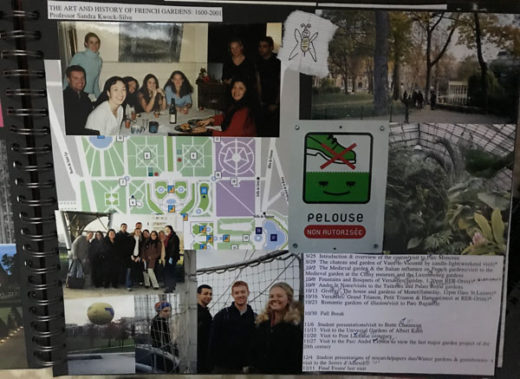 So this is my take. What was your experience studying abroad—in Paris or elsewhere. I’d love to gather different perspectives for anyone considering going abroad. Did it meet your expectations? Were there any surprises? Regrets? Amazing outcomes?

Visuals are pages from my 2001 study abroad scrapbook.

I’ve also written about studying abroad on Medium. For more Paris guidance check out the visit Paris and life in France pages of this blog. I also offer different experiences through NavigateParis.com.

Hack the MoonHow to Pack Light