One Giant Leap – 50 years after the Apollo moon landing 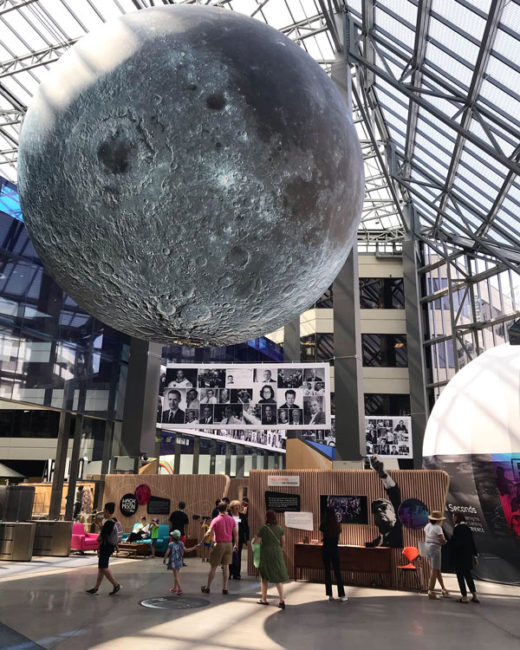 A week ago today I found myself standing under a giant moon celebrating the 50th anniversary of the Apollo moon landing. As someone born after 1969 I don’t think I fully realized the impact the event had on the world. Apollo had always been on my radar growing up, as my grandfather was involved. I knew he was the “father of inertial navigation” and had worked on the Apollo missions, but until recently I wasn’t fully aware what that entailed. I used the occasion as my excuse to travel stateside and kick off my summer travels. In the process I felt like I was able to time travel! 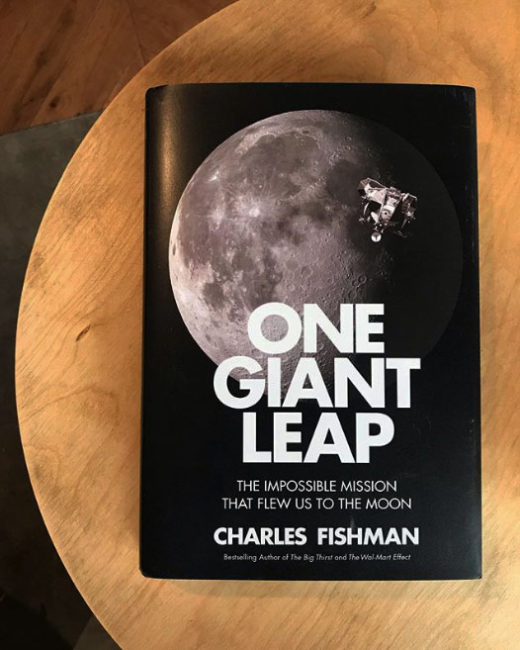 My interest in Apollo was further sparked by a chance encounter with Charles Fishman on Twitter while he was finishing up One Giant Leap: the impossible mission that flew us to the moon that helped open my eyes and started me down my own rabbit hole of discovery to learn more about my grandfather who had died when I was quite young (I mean, he was born in 1901!). 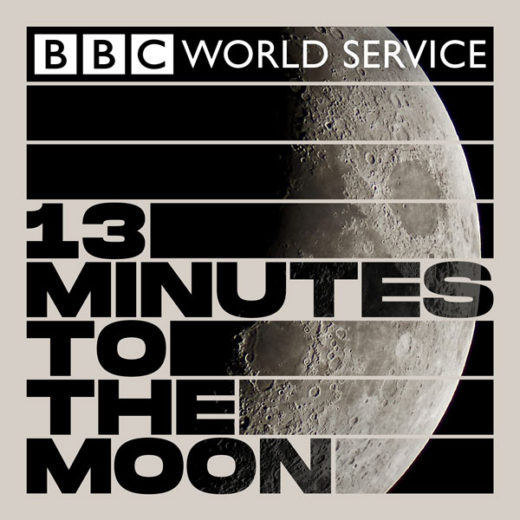 Then I discovered the BBC podcast 13 Minutes to the Moon that covers the last 13 minutes leading up to the actual moon landing. It’s absolutely captivating to listen to actual footage, and thoughts from those who worked behind the scenes. The entire thing is scored by Hans Zimmer and sucks you in. (Episode 5 “the fourth astronaut” even features my grandfather!). 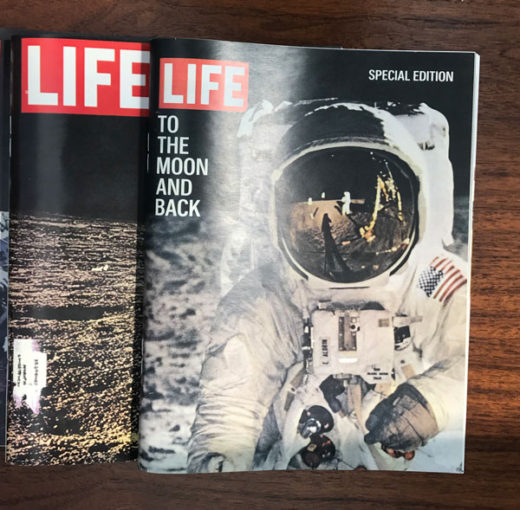 Apollo 11 landed on the moon on July 20, 1969 with astronauts Neil Armstrong and Buzz Aldrin. Meanwhile, Michael Collins was the 3rd astronaut who remained in orbit and got the three of them home. 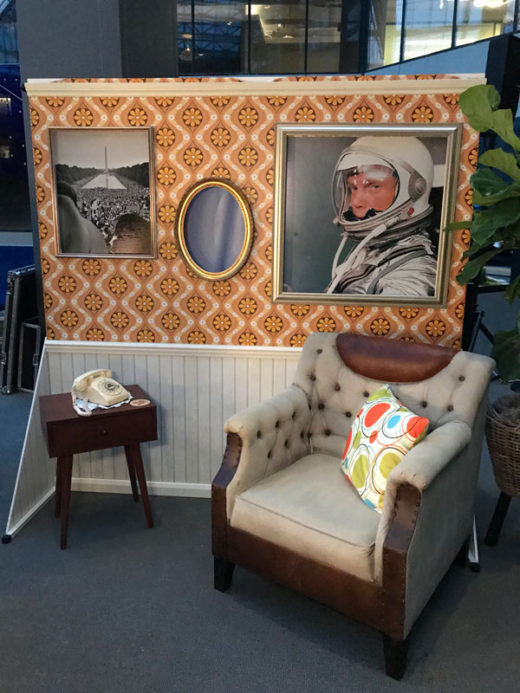 I celebrated Apollo 50 at Draper, the lab named after my grandfather in Boston, Massachusetts. The entire atrium was converted into a 1960s style living room… 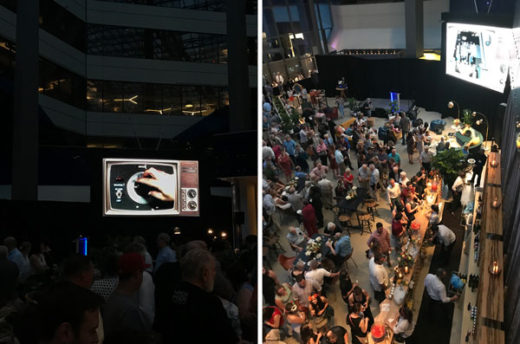 …complete with giant TV and retro bars, and glassware to match. 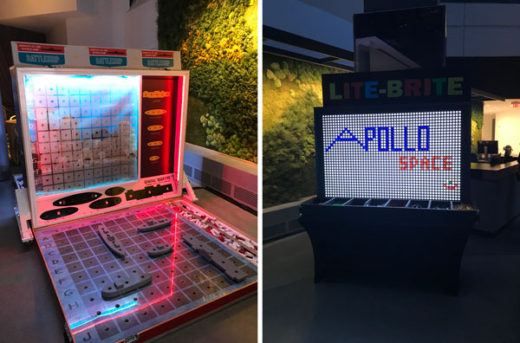 There were signs of the time, including a giant game of Battle Ship and Lite-Brite. 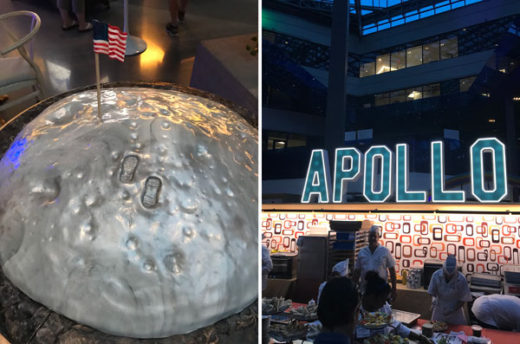 There was a fun moon cake, and retro-style kitchen. 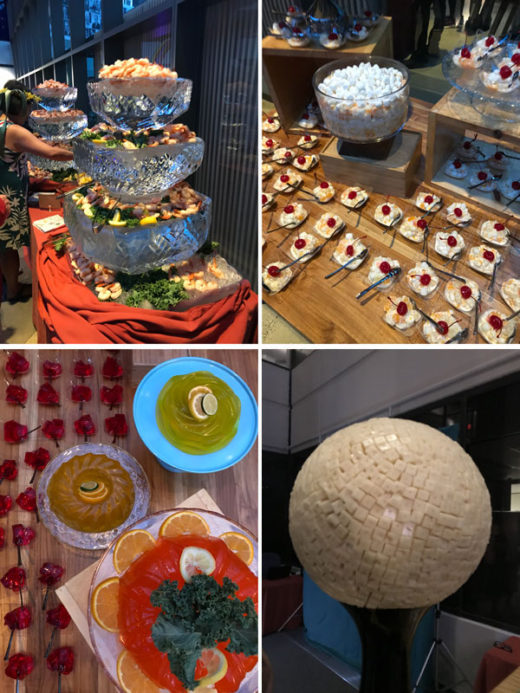 1960s inspired food included marshmallow desserts, shrimp in an ice sculpture, jello, and a moon made of cubes of cheese!! 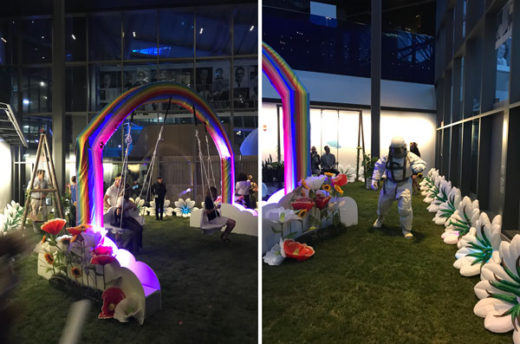 Flower power! 1960s vibes with cloud swings under a rainbow, and an astronaut making his rounds. Guests even could make flower crowns. 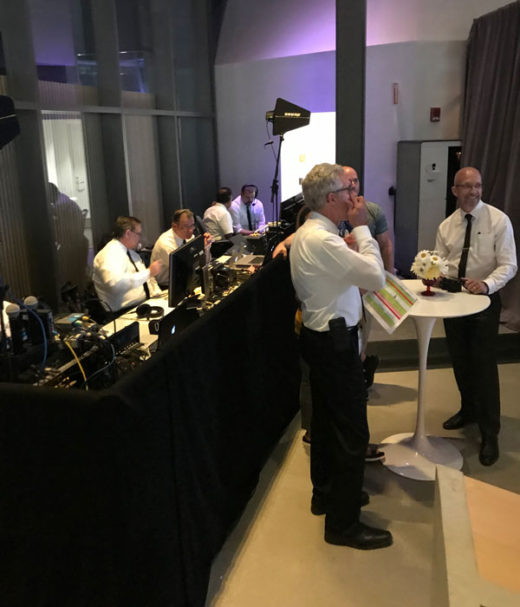 I enjoyed that the entire tech team dressed in white shirts with thin ties like Mission Control. 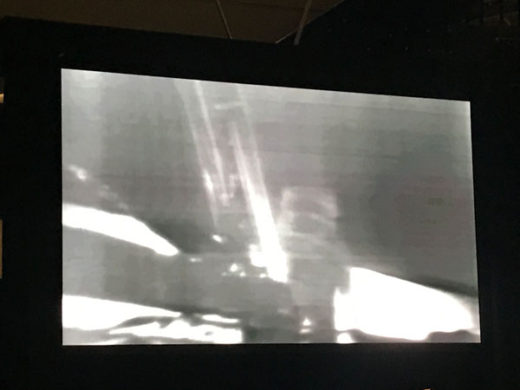 Throughout the evening we watched CBS news coverage clips on a giant “TV”. You can watch the full coverage on YouTube. 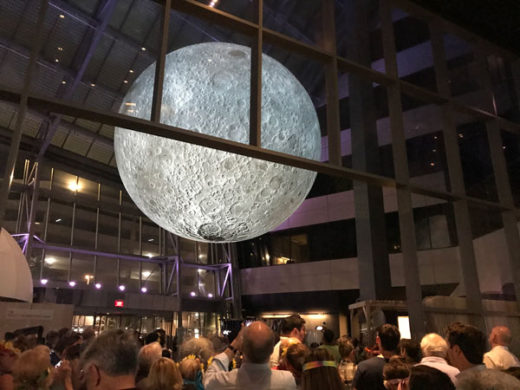 The moon in the entry was lit a little before 11pm after the first steps on the moon. 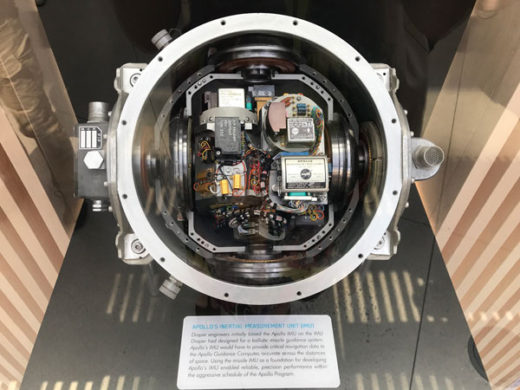 While the party is over, the free exhibition is on at Draper in Boston until October. You can also check out the impressive Hack the Moon website which tells the stories of how the moon landing was possible. Navigating without gravity is a whole other challenge. Gyroscopes helped make it possible. 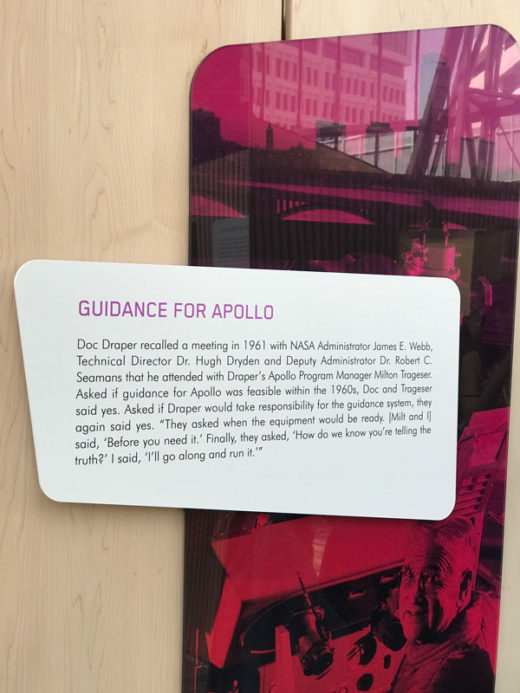 Draper is named after my grandfather, Charles Stark Draper. At the time of Apollo, he was the head of the MIT Instrumentation Lab, which later divested, and became Draper Lab. He spearheaded the guidance and navigation systems, made possible with an incredible team of people he worked with. 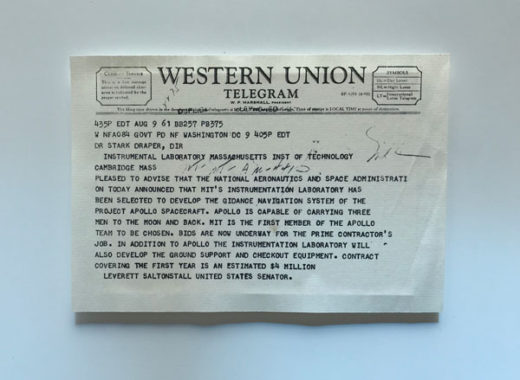 Unlike contracts of today, my grandfather’s lab was awarded the first Apollo contract that was the side of a telegram. 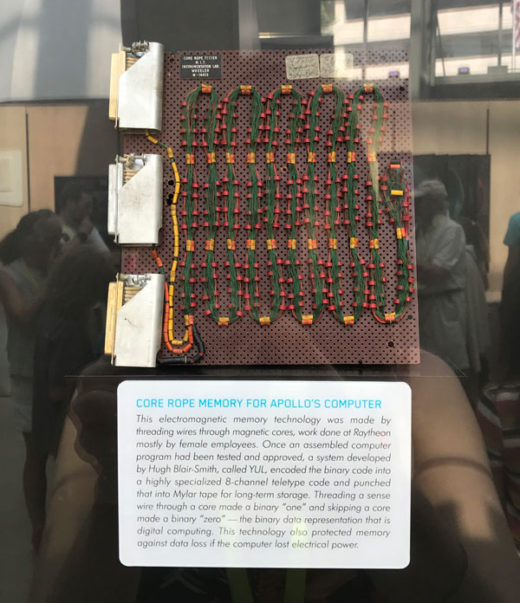 Core Rope Memory was woven together by LOL (Little Old Ladies). It’s how they were able to get the computing system tight enough and light enough to get to the moon. The Apollo missions not only got us to the moon, they had a lasting impact on the technology we use today. 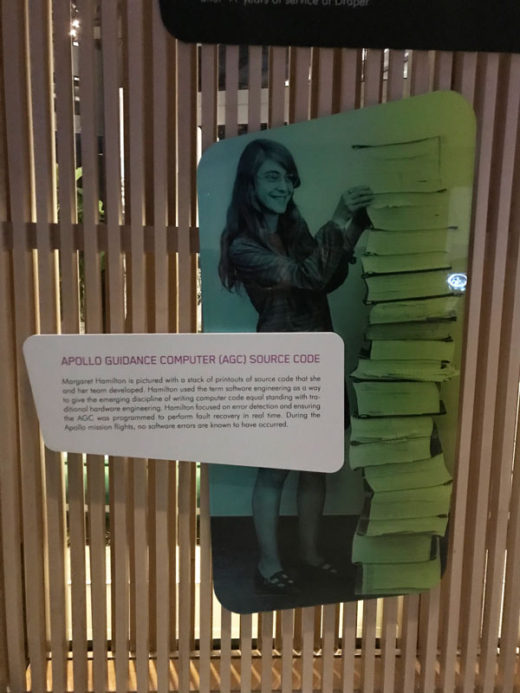 The amazing thing about all the Apollonauts I met was how down to earth they were. (Margaret Hamilton included.). It became to clear to me that everyone realized they were part of a team working towards something so much bigger, and they couldn’t get there alone. 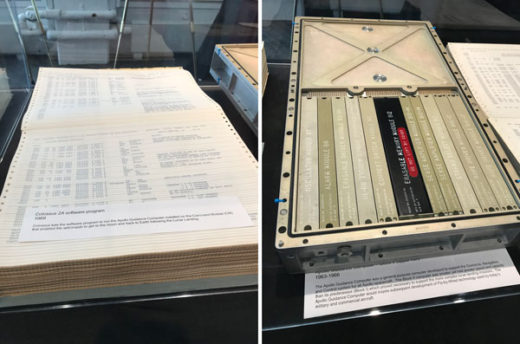 Additional artefacts at the MIT Museum. On the left is code, and on the right the Apollo computer. At the time most computers took off entire rooms! This was the first of its kind.

They got to the moon with a computer that worked with less memory than what is needed to send a single email today. Apollo created foundations for so much of the technology we use today in a way that had never been done before.

I know there are skeptics out there about the moon landing and the sheer cost of it. It’s important to remember hundreds of thousands of people were employed across all 50 states with Apollo contacts. In a tenuous time around the Vietnam War, it turned out the moon landing not only was able to bring together Americans, but the entire world, as people watched live on television. In the strange times we live in, I don’t think the power of bringing people together can be underestimated.

Charles Fishman lays it all out in One Giant Leap (and series of 50 articles for FastCompany, where I even learned that my grandfather volunteered to be an astronaut—at the age of 60!). Fishman provides the context which allowed for the impossible to happen. For me, I have a feeling it’s only the tip of where my curiosity will take me.

Whether you travel to the moon, or to a nearby neighborhood, I believe travel gives us the perspective to better understand ourselves, and others. The moon mission was an extraordinary example of what is possible when people work together.

Were you alive during the Moon landing? 🌚 I’d love to hear your story in the comments. Where did you watch it? How did it make you feel?

Sign up for my ‘Connect the Dots’ newsletter to get snippets of what makes me curious each week.

Time traveling at the TWA Hotel12 years of blogging: How I lost — and found — my voice