A journey up Mount Washington, via Dog Mountain 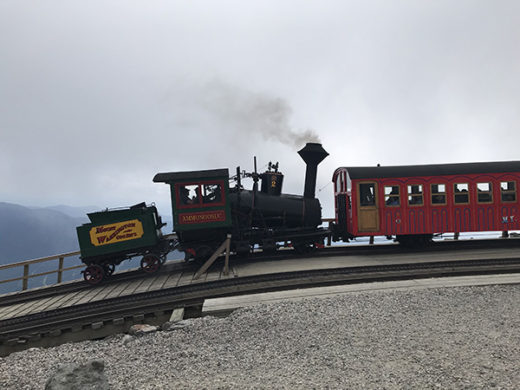 This year the Mount Washington Cog Railway celebrated its 150th anniversary. It also provided the perfect excuse for a less traditional family reunion this past summer. Anyone who has been following this blog for awhile knows that my dad is quite the train connoisseur. I have memories of riding the cog railway as a kid, but this time my aunts wanted to get in on the action. It was such a fun adventure I couldn’t help but share it. (Finally.)

Especially in summer, railway tickets were a hot item, so my aunt had the foresight to buy tickets in advance. It’s always been my dream to stay at the Mount Washington Hotel since first seeing it as a kid, but it turns out staying there was even more popular—and expensive—than riding the railroad. Rooms were fully booked, but we played it right and stayed at an inn about 20 minutes away, and headed to the Mount Washington Hotel for a drink. 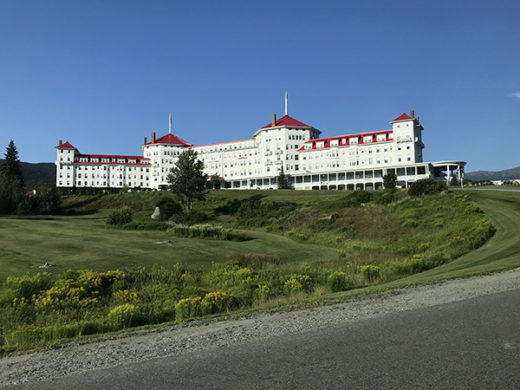 There aren’t many places that I visited as a kid that are etched in my head like the Mount Washington Inn. My memories were foggy, but it made an impression on me and made me feel something. If I could travel back in time to “Mad Men,” I felt like I was walking through another era when travel was slow and full of style. It was like nothing I’d seen before. Grand, classic, and the people seemed down to earth yet enjoying a certain carefree joie de vivre. Something out of the movies.

Mount Washington Hotel is located in Bretton Woods, New Hampshire. Summer is for chill family time by the pool and hikes, while winter is ski season. 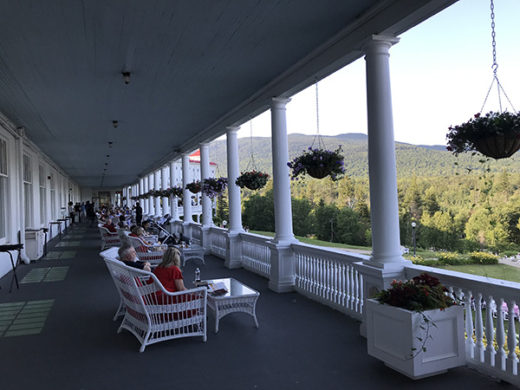 From the back side of the Mount Washington Hotel you have a view of the railway on a clear day while sitting on the veranda. It’s a nice life, even if you’re just stopping by for an afternoon. 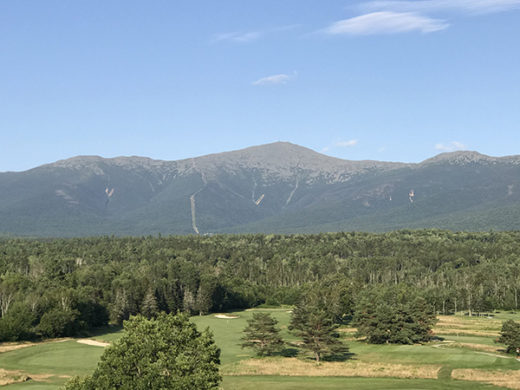 Fun fact: the hotel is also home to the room where the articles of the International Monetary Fund were signed in 1944. You can visit it on the ground floor of the hotel. 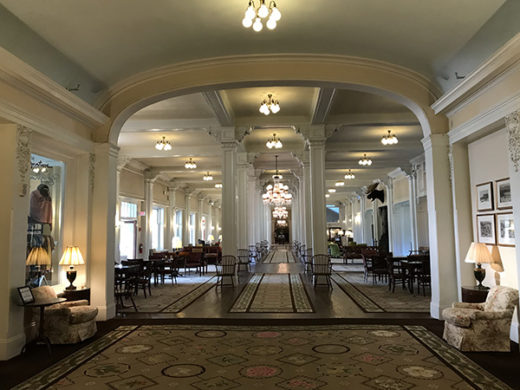 The hotel was fancier than we needed for dinner, so headed to Littleton for dinner at Shilling Beer Co. Such a cute town that I’d love to explore more of! The next morning it was railway time. 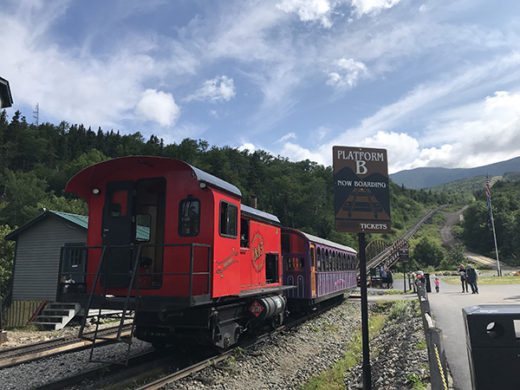 The Cog Railway comes with timed entry and the option to ride one of the original steam trains, or the new bio-diesel ones. We did the latter as we wanted a morning slot, but didn’t feel like we needed to get up extra early while on holiday. We’re lucky we went when we did because we had a rare clear day all the way to the top. 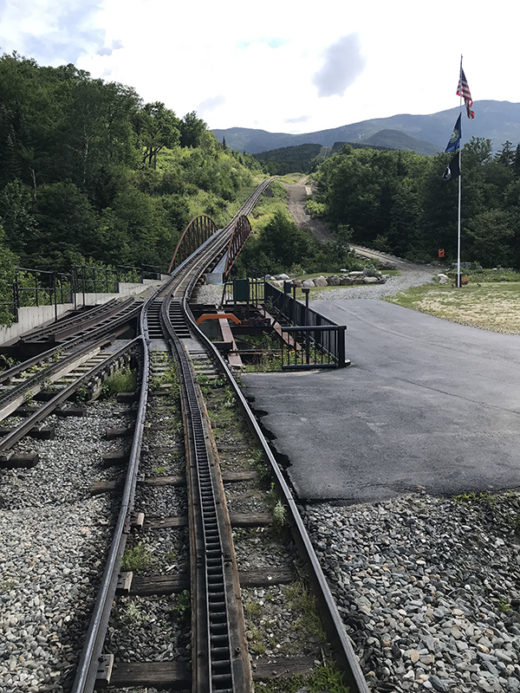 The cog takes about an hour to get up the mountain as the locomotive pushes it cog by cog. Then on the way down the locomotive is what guides the way. Along the way you go through some steep passes and it feels as if you’re suspended over the mountain, which is even more surreal knowing this was dreamed up over 150 years ago! The views are impressive. If you’re really lucky you get an awesome brakeman (they’re all good, but we had a particularly great one on the way up). 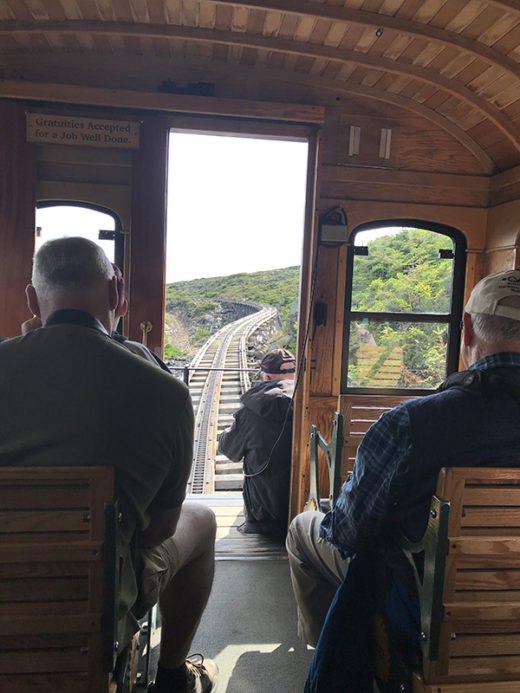 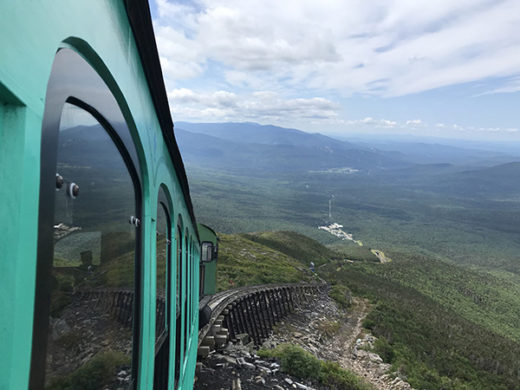 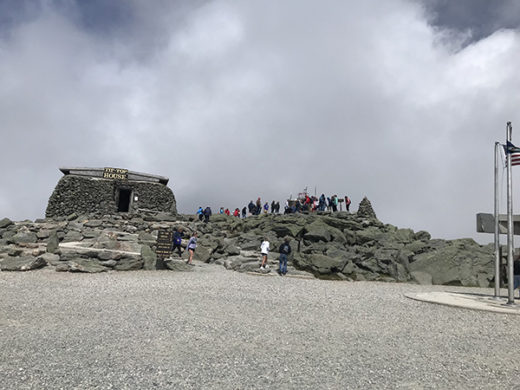 Once at the top of the mountain you have one hour to explore. You can visit the highest peek, and the site of the original hotel (talk about no frills). Our ride up the mountain was perfectly clear, but by the time we got to the top the clouds and weather started to blow in. To avoid getting blown away we hit up the visitors center. I highly recommend a hot chocolate. It’s not that it’s the best hot chocolate in the world, but it’s the perfect thing to warm you up! 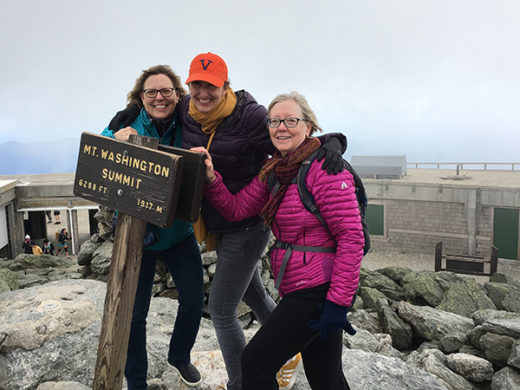 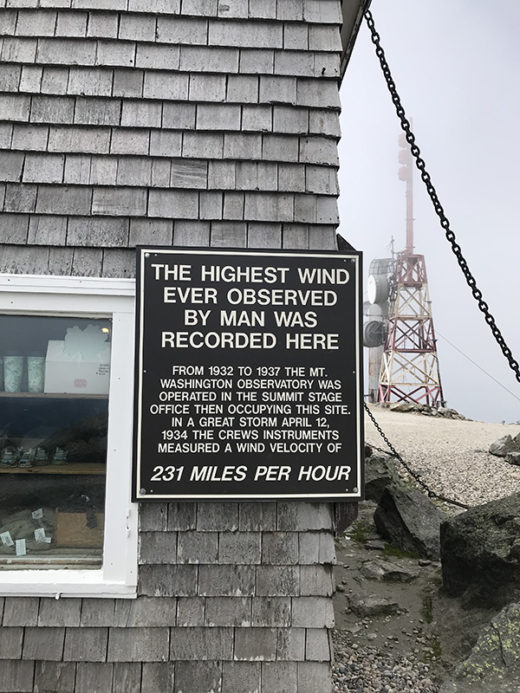 The railway had warned us it was cold at the top of the mountain, but thankfully my aunt took that to heart and made sure we had plenty of layers, including gloves, because it really was (even in August!). SOOOO windy too! 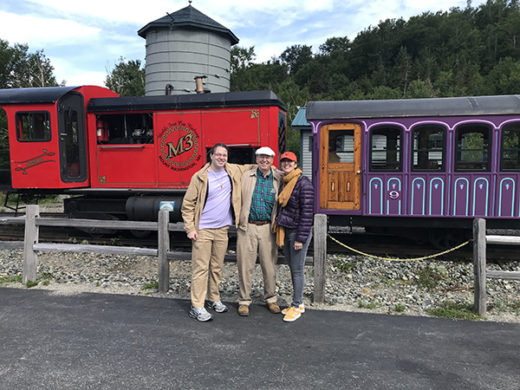 Back in the car and at the bottom of the hill we stopped for lunch at Fabyans Station, what was an old train station. After all that wind we were ready for some food. Turns out the restaurant is now owned by Omni, the same group that owns the Mount Washington Hotel. Lunch was not fancy, but yummy and “hit the spot” as we recounted tales of our adventures up the cog railway. 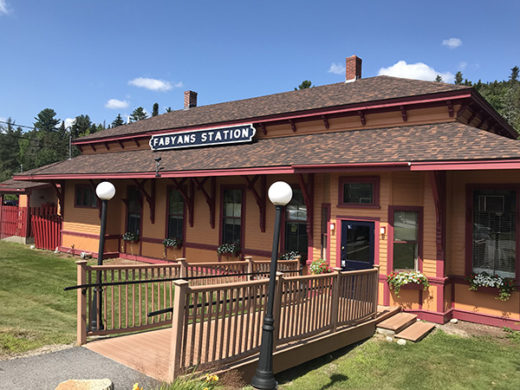 The amazing thing about rural New England to me was all the trees, and lack of traffic. It was such a pleasant reminder of what it’s like to not live in a big city.

While not at all connected to Mount Washington, I couldn’t help but share one other detour we took on our way to the mountain. One of my aunts lives in Vermont (just a couple hours away). She knew by brother and I had never been to Dog Mountain, so we took a quick stop there. 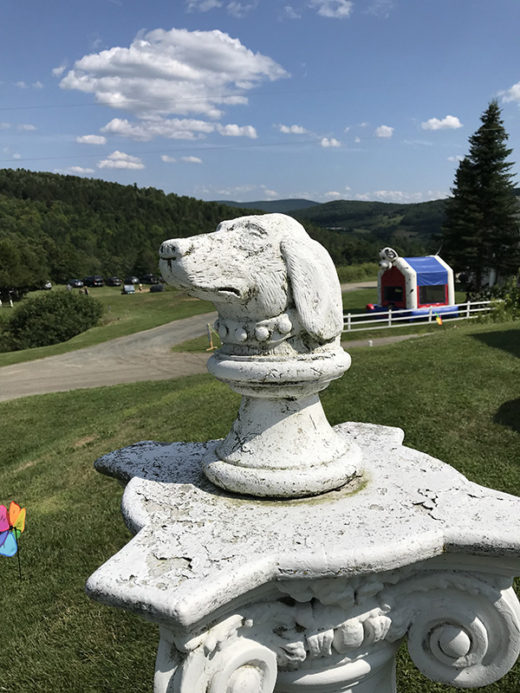 Dog Mountain is home to the “Dog Chapel” a place where you can pay your respects to your furry friends (dogs of course are welcome). Dog Mountain was dreamed up by artist Stephen Huneck who is known for his carved sculptures and woodblock prints all about dogs. It was a vision that came to him after a near death experience. 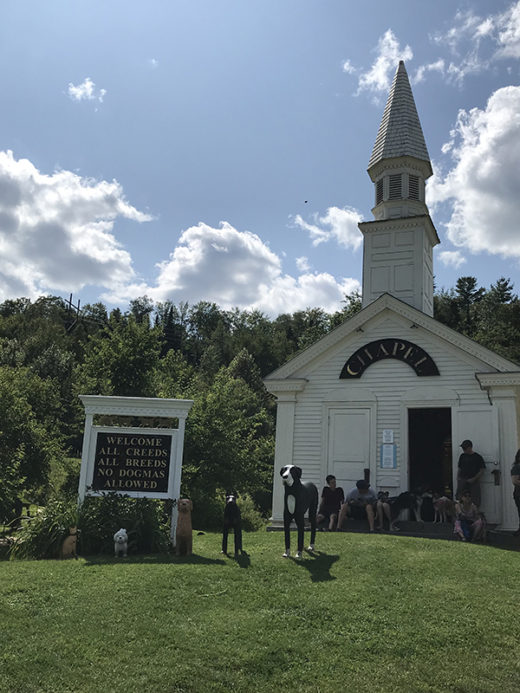 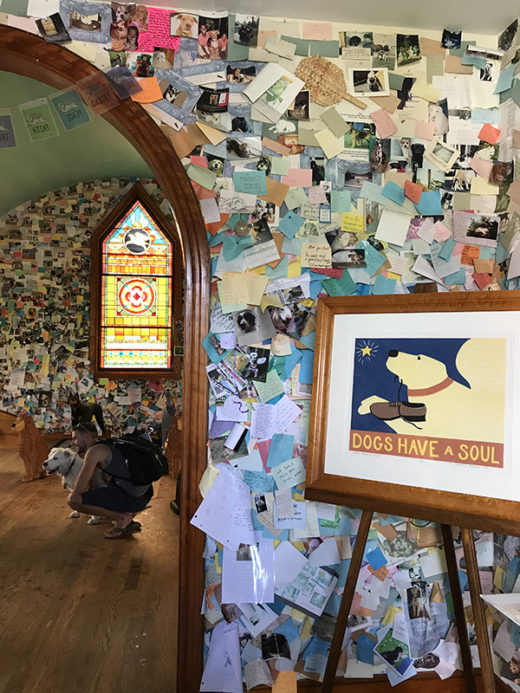 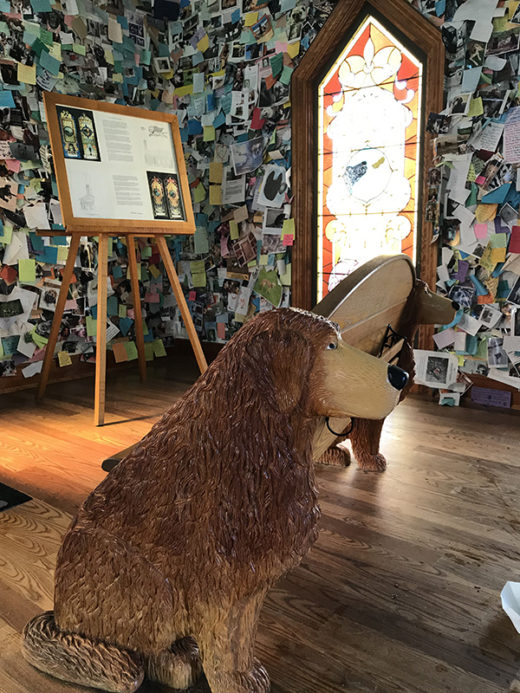 Despite all the fun and joyfulness in his work, Huneck battled with depression and took his own life in 2010. His wife followed in 2013. Despite the dark twist to the story, a non-profit organization has taken over the chapel and gift shop to let his legacy live on through the sale of his work. (You can also shop online.) The day we were there a “Dog Party” fundraiser was going on with live music, a dalmatian moon bounce, and lots of dogs. Its a fun stop for dog lovers. 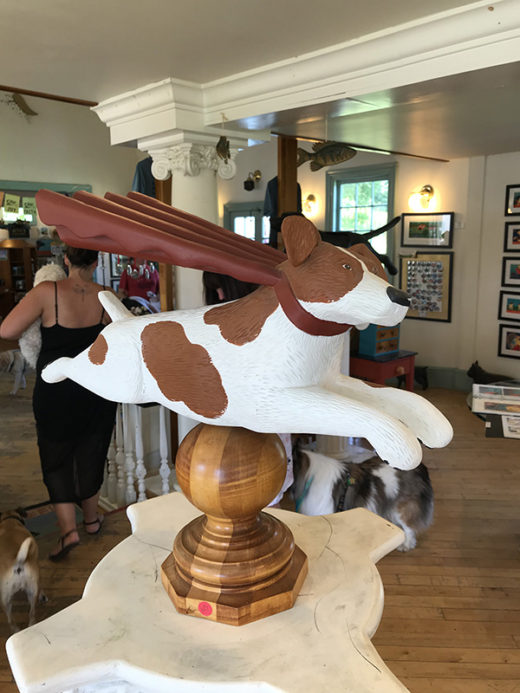 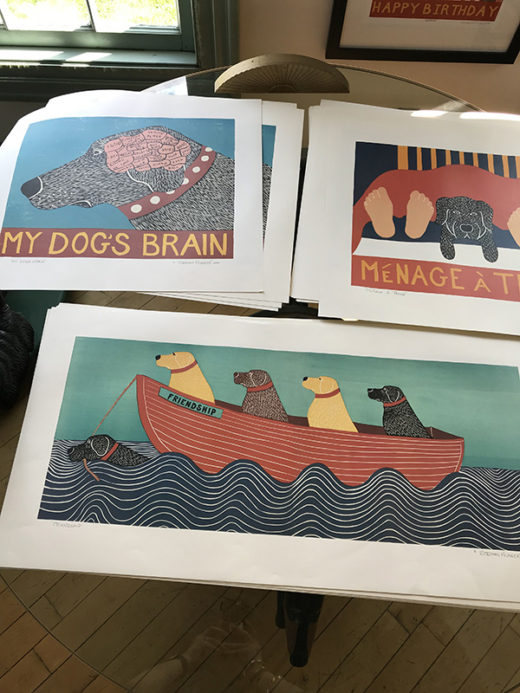 While you’re in Vermont, you may as well stop for a creemee (maple flavor to be exact!). I don’t know why it took me this long into life to have one, but I won’t go to Vermont from now on without getting one! 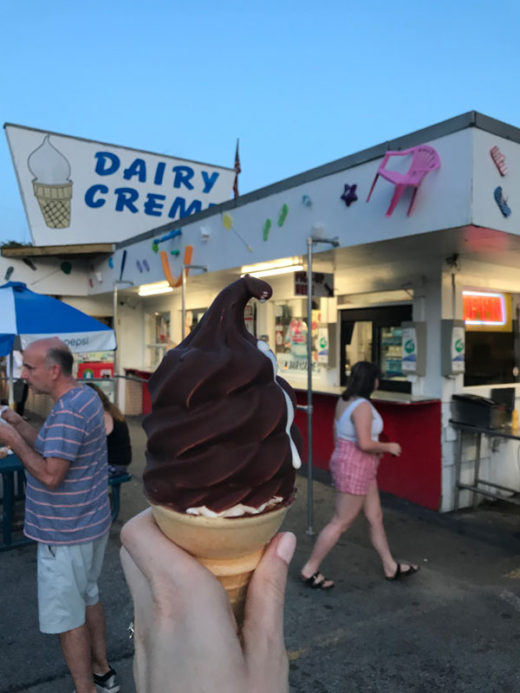 As a kid we always spent a couple weeks each summer in New England. It’s been fun to adopt it as a place I go as an adult too.

I realize summer has come and gone, but this was too fun an adventure not to share! I’m currently taking a break from all social media, so I thought it’d be a good excuse to get back to blogging. I usually share more of my travels in my weekly newsletter and on Instagram as it happens.

The Colorful World of Hassan HajjajUrban Antacara: a journey of self-discovery