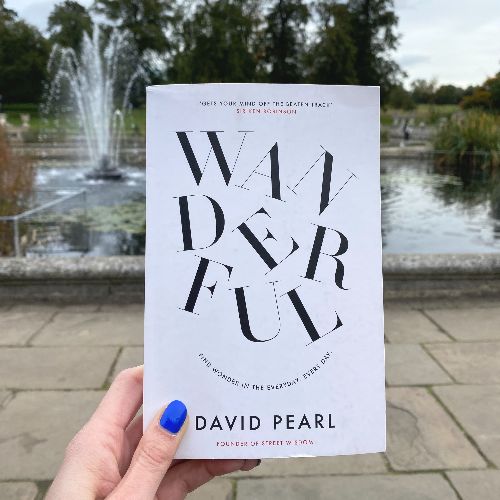 What if the world around us held more secrets than we realized? We’re so busy rushing through life, what happens if we slow down and really look at the world around us. That’s the basis of Street Wisdom, an incredible experience dreamed up by David Pearl that is “an everyday creative practice you use as you walk. A smart fusion of mindfulness, neuroscience and wellness, it unlocks our minds and unblocks our creativity with every step.”

I have yet to experience an in person Street Wisdom “WalkShop” (they’re totally free by the way), but I’ve now experienced it twice online through a CreativeMornings FieldTrip hosted by David Pearl himself. Even for someone who considers themselves an everyday explorer, this experience is profound. Sometimes it’s what you experience yourself, but also witnessing what others take away (and others may help them see) is powerful.

It all starts with a tune-up: three shorter exercises to get you moving through and looking at the world in different ways—paying attention to what you notice (and don’t), slowing wayyyyyy down, and practicing gratitude. (You can download the audio guide on the Street Wisdom website, or find the soundclips on Spotify.) Then you head into the quest and you ask yourself a question which is revealed to you as you wander. This may sound crazy, but Pearl reminded us we may not find our answer until the very last seconds. In addition to observing the signs around us, what we learn from the session may also come from talking to someone else.

Let’s back up to my first Street Wisdom experience back in June. I experienced it from home making it less exciting than exploring the world—at least so I thought. I have to admit it was a day I was only half participating, and it was at the very end when someone else shared their experience (and someone else had a beautiful interpretation of it) that I was fully hooked. Fast forward to later that evening when I went outside for the first time that day (yes, I didn’t go out until 9pm). 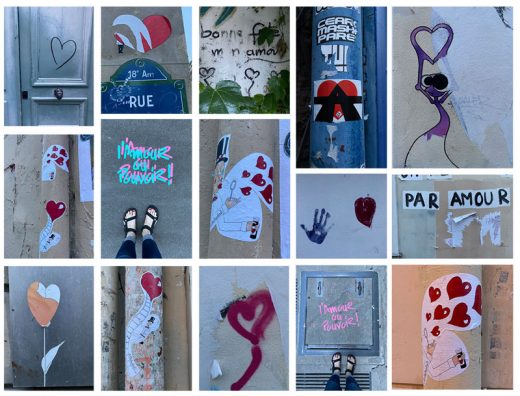 I can’t remember if I had a question, or what it was, but I started seeing hearts. Not just one, but a dozen. All within a few block radius of my apartment, all within an hour, none of which I had ever noticed before. It seemed to be Street Wisdom at its finest‚ helping open your senses to what is right in front of you. The thing is that I haven’t stopped seeing hearts since that day. And the kind of hearts I see—street art, on clothing, tattoos, shop windows, sidewalk chalk, a chipped piece of paint, heart-shaped leaves—continue to surprise and delight. I’ve not tried to force anything or what it means, but love the idea that love is all around me.

I can never force seeing a heart, but sometimes I’ll wonder if there’s a heart over there, look over my shoulder, and see one. And this can happen multiple times on a single street. I’m not sure if hearts are just trendy right now, but I do think there’s something more at play. (And as I type this I looked up to see a heart on a banana left over from a banana map someone left behind from my workshop yesterday.) 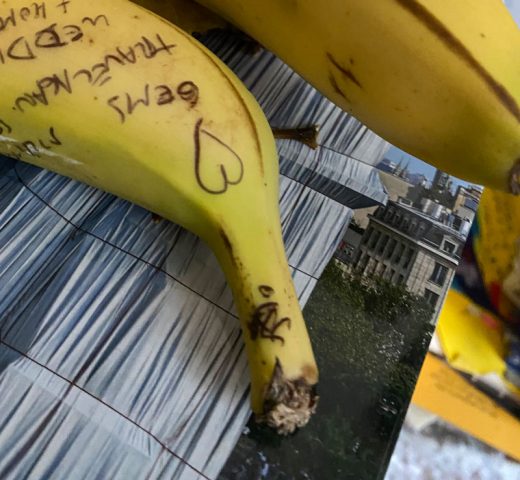 When I knew I’d have a chance to experience Street Wisdom for a second time and could do it while out walking (and joining the session from Zoom) I jumped at the chance. I was leaving a friend’s place, so it was nice to be in less familiar territory. I knew I was generally headed towards home but I let the “tune-ups” guide my way and the streets I took.

Then “The Quest” started. I heard voices speaking, and saw hearts. I passed a new chicken place (possibly one a friend had recommended, or so I thought). While it kind of felt like cheating, I decided to get chicken tenders for dinner. While I waited, I continued to look at the world around me. “Look, that coat is like Sherlock Holmes” I heard a woman say to her husband as they passed by the shop next door. I’m not sure I would have had the insight of being a detective had she not said that.

I kept wandering up the hill towards home—Sacre Coeur, which as David Pearl later pointed out is another heart (coeur = heart in French). I now was excited to eat my chicken tenders but I didn’t take the shortest route home as there was a gaggle of humans in my way, so I opted for a much quieter street.

As I made my way up this detour I found myself face to face with a green moving truck with the tagline, “moving your way.” This sentiment was completely in line with so much of what I’ve been exploring in my own work (and different versions of the idea appear all over my 2021 vision board). To me it was a profound sign. 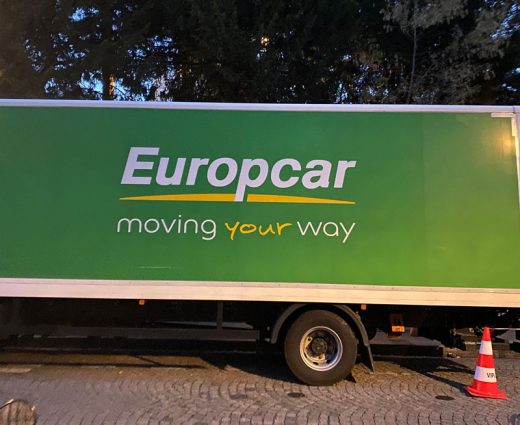 The 15 minute “quest” came to an end and Pearl invited a few people to share what they had learned from the wisdom of the street. I wouldn’t learn until later that at least 2 or 3 of them were members of my Mapping Your Path community who happened to get called on! Hearing the insights of others is so rich—it helps you see what you just experienced with your own eyes.

As the debrief continued, I realized the green moving truck was part of many white trucks that I had seen earlier that day while on the way to the pool. Living in Paris I’ve come to recognize the presence of these trucks as a sign that there is a movie being filmed near by. When I had looked at the sign (a literal one—a permit!) earlier that day it had said the film was called “Caravaggio” which didn’t speak to me much. In hindsight, the presence of so many trucks meant I knew it had to be a bigger budget movie. (The only time I had seen more trucks was when “Mission Impossible” was shooting in Paris.) 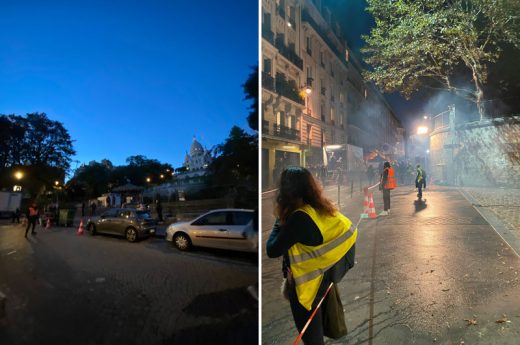 Unlike earlier in the day though, now something was happening. Street Wisdom had taken me onto an actual movie set in my neighborhood. The big lights were up, tents for the crew, and staffers in vests directing traffic and people. Lots of people were around so it seemed like a big deal. I took a cue from David Pearl, and asked someone if they knew what was being shot. The guy next to me said “Keanu Reeves” and then I heard John Wick 4. Now while I’ve never seen any John Wick movies, I have a big admiration for Keanu and the type of actor he is in Hollywood. This was suddenly worth sticking around for.

The hour Street Wisdom Zoom session was starting to wrap up, as I was getting this intel. But it arrived just in time for me to share it in the chat. This may have been a Street Wisdom first. Alexa from the CreativeMornings team says over the Zoom, “say hi to Keanu for me, Anne.” No, no, I wave, I haven’t met him. The call ends, and my phone battery is low.

A few minutes later cars arrive apparently Keanu Reeves got out of the car. I looked for him, but I didn’t see him. But now I had confirmation that I was indeed in the presence of Keanu Reeves.

Mind you, at this point I start to realize the power of my “frivolous” stop to get chicken tenders for diner. That few minute wait for my meal delayed me just enough to hit timing where Keanu and I could cross paths! Practical me would have sent me straight home to eat my dinner while it was hot. But Street Wisdom me encouraged me to cross the street and see what I could see from the other side. 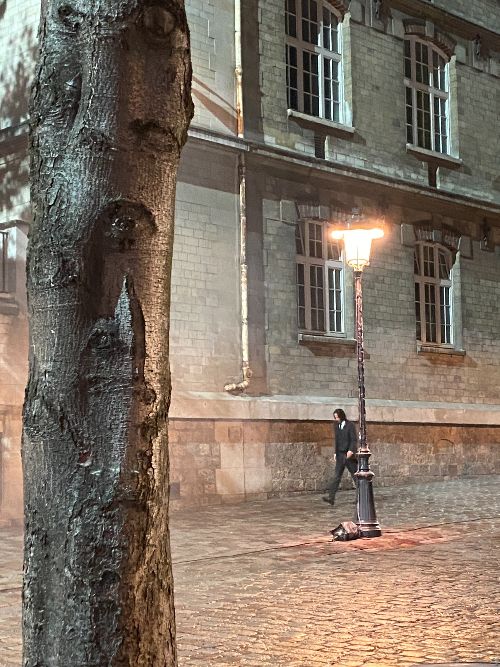 Not long later, accompanied by the sweet smells of my dinner wafting from my tote bag, a figure walked along side the stone wall. I recognized that figure. This time I really did see Keanu Reeves! Wearing a suit and strolling with a revolver. The couple next to me and I had our phones out filming, as we looked at each other with giddy excitement that this was happening. (There’s footage on my Instagram post!)

Part of me was curious if it was actually him, and not some stunt double. But his walk is so distinct I knew it had to be him—and when he turned around to head back up the stairs—after giving a crew member a fist bump—I got a better look. It was Keanu Reeves! I later learned (from sharing on social media) that the man in a sweater he was strolling with was his stunt double and the director of the film. My curiosity got answered without me even asking out loud!

I waited a bit longer, hoping to see a scene being filmed while befriending a Franco-American teenage Keanu super fan and another tourist who had happened upon the set. We chatted and tried to hypothesize about what was happening. But at that point the magic stopped, we were trying to force and control the outcome.

After an hour or so and a hungry stomach, I decided it was time to head home. And when I crossed the street, I had another clear view of Keanu standing on the stairs—the same ones I ran up through lockdown—next to Sacre Coeur. 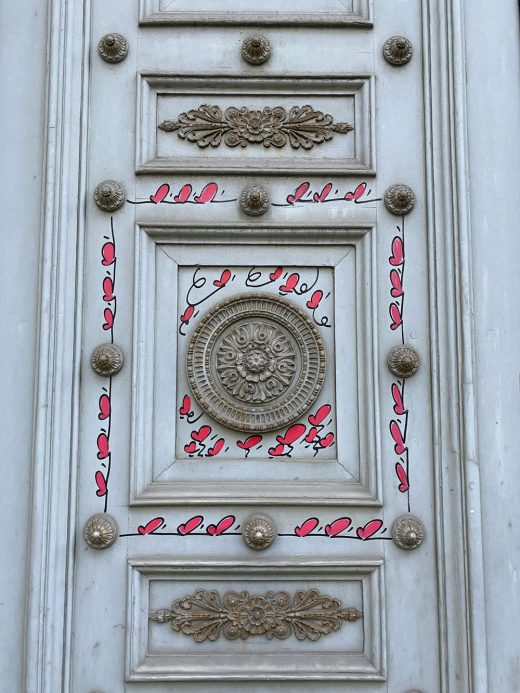 For more wandering inspiration, I highly enjoyed David Pearl’s book Wanderful: Find wonder in the everyday. Every day. Follow Street Wisdom online to learn about their upcoming WalkShops or listen to their audio files online. (The Wanderful–inspiration on the go podcast is fun too—each episode includes a prompt.) You seriously never know what you may uncover…

And to think, this all happened a few hours after I met THE gnome from Amélie!!!! :)

Mini Mapping Your Path into 2022 3-hour workshop (Dec 18)When you get to meet your hero. And your hero is a gnome.