Swimming in the Sea 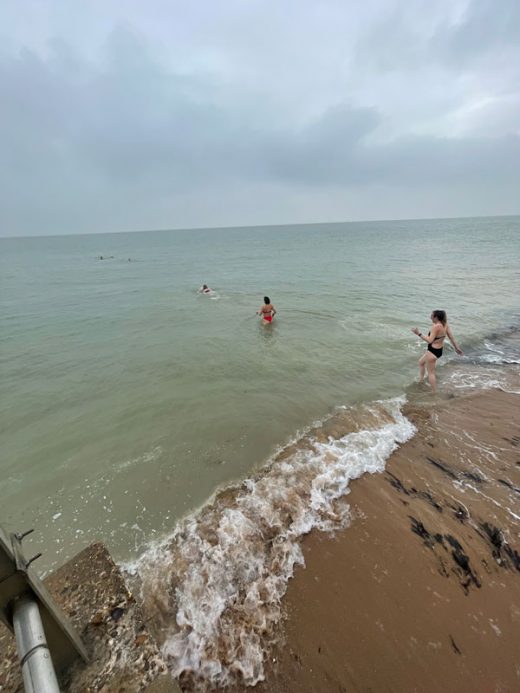 I’ve known there is a reason I always travel with a swimsuit. Sure, there are plenty of times it’s gone unused, but anytime I’ve forgotten one, I’ve regretted it.

When I packed my swimsuit on my recent trip to England it was because I thought I may swim in the Olympic pool (as I’ve been known to do in the past) in London. Little did I know that I’d end up swimming in the sea.

The whole idea of swimming in the sea, let alone in cold water has never been something on my bucket list of life. But then again, sometimes you are just going through life and an opportunity presents itself and you tell yourself, “When in England…”

I hardly even knew I was going to England until a few days beforehand. I booked my ticket on Monday evening and took the first train out on Saturday morning. I guess one could say that last minute decisions aren’t completely foreign to me. 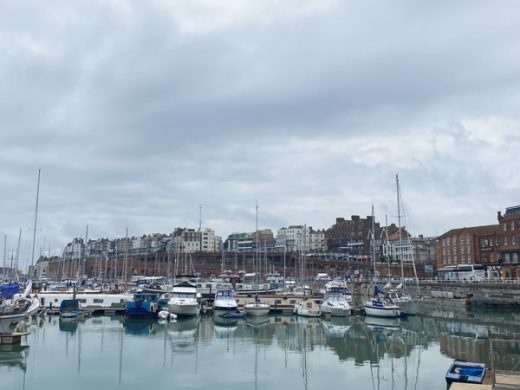 From London I headed to Ramsgate, a costal town in the south east of England, an hour fifteen by train. The town was once a thriving destination for travelers until air travel made it all too easy to jet off to further destinations. All the shops are local (with the exception of Waitrose and KFC), and I’ve never seen such an eclectic display of barber shops. Ironically, the pandemic was good for costal living as people were eager to leave the constraints of big city living.

I was there for my friend Kristina’s celebration of her wedding. I didn’t know quite what I was getting myself into (and honestly was worried my pandemic anxiety wouldn’t permit me to be there). But sometimes that’s what makes life fun.

Swimming in the sea wasn’t an official wedding activity, but throughout the evening the seeds were planted. I kept meeting the groom’s relatives and family friends who have made it their practice of swimming in the sea.

“You’re welcome to join us tomorrow. We’re going at 2pm.” Which I promptly ignored.

The next morning after the wedding festivities, there was a walk on the beach. Little by little people dropped off to go catch flights. As we were walking we ran into one of the couples I had chatted with at the bar about sea swimming the night before. They were out walking their dog, and I was most surprised to see them. It was another strange moment of, “I’m seeing you, I feel like I’m supposed to go for this swim.” 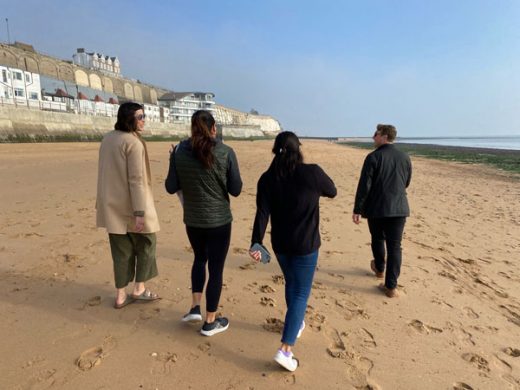 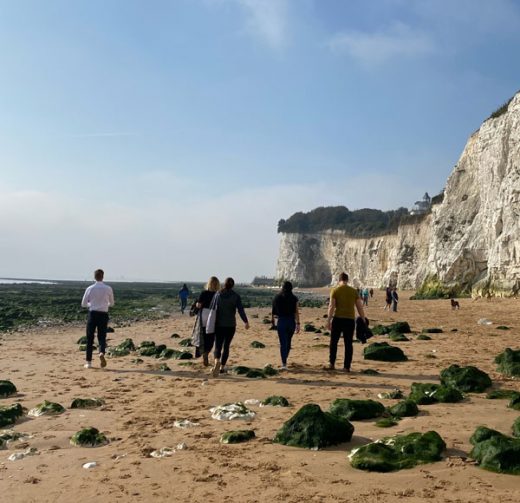 (Morning low tide beach walk while the sun was still out.)

Of course the catch was that while I never travel without my swimsuit, it was back at my hotel. (I had prioritized my umbrella that day.) Then by a little bit of magic, a friend of the bride—who also happened to be her former swim coach—said he could give me a ride. So he dropped me at my hotel, I power walked 45 minutes back to the swimming area: Dumpton Gap. Of course by the time I got there the sun had fully disappeared, the beach we had walked on that morning during low tide had nearly vanished, and the sun had gone with it. There even was a fine rain as well. 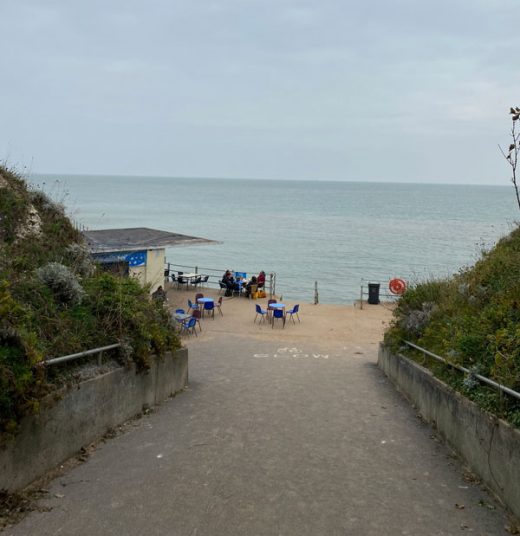 (Dumpton Gap where we had walked on the beach at low tide that morning, now under water.)

When I arrived the groom’s mother, sister, mother’s best friend, and another friend of theirs were setting up their folding chairs. I had no idea a swim would be such a production. I soon learned that’s what makes it utterly fabulous. 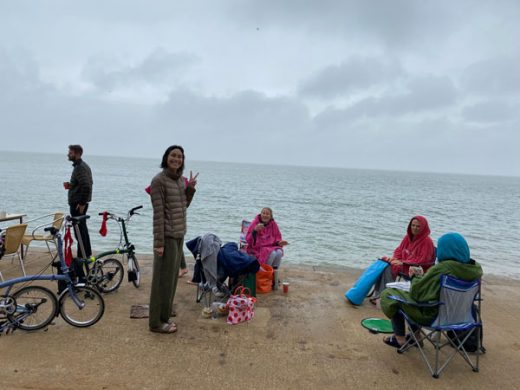 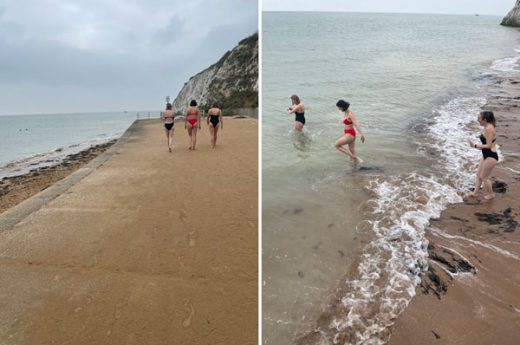 I later learned that the temperature of the water was ~13*C/55*F. As a general rule of thumb you stay in the water a minute per degree. Too long can be dangerous. 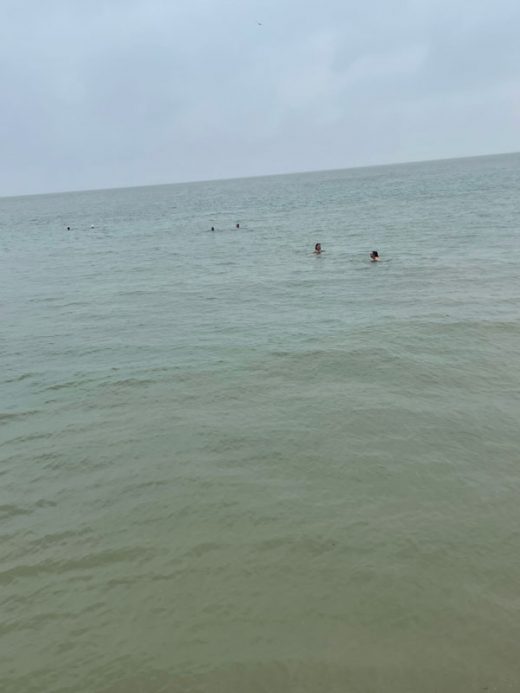 (That’s my head closest to shore on the right!)

The whole experience was terrifying and freezing and I made my friend (the bride and swimming/adventure buddy) hold my hand at one point. It was actually hilarious. (This was captured on video—ha! It’s like you could watch my brain trying to talk me out of ever step.) It took a lot of gentle nudges from Kristina, “It gets better once you’re fully in, trust me.” There’s a lot to say about trust in life. 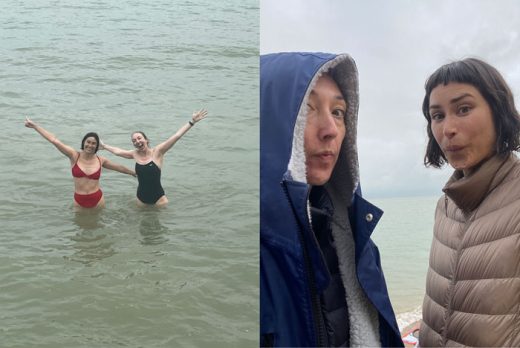 And then I made it, and it was magical! I didn’t want to get out. But they assured me I had to as it was quite cold.

There was hot tea and dry towels waiting on the other side. We changed out of our suits. They all had the perfect oversized hooded towels that were like having your own private personal dressing area (they typically have a beachside cabin, but those closed up a couple weeks prior). I was grateful for the extra massively oversized jacket I got to borrow (they’ve learned to invest in all the right accoutrements for sea swimming), as despite wearing my heat tech, bulky sweater, and puffer vest, my body wasn’t quite used to this. Wow, was it invigorating though. 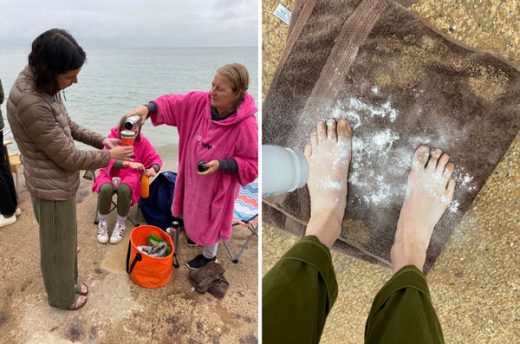 I also learned that baby powder is a great way to get the sand off your feet. They knew all the tricks! It became this wonderful cultural exchange, but it wasn’t just British vs. American, but sea swimmers vs. pool swimmer. There was a lot we could learn from each other. It was such a special experience. If I lived there I’d definitely be a regular! I love that they’ve made it a social circle too, and make sure to go at least once a week. 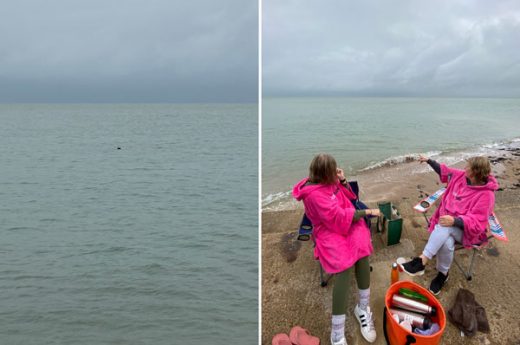 (After our swim we even spotted a seal!)

I never imagined sea swimming would be such an exercise in facing your fears, being brave, and trusting the world around you. I never thought I’d do this, and I’m forever grateful for this opportunity. Less than one week later, and I’ve already seen it pay off in facing other fears. But you’ll have to wait for the next post to see how…. ;)

Thank you to Kristina’s dad for capturing us in the water!

P.S. This free documentary My Big White Thighs & Me: a story of womanhood & swimming (25 min) was another seed planted in me a year ago that made me realize swimming in the cold was something people really do.

P.S.S. You may recognize Kristina from when we went time traveling at the TWA Hotel! We do know how to have a grand adventure! There is usually an awesome swimming experience involved too.

When you get to meet your hero. And your hero is a gnome.Arc de Triomphe, Wrapped (Christo + Jeanne-Claude)