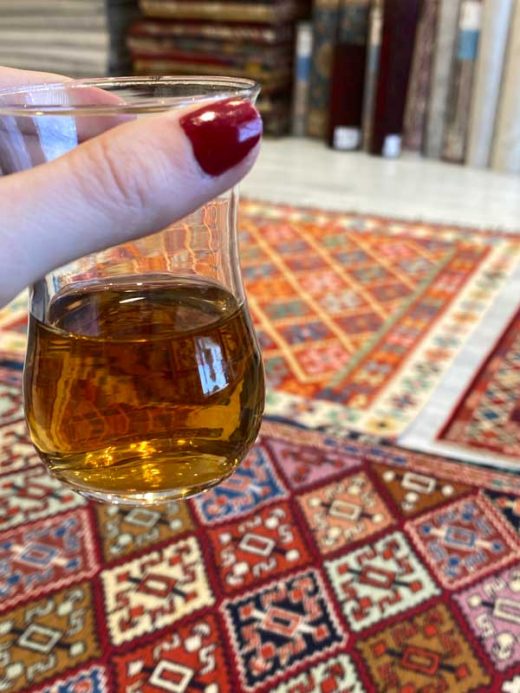 I wasn’t supposed to be in Istanbul. I booked a ticket with 10 days of notice after hearing a friend would be there for work and knowing I needed to escape the ghost town that would be the first week in August in Paris.

I had very little intentions for this trip. A friend was going to be there for work, which was just the nudge I needed. I just had the pull to go for reasons I couldn’t explain. There was a clue on my vision board of a beautiful view with a minaret. I knew where I was going to stay the first two nights (the INCREDIBLE Hotel Mest–see here + here), but beyond that, the rest would unfold as it would.

Little did I know just how big (and hilly) Istanbul was. Hotel Mest put me on the Golden Horn side of town, an easy walk to the Hagia Sophia (a must given my art history studies) and Blue Mosque.

My first full day in town I decided to venture to the Hagia Sophia. At one point I veered off Google Maps directions when I saw a couple places that I’d starred on my map that were recommended by a friend. These put me on a street I wouldn’t have been on.

The next thing I knew there was a very attractive Turkish man stopping me in the street. The conversation started by telling me how crowded the Hagia Sophia is right now and he recommended the Cistern Basilica (that actually was on my radar thanks to another friend). I knew the Hagia Sophia was my priority.

We keep talking and I’m very aware of what’s happening. He tells me he likes practicing his English, his family has a business that sells carpets, that I’m very beautiful, I have great energy. I tend to pride myself in my stubbornness (there’s no way in hell I’m buying a carpet), but there was something about being in a foreign land that feels very different from my daily life I was up for a bit of an adventure. 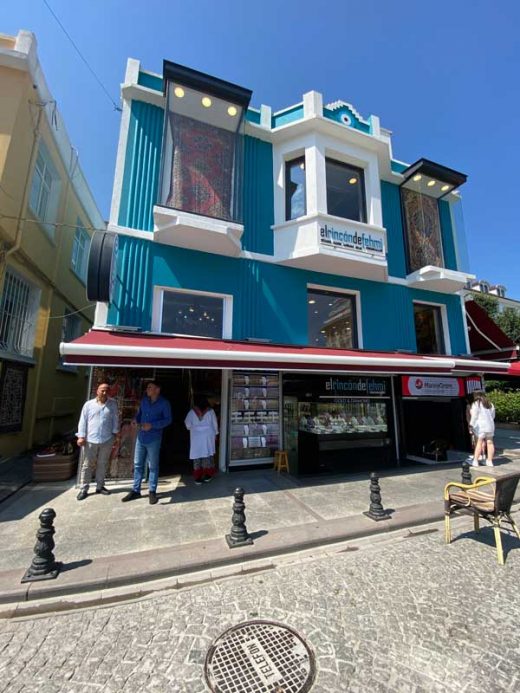 I’m now sitting upstairs in the shop. I’ve been handed off to the uncle. I thought my hot new friend would be joining us, alas not.

They find out where I live. Paris. They definitely understand Paris apartments are small, which I appreciate. The tea arrives, as does some water.

The entire process is fascinating. An art that’s been perfected for centuries.

I’m sitting on the couch. The uncle is on the single seat next to me making small talk. The next thing I know two men are unrolling rugs—which are piled in stacks around the room, making me reminiscent about my childhood and wanting to jump all over the piles while rug shopping with the family.

The “nicest” fanciest rug goes down first. It’s on the right.

Next to it is a similar rug. I later learn that there is a 500€+ price difference between the two.

The rugs keep getting unrolled faster and faster. 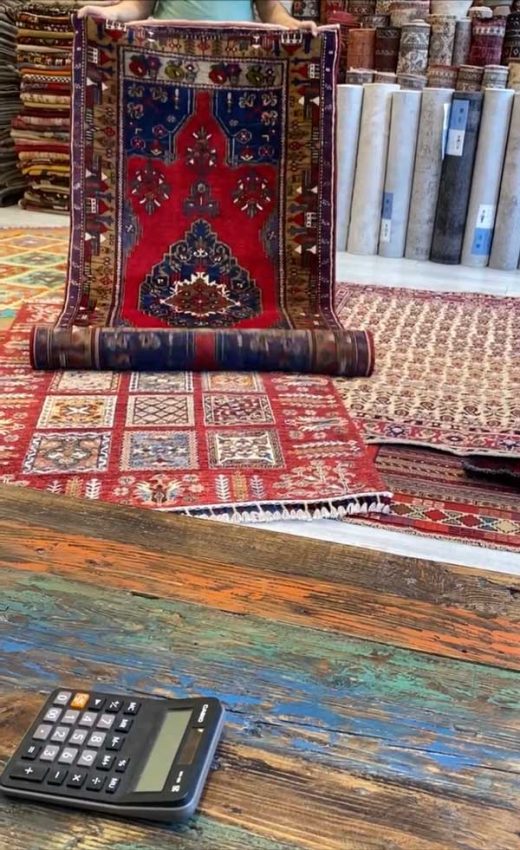 “Which one do you like?” and then I’d point or say “that one.” I’ve come to realize this is an incredible strategy of life. We often need the comparison between possibilities to really get clarity on what we like/want.

More rugs came out. I could say no right away. I don’t like those colors. No, not that pattern. Not my style. 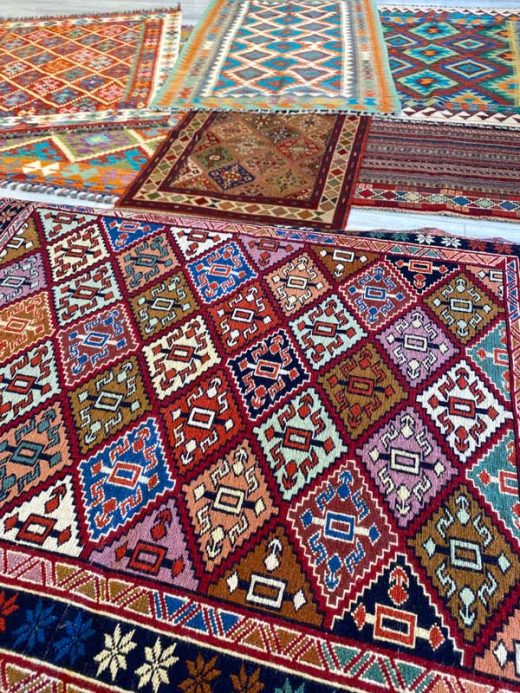 I’m not for certain, but I’m fairly certain that the rug I liked best was rolled out early on. The points of comparison allowed me to see what I liked in the process. It happened so fast I didn’t have time to overthink for once. But ultimately, it came down to feel.

Then we finally get to talking about price.

I’m still in my typical stubborn mode. I’m fully convinced I’m not leaving with a carpet. Perhaps this tactic helped me in the end.

The next thing I know the carpet price is dropping 150 USD. Less scary, but still I don’t need a carpet. Besides, the idea of having to get it on the plane was a nightmare (if I wanted another bag I’d have to pay for it).

My not budging is paying off. I try to explain that my apartment is small and there isn’t even room for a carpet. I don’t need a carpet. I’ve never wanted a carpet. (And in the meantime in the background I’m starting to dream about a future dream home with a carpet.)

“What about shipping?” I ask. Ok, that’s included. “And customs?” (I knew I’d had to pay customs on the past 5 gifts shipped to me that were tiny, so customs on a high-priced product terrified me.) Yes, customs included.

Uh oh, the needle is starting to move. I’m rather entertained.

The other carpets have been restacked. The helpers have retreated.

Mind you, I don’t even have any idea what size this carpet is or what size would fit in my living room.

I stayed seated on the couch. Drinking my tea. Drinking the water. The carpet came towards me — “here, feel it, look at the quality.” Funny, at this point I didn’t even care to go have a closer look.

I agreed. Ok. I’ll take it. I started laughing, and kept laughing all day. What just happened?!?!

Friends later asked what carpet I bought and I barely had an answer besides a laugh. I said, “I think it’s this one.” 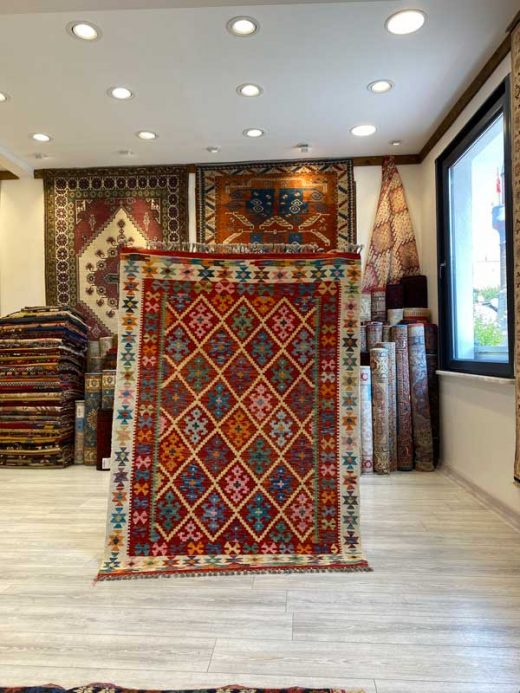 I walked out of the shop and ran into the “lure” who had been out working his magic trying to find more customers. I laughed and said, I hope you get a good commission. (It was 11:11 —my magic number when I left BTW). I’d later run into him again and he showed me just how insane the Hagia Sophia line is and took my photo at the Blue Mosque (which he warned me was under construction). 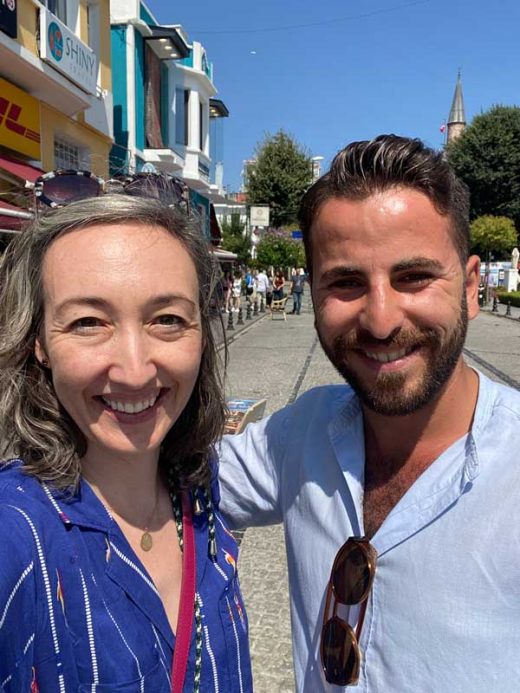 I should have business expensed my carpet because it seriously was a masterclass in selling.

In my terms we even specified that the carpet wouldn’t be shipped for a few days as I wouldn’t be home to receive it. Did that happen? Of course not. But I bought a carpet!

I was the first sale of the day, so was told I got a good deal and would bring luck to the store for the rest of the day. Did I get a good deal? I have no idea. I think so. What I did get was a good story, and a carpet I absolutely love.

It’s funny. When it arrived the package was much smaller than I expected. And then there was a layer of padding. Was this even my carpet? Whew. It was.

Knowing I never got off the couch or stood on the carpet, or asked what size it was, I really had no idea what I was getting into. I had invited a friend who has strong muscles thinking I’d need help moving my couch. Alas, I didn’t need the hand at all, but still, it became the perfect excuse to have a couple friends over for what became my first “magic carpet party.” 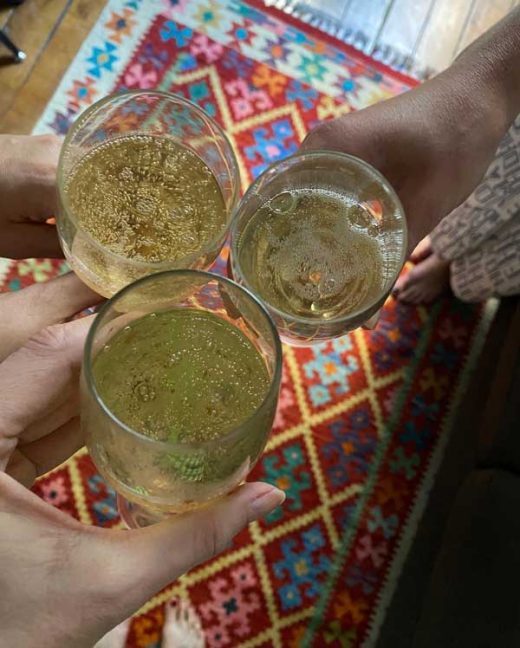 The late Ann Hamric, a friend’s mother, once said in her Last Lecture Series talk that she always keeps a bottle of champagne in the fridge in case there’s something to celebrate. This was cause to celebrate. I bought a carpet in Istanbul! It was accompanied by the Turkish Delights my hotel had gifted me on my way out, and some pretzels in the container. Classy ;) And of course good conversation too! 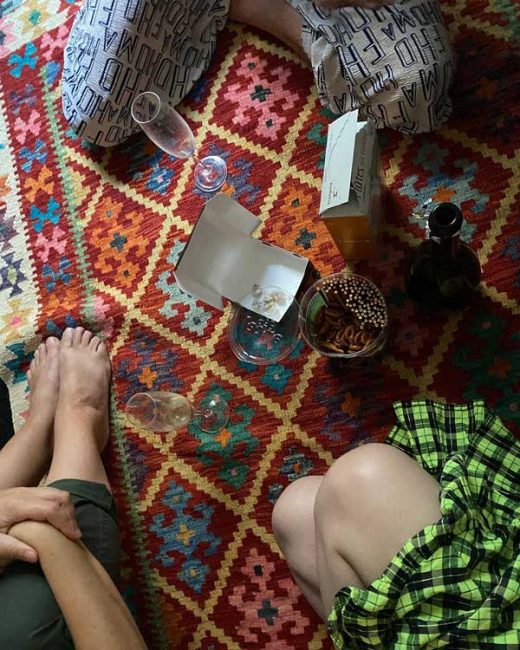 We had the best time, and I realized the carpet was more than a carpet.

The day before I had the urge to take all the post-it notes off my walls and clear my desk to a clean slate. I’m definitely not a minimalist, but tend to operate in stratospheres of piles. It was a big departure. Then the rug arrived and EVERYTHING CHANGED. My room that had become a frozen time capsule of creative inspiration was transformed instantly. 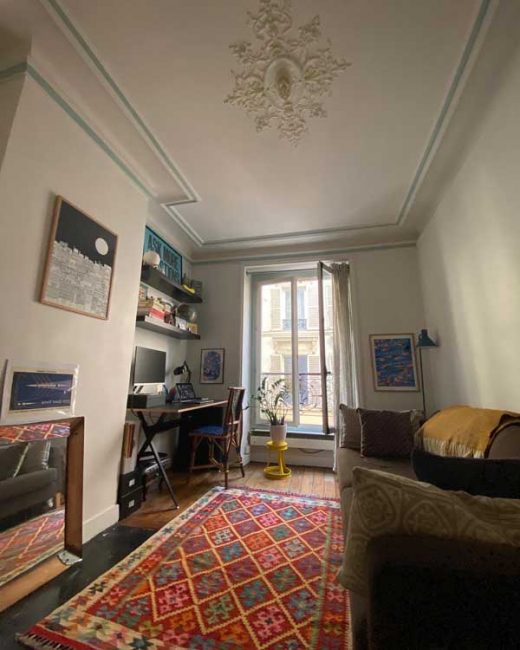 My entire space came together (and has even been updated since this photo). The colors of the carpet even pulled together my swimming pool art on both sides of my living room. I never would have picked this carpet or these colors had it not been for the “comparison game.” Perhaps my subconscious was at work because I really think I was operating by feel—a theme of the entire trip.

In the words of Marie Kondo, my carpet “sparks joy.” On a daily basis I tell my carpet I love it. Ha!

I see the magic carpet as the carpet found me, I didn’t find it. I didn’t know I was looking. However, it’s unlocked so much. It was like the first domino pulling my apartment together. I’d done a lot of work last fall going through my stuff and “making space” (shout out Paul Sockett for support on that front). It was subtle at the time, but all the groundwork I laid then meant everything now has been super speed.

I cleared my hallway, removed my workshop table, bought new bedding (a matching set and found the perfect accent pillows). It’s been fun, rewarding, and just flowed. And with it I started writing again too.

So yes, while we may not need a new carpet. Sometimes what we’re buying is more than just a carpet. It’s an investment in ourselves. It’s a story. It’s something to weave everything in our worlds around us together.

For more fun from Istanbul, check out the inspiration that kept appearing all around me. I swear there was magic a play in that city.

P.S. Mapping Your Path into 2023 opens for enrollment in mid-September. The 3-month workshop + community is designed to get you thinking about how you want to go into the new year with intention, while getting creative, making maps, being connected to an incredible community around the world, and having a ton of fun. Click here + sign up to be notified. Click here to see my 2022 map.

Detours in the right direction: Avignon adventureA trip to a snail farm + the season of slow