A story of magic and the British Pullman 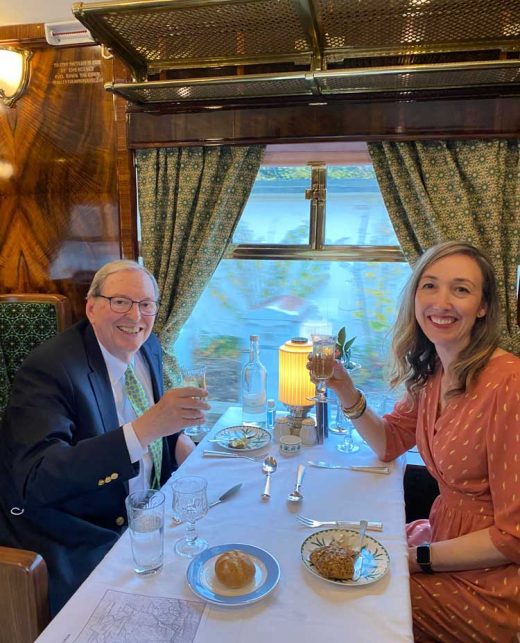 A year ago today I offered my dad a ride on the British Pullman for his 80th birthday. For two Americans who live in the US and Paris, gifting a gift that took place in London was not the easiest gift to make happen. I hadn’t quite considered how we’d be in the same city, but those were minor details. Still, it was a crazy idea I got a few days before his birthday and stuck with it. I didn’t need to have it all figured out. I just needed to tell him about it.

It’s honestly something I thought we’d do in summer at the earliest, but the day after his birthday my dad found out he’d be passing through London for 24 hours on his way home from a business trip to Kazakhstan in two weeks’ time. Yes, at age 80 he was traveling to Kazakhstan.

As the trip was less than two weeks out the train—the fancy British Pullman with lunch—was fully booked (it was one of the Saturdays with a steam engine, clearly making it a popular pic too). Despite not having a place on the train but we decided it was a good idea for my dad to take advantage of the 24-hour stopover, and I’d come to London on the Eurostar to meet him.

I will never forget the magical day when everything came together: 11/11 (November 11th) which I later learned 11:11 is a magical number to many people. Not only did I get word that tables had opened up on the train, but my goal from the start—a table on the newly designed Wes Anderson car—became available! Clearly this trip was supposed to happen. Yes, it was splurgy, but for a man who loves trains, it couldn’t have been better! (It also was a fascinating contrast to our previous train adventures in Vietnam in Feb 2020!).

The actual trip didn’t happen until Nov 20th. While not my dad’s actual birthday, the magic of the fact that we rode this train on what would have been my grandfather’s birthday (my dad’s dad). (The strange thing is that the temperature was 11 degrees C too).

My dad flew in from Kazakhstan that morning, and I was on the first train out of Paris that morning. We miraculously arrived at the hotel within 15 minutes of each other. It would have been the same time, but I stopped to get my Covid test (required at the time) upon my arrival.

The biggest surprise to me was that my dad booked the hotel where my mom had told him she was expecting me on the way back from a business trip! He told me I had been to that hotel before. I figured it was my first trip in high school. Nope, it was in utero.

We both dressed for the ride not knowing if we had time to change before the ride. And yes, my dad specifically picked a tie to go with the Wes Anderson interior. 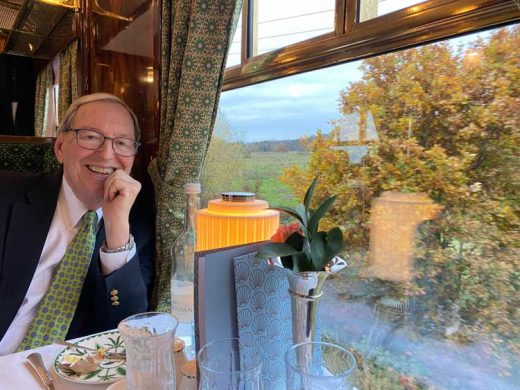 The train left from Victoria station where there was live music as we checked in. We checked and once boarding opened took a stroll to check out the train (each car has a slightly different interior, I’d been on it before when I had the chance to ride the Orient Express). We even got to check out the steam engine which is a huge endeavor to get going (like a day!) but there’s a whole organization of engineers who are preserving the tradition. 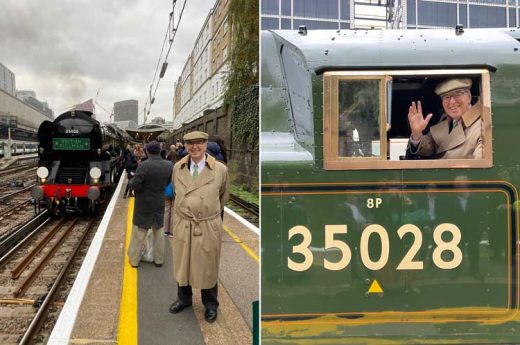 Once we got to our seats/table, we were served champagne and were on our way. We loved our multi-course lunch and 4-hour ride while we did a loop (down towards Guilford) as we were pulled by a steam engine. 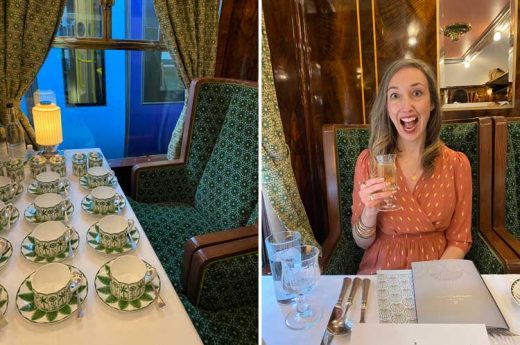 The other awesome thing about this experience was that the train plays a role in Paddington 2, which happens to be one of my dad’s favorite movies. Conveniently we were staying at Paddington Station so we got to visit him as well. 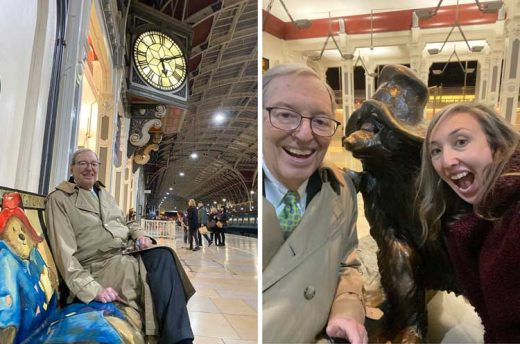 So here’s to dreaming up crazy ideas, and believing they can happen—and faster than you expect—even when the train is sold out. 🥂🚂 HAPPY BIRTHDAY, DAD!!!!